The restaurant for microbes

This article explains how different species of microbe use different nutrients to provide them with energy they need to survive, grow and replicate.
© University of Reading

In the previous Step, you learnt how microbes reproduce. If a microbe replicated without also growing, the daughter cells would get smaller and smaller and very quickly go extinct. Different species of microbe use different types of nutrients to provide them with the energy and building blocks they need to survive, grow and replicate. Microbes can use a much wider range of compounds for nutrition than animals and plants.

If there was a restaurant for microbes, what would be on the menu? 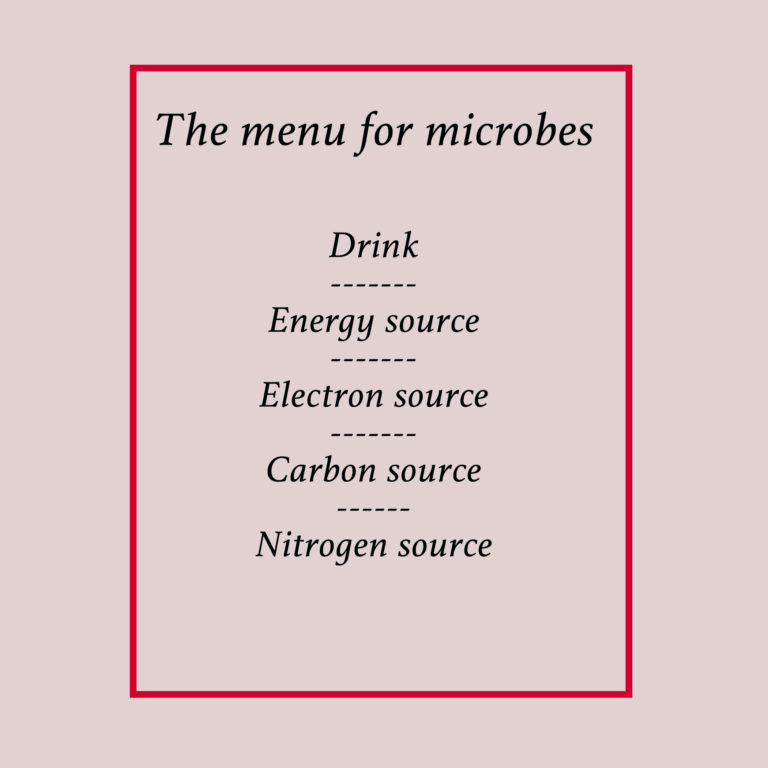 Microbes have to obtain something from each of the courses on the menu in Figure 1. Let’s look at the types of options.

The only option is water!

All living organisms must get sufficient water from their environment to survive and grow. Microbes are approximately 70% H2O!

Energy is required to:

3) perform mechanical work e.g. energy is needed to power the rotation of flagella to enable bacteria to swim in liquid.

Phototrophs get energy directly from sunlight via photosynthesis, whereas chemotrophs get energy from inorganic (eg sulphur, ferrous iron, ammonia, nitrates) or organic compounds (eg sugars, lipids, proteins, nucleic acids). Either way, much of this energy is stored in a molecule called adenosine triphosphate (ATP) which is generated during the process of respiration.

Carbon is the main component of cells and is needed to make building blocks such as amino acids, nucleotides, sugars and fatty acids. Autotrophs use CO2 to make organic carbon compounds and are the primary producers in every food chain. Heterotrophs use organic compounds that were ultimately made by autotrophs, either by feeding on living organisms or by using compounds released from living organisms (eg excretion, decomposition).

Nitrogen is incorporated into many important cellular components, including proteins and DNA. Dinitrogen (N2) is the most abundant gas in the atmosphere (78%), but only a few species of microbes can make use of it because it has a strong triple bond that is very hard to break. The enzyme nitrogenase can do this. It converts this N2 into ammonia (NH3) in a process called nitrogen fixation. The only other natural way for N2 to enter the food chain is via lightning, which shows just how much energy it takes to fix N2 into ammonia! Other microbes gain nitrogen from the nitrogen-containing compounds (eg ammonia, nitrite, nitrate, proteins, urea) found in the environment.

For many microbes, finding enough iron is challenging because usable forms of iron are often very limited in the environment. This is particularly true for pathogenic microbes that infect humans as we will find out in the next Step.

Some examples of microbial nutrition

Coccolithophores live in the ocean and are known to form blooms so huge they can be seen from space (Figure 2). They are photolithoautotrophs; they use light as their energy source, CO2 as their carbon source, and H2O as their source of electrons. They generate O2 as a by-product of photosynthesis. Their external structure is composed of scales called coccoliths which are made primarily of calcium carbonate (chalk), so this microbe needs to find plenty of calcium. (Note: other algae and plants are also photolithoautotrophs). 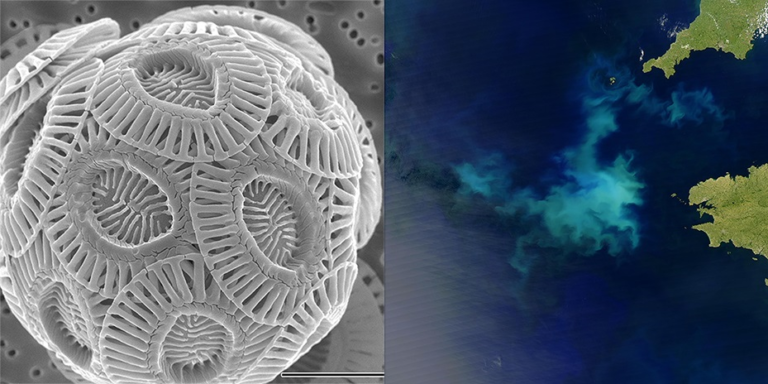 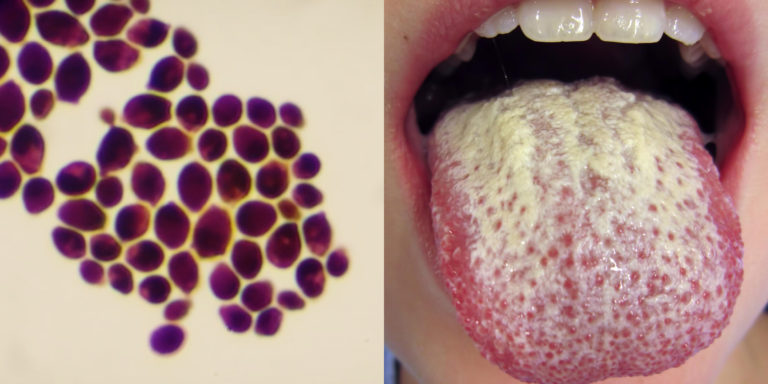 Cyanobacteria are photolithoautotrophs. In addition to fixing CO2 and generating O2 via photosynthesis, some cyanobacteria including Cylindrospermum and Anabaena (Figure 4) are also capable of nitrogen fixation, converting atmospheric nitrogen into a usable form that can enter the food chain. Nitrogen-fixing microbes require trace amounts of molybdenum because the nitrogen-fixing enzyme nitrogenase uses this metal ion as a cofactor.

Figure 4: Nitrogen-fixing cyanobacteria form long chains of bacterial cells. Most of the cells in each filament are photosynthetic, but a few are specialised to fix nitrogen (heterocysts) and have thick cell walls to reduce the oxygen concentration. This is necessary because the nitrogen-fixing enzyme nitrogenase is inactivated by oxygen. Left: Light microscope image of Cylindrospermum © Matthewjparker CC BY-SA 3.0. Right: Light microscope of Anabaena © Kristian Peters CC BY-SA 3.0