Learn more about mole unit and why there is a need to redefine it. 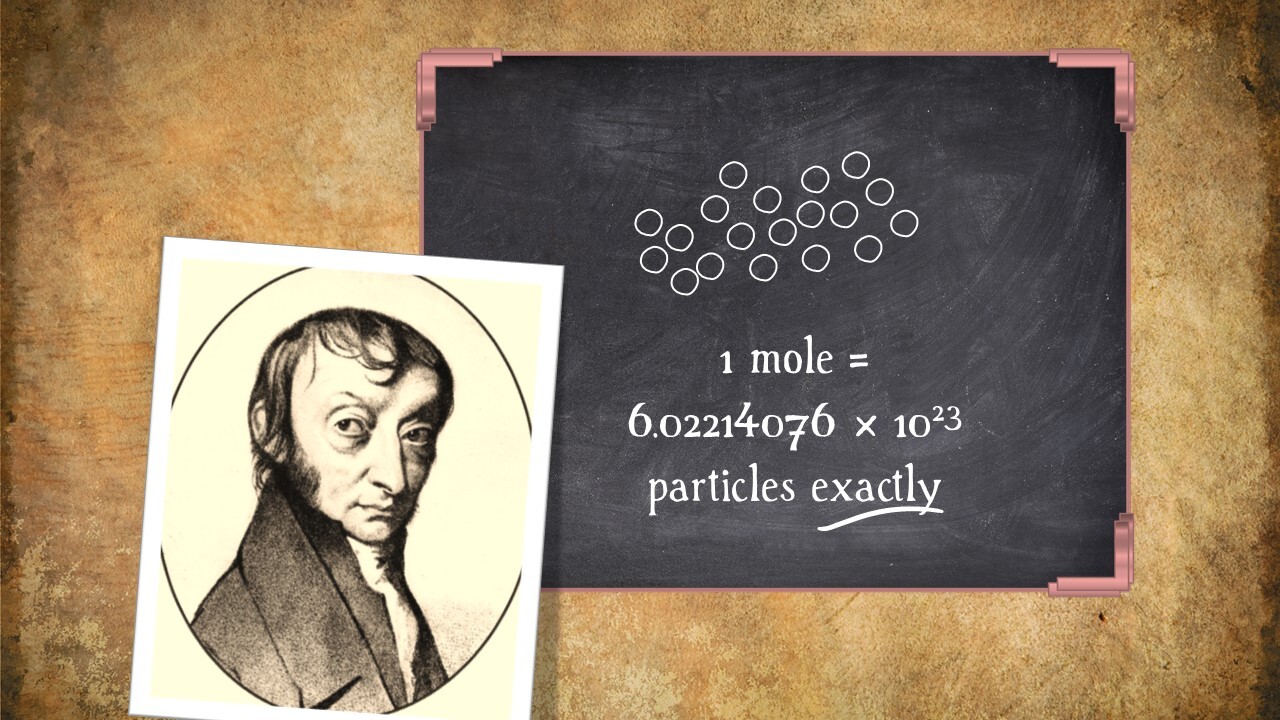 We can convert between moles (the number of objects) and mass (the weight of them) using molar masses. This is also known as relative molar mass, because the mass is relative to the actual weight of a defined standard (historically, carbon-12).

To convert between mass (M) and moles (n), we divide mass by the relative molar mass (Mr).

Historically, the mole has been defined as the number atoms in exactly 12 grams (0.012 kilograms) of carbon. Specifically, it’s a sample that is only carbon-12, as there are several isotopes of carbon that have different masses. The number of atoms in this 12 g sample is known as Avogadro’s number, and until recently it had to be calculated from data – it was empirically derived.

Until May 2019, a “kilogram” meant whatever the official International Prototype of the Kilogram weighed. This was a block made of platinum and iridium in 1889. It’s kept under several locks and air-tight seals to make sure its mass does not change and weighed against copies of it only rarely. But, measurements have shown it has lost mass over the last century – only a few micrograms, but it meant that the official, actual, true value of the kilogram has changed over the course of 100+ years.

After May 2019, the kilogram is now based on Planck’s constant (a fundamental constant of the universe, and independent of any particular physical object. At the same time, the mole was redefined to help clear up any problems.

Various advanced experiments were done to get the error as low as possible before switching to a defined number – one involving chemists creating an ultra-pure sphere of silicone that weighed exactly 1 kg, and measuring it to try and pinpoint Avogadro’s number exactly, and another one from physicists, who attempted to estimate it from fundamental constants of the universe and a few other known factors. Once these values agreed to an known level of precision, the mole was officially redefined to be:

We no longer need to worry about defining the mole against the mass of carbon, or hydrogen, and working around the slight uncertainty in the number. But regardless of what its exact value is, it’s how it’s used that is important. 1 mole of hydrogen gas will have as many H2 molecules as in 1 mole of oxygen gas. When oxygen combusts with hydrogen according to:

Then for every mole of oxygen gas, two moles of hydrogen gas are needed, and two moles of water vapour will be produced. But that doesn’t mean the weight or mass is in an easy 1:2 ratio.

This is summarised below.

The rest of this course will assume you can work with calculations like this. We will need to be able to convert between masses and moles – because it turns out that the behaviour of gases are determined by the number of molecules, and not their masses.