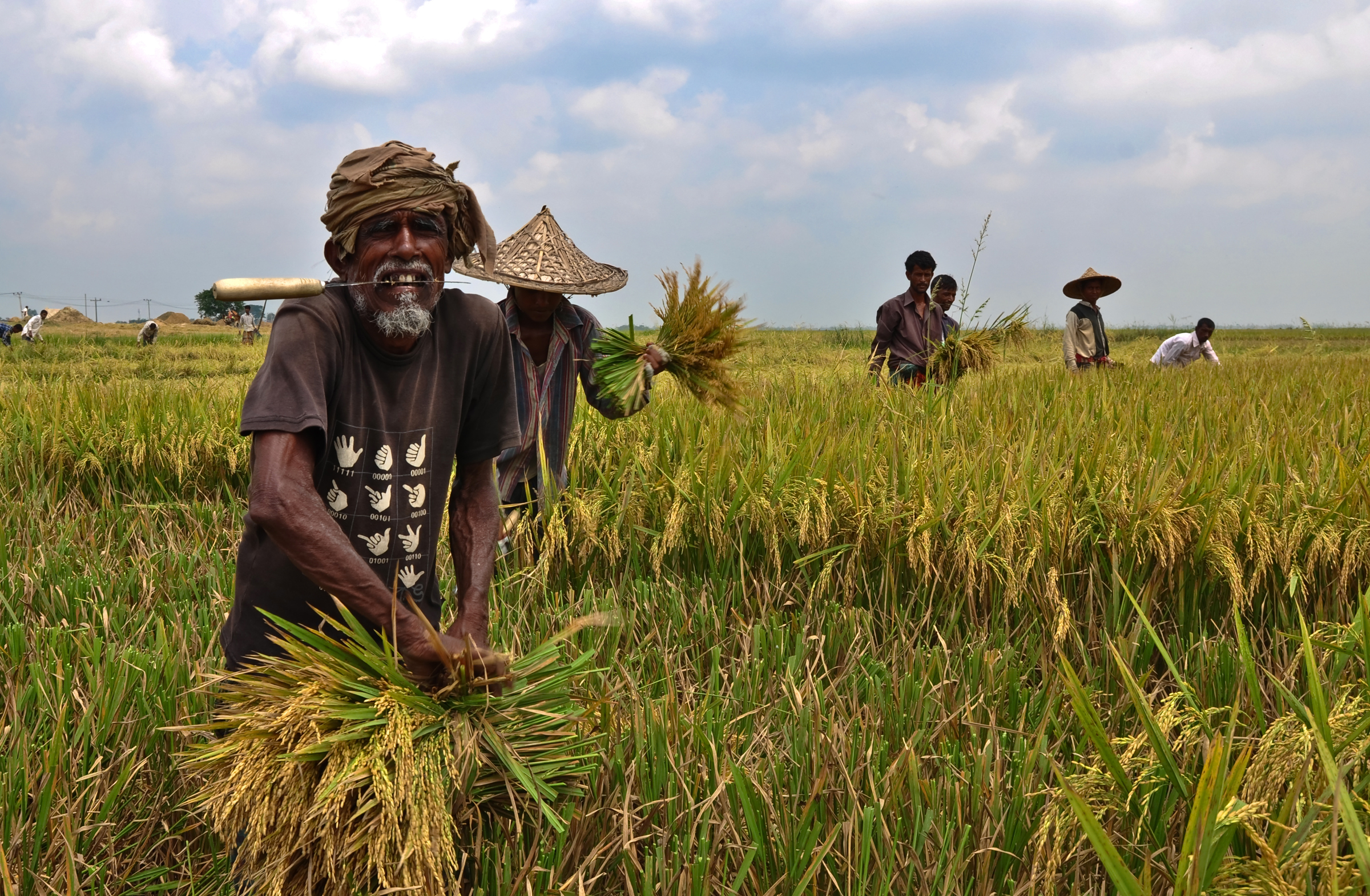 In the article below, Dr. Roberto Bonfatti writes in more detail about two critical steps in the process of industrialization: technological progress and the accumulation of capital. He argues that we should see sustained economic growth only when these critical steps are present.

Let us now consider some of the broader implications of the argument described in the online lecture. In particular, let us focus on the second step of the argument, according to which technological progress can only lead to sustained economic growth in an industrial economy, but not in an agricultural economy.

One implication of this argument is that before economies started to industrialize in the 19th century (the first was Britain with the Industrial Revolution), economic growth should have been non-existent. Was this really the case? Figure 1 represents an estimate of per capita GDP for the whole world between the year 0 and 2000 AD. Per capita GDP is a commonly-used measure of living standards in a country: it measures the value of everything that is produced in a country in a given year, divided by its population. We say that a country experiences sustained economic growth if its per capita GDP grows continuously over time. The striking fact that emerges from the figure is that, indeed, sustained economic growth was indeed non-existent between the year 0 and the 19th century. Furthermore, the fact that the per capita GDP in the year 0 is estimated to have been only 400 US$ (at 1990 prices) – which is commonly considered the minimum income needed for survival – suggests that sustained economic growth was also non existent in the whole of human history before the year 0. To see why, note that, if growth had occurred before the year 0, then this would necessarily imply that per capita GDP in, say, 1000 BC, was less than the minimum needed for survival: but then everyone should have starved to death, implying the end of mankind! 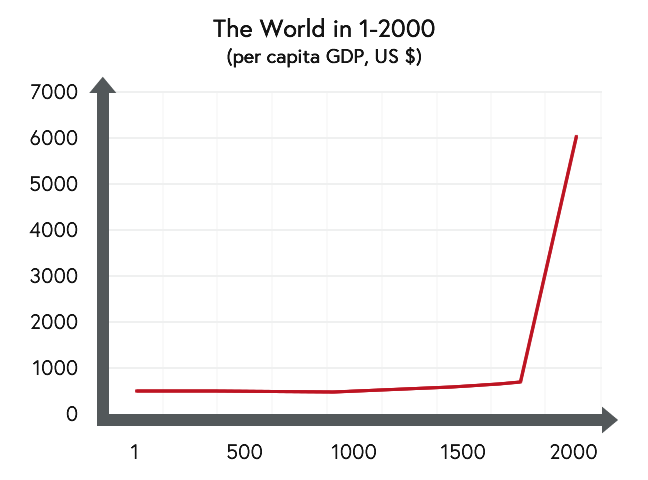 Now if you think about it, the fact that the world economy stagnated for such a long period of time is quite puzzling. After all, you would think that, if just people learnt how to do their job better generation after generation, some sort of economic growth should show up in the long run. And surely the technology available to 18th century Britons was much more advanced than that available to, say, the inhabitants of Roman Britain! However the argument presented in the online lecture provides us with a framework to understand lack of sustained economic growth before the 19th century: technological progress did not lead to per capita GDP growth in pre-19th century agricultural economies, since it was constantly offset by population growth. In other words, 18th century Britons were much more technologically advanced than their Roman predecessors, but this did not make them much richer – it just made them more numerous!

Another implication of our second step is that sustained economic growth should have only emerged in countries who managed to industrialize. This prediction also finds confirmation in the data. For example, Figure 2 shows the evolution of per capita GDP in the 5 largest Western European countries. Clearly, sustained economic growth first emerged in the UK, and it later extended to France, Germany, Italy and Spain. Figure 3 then looks at structural transformation in these same countries over the same period. By economic structure, economists typically mean the share of the economy which is made up of agriculture, industry and services. By structural transformation, we mean large changes in economic structure over time. The emergence of sustained economic growth in the five largest Western European countries was associated with a sharp and continuous decline in the share of agriculture in their economy, or with a pattern of industrialization. 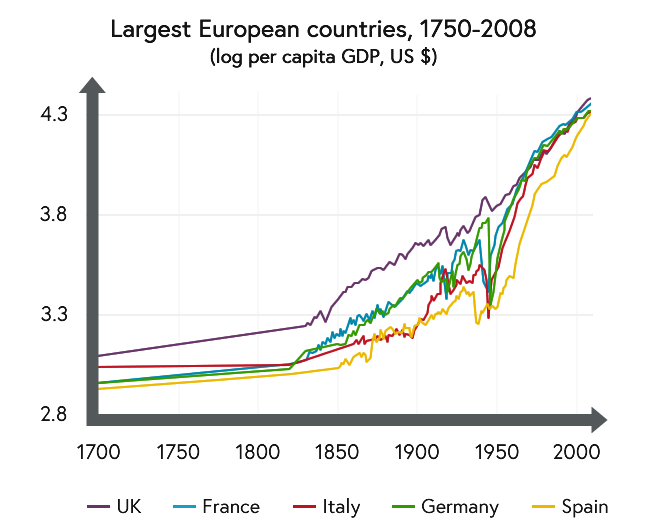 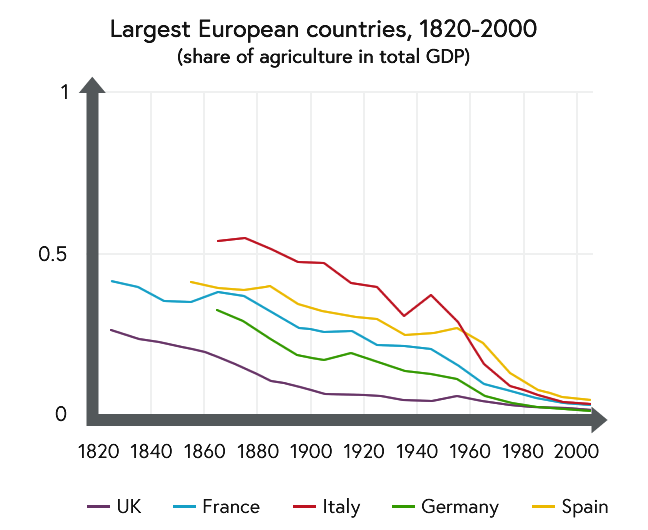 But what happened to countries where sustained economic growth only began to emerge much later? Based on our argument, you would expect that they remained agricultural until much later. And indeed this is what we find. For example, Figure 4 compares structural transformation in the UK to structural transformation in China, India, Pakistan and Sri Lanka. While we have no data for the four Asian countries in the 19th century, what’s significant is that these countries, which we know did not experience sustained economic growth in the 19th century, had still a very high share of agriculture in the 1950s. Such share was very similar to that of the large European countries in the early/mid 19th century. Thus, while countries such as the UK, France and Germany went through early industrialization, countries like China and India remained predominantly agricultural. 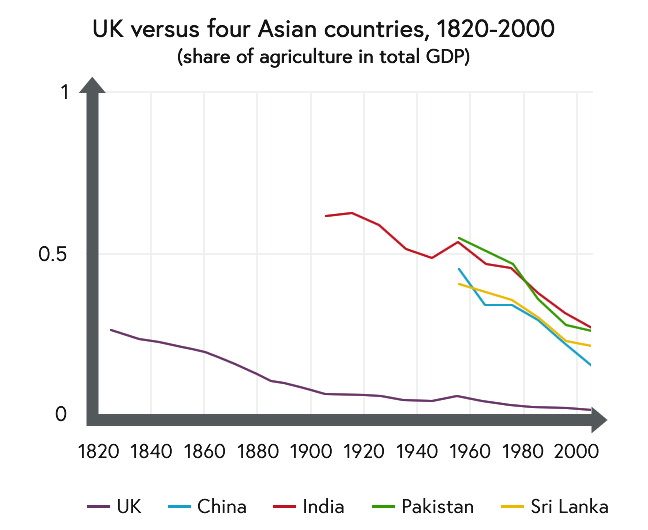