Yossi Elran tells us about one of the first recreational mathematicians, Charles Dodgson, better known as Lewis Carroll 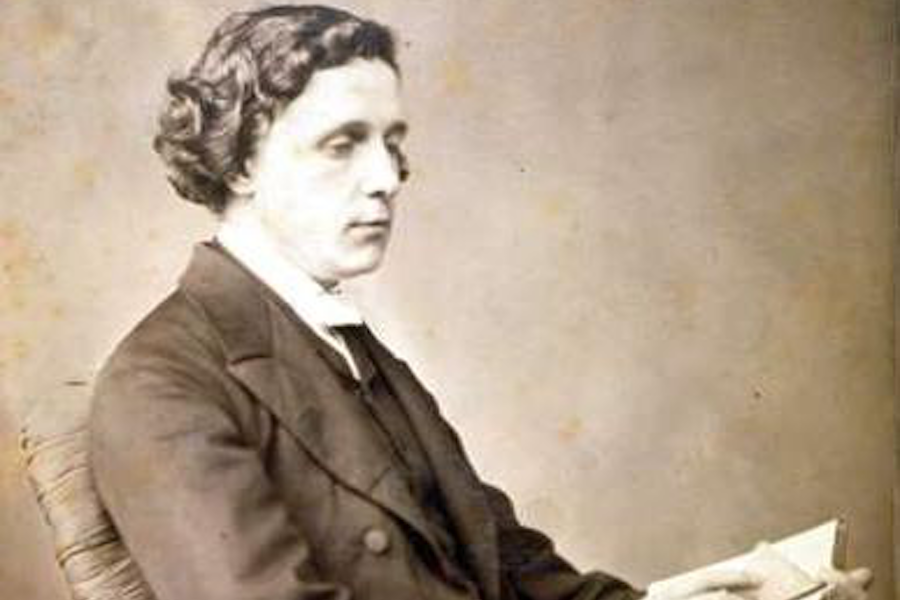 Recreational math has been around ever since math has, and it is usually beneficial, when learning a new subject, to give some historical background which is what we’ll do in the upcoming steps.

We perhaps should have begun this activity with some ancient Greek mathematicians, such as Diophantus of Alexandria, who lived during the second century AD and even wrote his epitaph as a math puzzle! Or Metrodorus, a fifth century Greek mathematician and grammarian who collected math puzzles. However, we chose the nineteenth century as our starting point, because this is really where recreational math became popular, even outside the math community. In Victorian England parlour parties especially, mathematical puzzles, games and recreations were regularly played.

‘Sometimes I’ve believed as many as six impossible things before breakfast.’ (from Alice in Wonderland)

Lewis Carroll was the pen name of Charles Lutwidge Dodgson. He was born in a small town in England in 1832, and died in 1898. It is simply impossible to summarise his biography and contribution to recreational math in a short article and we refer you to the links below for those of you who want to learn more about him. He is, of course, well-known first and foremost for his books ‘Alice in Wonderland’ and ‘Through the Looking Glass’, though her wrote many others, such as ‘Jabberwocky’, ‘the Hunting of the Snark’ and ‘Silvia and Bruno’. His books have been translated to many different languages, and are read all over the world by children and adults alike. Carroll wrote over 300 publications, many of them collected in a recent 5 volume compilation titled ‘the Pamphlets of Lewis Carroll’.

Lewis Carroll was the third of twelve children. His father was mathematically gifted, but chose a clerical position as the Archdeacon of Richmond. His mother was his father’s first cousin Frances Jane Lutwidge. Carroll studied as a child at home, becoming well-versed in English literature. As a child, he wrote many poems and short stories, which he illustrated himself. As the age of twelve he started his formal schooling at Richmond Grammar School, and after that he learn at Rugby School. He was accepted to Christ Church College at the University of Oxford graduating with first-class honours in 1854. In 1855 he got a Mathematical Lectureship at the University where he stayed in various positions until his death.

Of the many milestones in his life, we should perhaps single out the year 1856. It was during this year that he first published his first poem under the pseudonym Lewis Carroll. Coincidentally, during this year, a new Dean, Henry Liddell arrived at Christ Church along with his family. Carroll became very friendly with the family, in particular with Liddell’s three daughters, among them the famed ‘Alice’. On July 4th 1862, during a rowing trip with Alice and her sisters, Carroll invented ‘Alice in Wonderland’, and two years later published the story as a book.

Carroll was known to be very entertaining at the many parlour parties of his day, due to his mathematical and literal talents and because he was also a magician. He was very witty, had a great memory and loved games and puzzles, especially card games and chess. One of his favourite pastimes was to change the rules of games to see what happens. It is no surprise then, that Alice in Wonderland has playing cards as the main theme and Through the Looking Glass is really a game of chess.

‘What a funny watch!’ she remarked. ‘It tells the day of the month, and doesn’t tell what o’clock it is!’ (from Alice in Wonderland)

There are many sources where we can find some of Carroll’s recreational math games and puzzles. In the ‘Alice’ books themselves, Carroll included many logic puzzles as well as some letter and number games. Martin Gardner, a pioneer recreational mathematician in his own right, extracted and published many of these in his seminal Annotated Alice in Wonderland.

A frequently quoted source of puzzles is Carrolls collection of 72 ‘Pillow Problems’. These problems are math problems that he made up and then solved while lying in bed, hoping that this would help take his mind off his nightmares and frequent insomnia.

Lewis Carroll loved ‘playing around’ with dates. Among his many inventions, Carroll thought up a method to find out on which day of the week a certain date falls. His method was not based on any ‘previous knowledge’ and did not involve counting.

We cannot conclude this article without a word on logic. The Alice books teem with logical, or should we say illogical nonsense and word play, but Carroll went much deeper in the study of logic. His ‘Game of Logic’ was originally invented by Carroll as a pure game, but later on, became a very useful way to come to conclusions from any number of given words, sentences or statements.

Another word game Lewis Carroll invented is known as ‘Doublets’. Given an initial word, you have to evolve it into a given, ‘end’ word in the least possible number of steps. There is just one rule to follow. All you have to do at each step is to replace one of the letters of the word with a different letter to obtain a new legal English word. The following example will make this clear. In this example, we will try to get from the word FOUR to FIVE in eight steps.

What is your favourite Lewis Carroll quote?