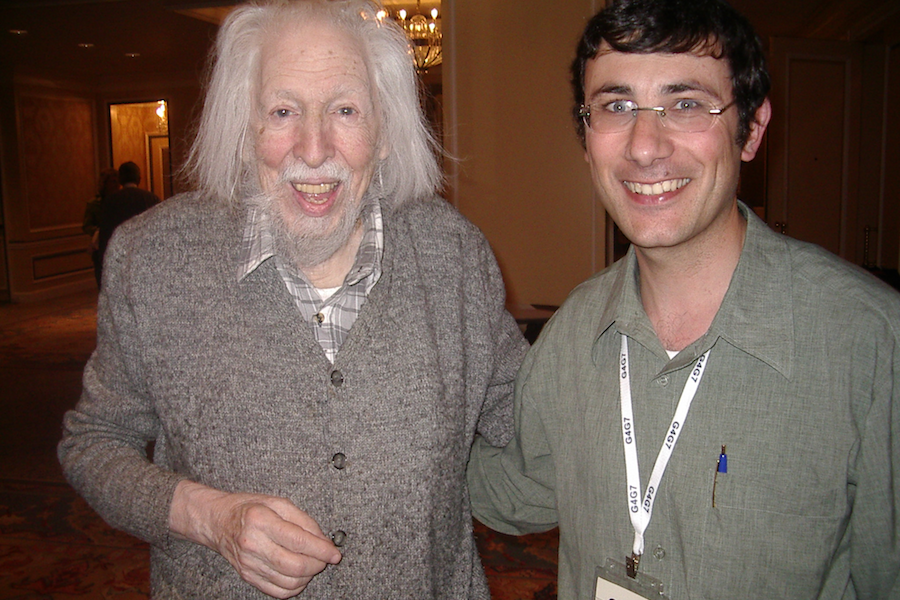 Raymond Smullyan, one of the worlds important logicians and also a formidable recreational mathematician, magician and pianist was born in New York 1919. In fact, he started out as a professional magician, performing all over the United States, and only later on in his life did he study math at Princeton University.

Smullyan has written excellent books on logic puzzles, through which he managed to teach some of his important math discoveries (especially in what’s known as Gödelian logic) in a way almost anyone can understand. Some of his famous books are: “What is the Name of this Book?” and “The Lady or the Tiger?”

The photo above was taken when I met him a few years ago at a conference on math and magic in Atlanta. Above all, Raymonds Smullyan was a very kind person, constantly smiling, with a riddle ready for whoever he meets. Maybe that is the reason that the chairman introduced him as: “Raymond Smullyan who will prove that either he doesn’t exist or you don’t exist, but you will never know which!”

Answering logic puzzles can be quite puzzling. A good trick is to realise that there are some statements that a liar cannot possible make, for example, “I am a liar”. These are the sort of statements that we look for, so that we can distinguish between liars and truth tellers.

In “The Lady or the Tiger”, Smullyan describes another imaginary world – an island called “The Isle of Dreams”, whose residents are always awake during the day, and always sleep at night. When they sleep, they dream dreams that seem very realistic, and are a continuation of whatever happened during the day. When they wake up, their real lives seem to be a continuation of their dream life, so that sometimes they don’t know if they are asleep or awake!

In Smullyan’s world, the residents of the island are of two types:

Here are four statements. Can you say which of them, if any, are true statements? Can you correct those that are not true? As usual, post your ideas in the comments below!