This short article introduces the setting of the UN Fourth World Conference on Women Beijing and the NGO Forum that was organized alongside it. 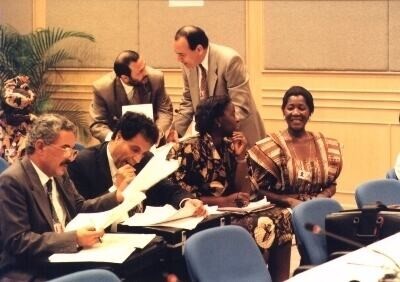 As you have noted in the previous step, the Beijing Conference was introduced as ‘a very polarizing conference’, by an unknown American-English speaking male voice comments in the first minute of the documentary ‘Makers: Once and for all’. You have noted down your ideas of why it was seen as polarizing, perhaps referring to the commentators statement that ‘it’s got feminists, pro-abortionists, all kinds of radicals’. How can we understand what was both novel and polarizing in this conference?

First of all, the Beijing Conference was organized in the 1990s spirit of optimism and hope. In the post Cold War era, a political space emerged where women across the globe could talk about the problems they experienced in their public and personal lives.

More importantly, women across the globe organized themselves to be able to take a seat at the table of the UN conference on Women in Beijing in 1995 to talk about the solution strategies they themselves proposed for realizing more equality and wellbeing. The UN Conference of Women in Beijing succeeded in claiming women’s rights as human rights and stimulated wide international exchange around the issue of women’s rights (Abu Lughod 2013).

An example of this that you will see in the following clips of the documentary, starting with Hillary Clinton’s speech in the next step. Another example that will become visible in subsequent steps are the women participating in the NGO Forum that was organized alongside of the UN Conference in Beijing. The NGO Forum brought together women active in civil society organizations and women’s movements from across the globe. While observing the official conference, the NGO Forum had an independent programme in which women discussed and organized around matters of women’s empowerment.

However, while the UN Conference is generally seen as the first of its kind to actively include the voices of women themselves, the extend to which the voices of women were actually heard and included is also questioned. In the following video and article steps we will unpack how the UN Conference revealed power dynamics around gender and women’s rights that fueled polarization around these issues.