This article explains what computational science is and how it relates to other fields. 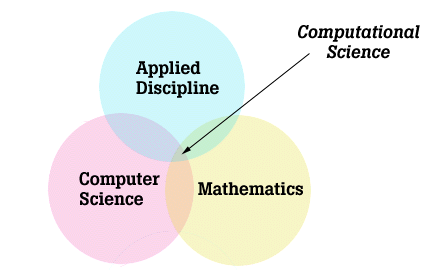 Computational science is a rapidly growing interdisciplinary field. There are many problems in science and technology that cannot be sufficiently studied experimentally or theoretically. It may be too expensive or too dangerous, or simply impossible due to the space and timescales involved.

In fact, computational science is considered by many to be a third methodology in scientific research, along with theory and experiment, and working in tandem with them. Computational science can be used to corroborate theories that cannot be confirmed or denied experimentally, for example theories relating to the creation of the universe. On the other hand, advances in experimental techniques and the resulting data explosion, allow for data-driven modelling and simulation.

Clearly, computational science is an intersection between mathematics, applied disciplines and computer science.

However, more recently, other disciplines, such as medicine (e.g. medical imaging, blood flow simulations, bone structure simulations), biology (e.g. ecosystem and environmental modelling) and economics became part of computational science as well. It is quite common nowadays to come across terms like computational economics or computational biology.

If you want to know what sorts of applications are run on the UK’s national supercomputer ARCHER, visit the relevant page on the ARCHER website. Is there anything that surprises you there?