Learn about when the construction industry gets it right - enshrining social sustainability into construction strategies and policies. 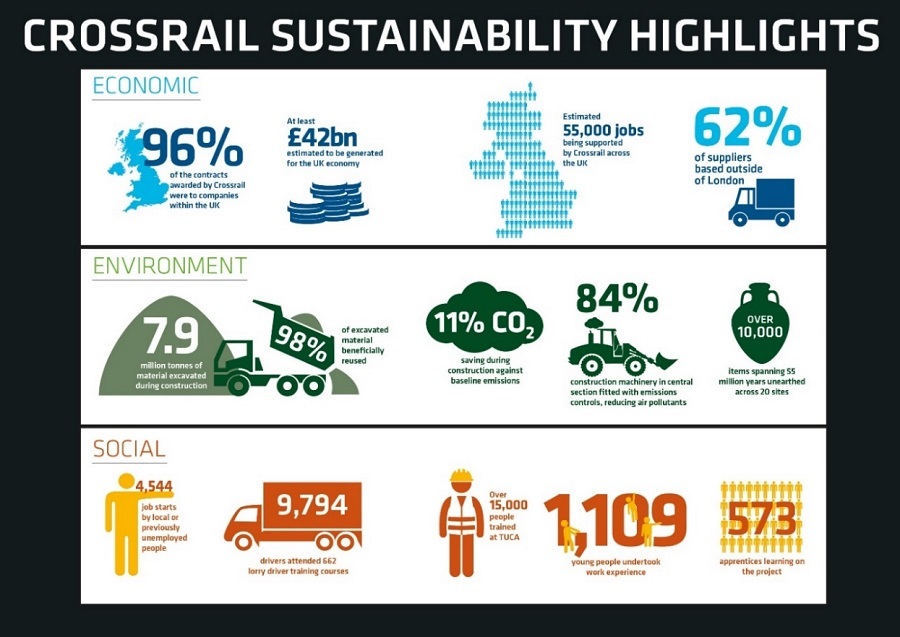 Where the construction industry gets it right, that is, when it enshrines social sustainability into construction strategies and policies, the outcomes have been very positive and are often embedded in economic and environmental sustainability activity. To help illustrate this point, and add further detail to the last step, it is worth revisiting the Crossrail project which we have mentioned before. It is an example where a holistic approach to sustainability was embedded in at the onset of project developments and covered the entire projects’ lifecycle.

As the Crossrail 2016 sustainability report demonstrates, a conscious policy was adopted to eliminate, where possible, pollution from all machinery used on site. This meant that 84% percent of all machines had to be fitted with pollutant reducing emission controls, and contributed to the 11% savings during construction against baseline emissions. Similarly, 98% of the 7.9 million tonnes of excavated materials were beneficially reused rather than being placed in landfills. Reuse also decreased the need for new materials of equivalent quantity to be sourced. In addition, given the number of journeys that would have been made to landfills, as well as delivering new materials to site for filling, there were significant reductions in the energy used and carbon emissions produced.

With regards to economic sustainability, it is interesting to see how this was used to effect local and national economic development. In order to ensure maximum economic benefits to local communities, a decision was adopted that saw 96% of contracts awarded to UK contractors, and for a wider regional impact, 62 percent of suppliers were based outside of London. As this second point involves not engaging local businesses, and having to transport goods into London, one might be tempted to question sustainability attributes of this action. However, the environmental impact of setting these businesses up in London would have been greater. Regarding goods delivery, a sustainable transportation strategy was in place, therefore the environmental impact of delivering goods to sites was effectively managed.

Many of these firms would have been established on the back of this project, and these firms would have been mentored and their capacity enhanced as the project unfolded rather than patronise established firms who may be international. As you can see, the key to the success of this project was having sustainability mainstreamed into construction strategies, policies, and management at the conception stage of projects, it was not an afterthought.

Regarding specific social sustainability practice, the Crossrail project delivered 573 apprenticeships, and of these, 27% were female, which goes some way in bridging the huge gender gap in the construction industry. This would not have been possible if it was not a deliberate policy to have a certain percentage of jobs set aside for women, and this policy was worked on assiduously to realise. Additional to the 4,544 local employments created, over 15,000 people were trained either on the job, or at specially created off-site training facilities. Whether trained on the job or at a facility, the health and safety of workers has also been a priority. Using a target zero approach, the project has made it a core theme to ensure everyone, from desk workers to site workers, works in a safe environment and goes home without harm. Clearly evident from this success story is the holistic approach adopted for delivering the Crossrail project.

For those interested in a further example, it is also worth revisiting the work of the 2012 London Olympics. We discussed this in an earlier week, but it also has excellent holistic approach credentials.

Are you now beginning to appreciate the benefits of a holistic approach and its need?