The seafood value chain is complex, transboundary, and relies on a wide variety of stakeholders to provide the seafood choices we see on supermarket. 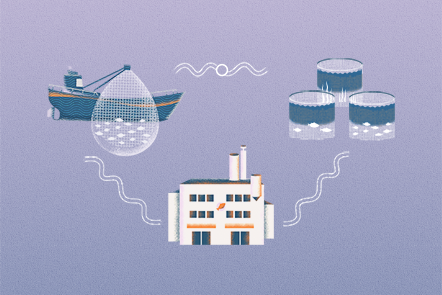 As we’ve explored in the previous step, the seafood value chain is complex, transboundary, and relies on a wide variety of stakeholders to provide the seafood choices we see on supermarket shelves.

While the list of stakeholders involved is far more extensive than the groups explored below, the following broad stakeholder groups form the foundation for catching, processing and regulating much of our seafood today.

While there’s no clear definition around what constitutes an industrial or large-scale fishing operation, they are generally characterised by larger vessels that travel further out to sea for longer periods with higher levels of technology on board, and have catch-equipment that allows larger single-hauls. Some industrial ‘super-trawlers’ are over 100m in length and can catch hundreds of tonnes of fish each day in nets that span more than a kilometre.[1]

Small-scale marine fishing fleets typically include Indigenous, artisanal, subsistence, and small-scale commercial and non-commercial fisheries that consist of smaller vessels with less technology. Despite these fisheries often being limited to the inshore areas close to their home ports, small-scale fisheries still play an integral role in our global seafood industry.

In fact, around half of the world’s fish catch is being produced by small-scale fisheries, with around 90-95% of that catch being consumed locally.[2]

Small scale-fisheries also employ around 10 times as many fishers than large-scale industrial fisheries, with many more relying on these local fisheries for their livelihoods.

Aquaculture has a wide range of stakeholders, such as feed providers, farm technicians, scientists, farm managers and seafood processors. In lower socio-economic regions or areas far from the coast, simple low-cost land-based farms that focus on robust and cheap species are often locally owned, managed and may only involve one or a few workers to maintain operations.

These local farms will often focus on subsistence and feeding local populations to provide food security. For wealthier nations or coastal regions with access to marine growing environments, higher value species like salmon, trout, and kingfish can be grown and exported by commercial type farms. These farms will typically provide products for international markets.

In order to make sure the seafood on our plates is as sustainable as possible, many fisheries around the world are governed and regulated by a central authority on fisheries. Though this will vary between countries, and even states within certain countries, many commercial and even small-scale fisheries operate under guidelines provided by legally binding policies.

As explained later in this course under step 2.4, where you will learn in finer detail about how quotas are set and who decides them, fish are a shared resource and each species must be fished at a sustainable level in order to avoid ecological flow-on effects for larger marine ecosystems.

In wealthier states with more resources, policies around yearly fish catch allowances will be decided (generally based on advice from fisheries scientists) and regulated by authorities and fisheries departments. These authorities can audit fishers or companies to ensure that boats are using the correct gear, that they haven’t caught illegal species, and that they have fished within their set catch limits.

Unfortunately, many regions do not have a large budget for fisheries authorities, making the enforcement of fishing policies much more difficult. In this instance, many small-scale and local fisheries will be guided by local authorities who also have a vested interest in maintaining their shared coastal spaces and resources.

The increasing influence of Non-governmental organisations (NGOs) and environmental associations in the seafood industry makes them a key player in setting standards around sustainable fisheries. NGOs can impact policy, practice and our consumption through a number of avenues, though they largely target the consumers directly.

By informing consumers around sustainability issues within the industry through targeted awareness campaigns, product guides, and even creating sustainability labels or certifications, NGOs can sway the market directly by impacting our consumer choices.

In the past, this consumer-first communication approach that favours an environment-first perspective, has led to conflicts of interest between NGOs and the fishers themselves as it often vilified those involved in the industry without relevant context. More recently however, many NGOs and environmental associations have become more horizontally involved with their approach, speaking directly to fishers and even policy makers within the industry to avoid vilifying fishers while also pursuing more sustainable fisheries goals.

As consumers, we all have an important part to play in the sustainability of our seafood industry. While a single choice may not feel like it has a large impact on the overall industry, our collective choices and voices do have the power to sway fisheries policy and even trends around the fish we see more readily in our supermarkets.

While there are many seafood species and products that are more environmentally sustainable to source, these options will never reach supermarkets without a significant market of buyers willing to consume them. For example, sourcing and producing shellfish, seaweeds and smaller fish species like anchovies and sardines are generally less impactful on the environment than larger and more vulnerable species, like tuna, salmon or cod. But while our taste preferences remain loyal to the handful of species you commonly see on the shelf, fishers are limited to provide what is demanded.

The same goes for the fishing practices we choose to support through our choices. For many of us, there are alternative options available to commercially sourced species or products that offer little to no transparency about how, where and when they were caught. Local fishing markets, direct trade options, or only selecting packaged seafood that offers a clear description of the product origin, all give us power to support those companies and fishers looking to improve their sustainability.