GSB command and control as a system

The Gold-Silver-Bronze command and control structure is analysed in the context of the Formal Systems Model.

The figure above shows the Gold-Silver-Bronze command and control (GSB C&C) represented from a systems perspective. The three levels of command are seen as individual subsystems, with attention focused on within subsystem activity. The essentially top-down relationship between the levels or subsystems are not apparent from this structure-only view of the system, but emerge when lines of influence are added, as shown below. 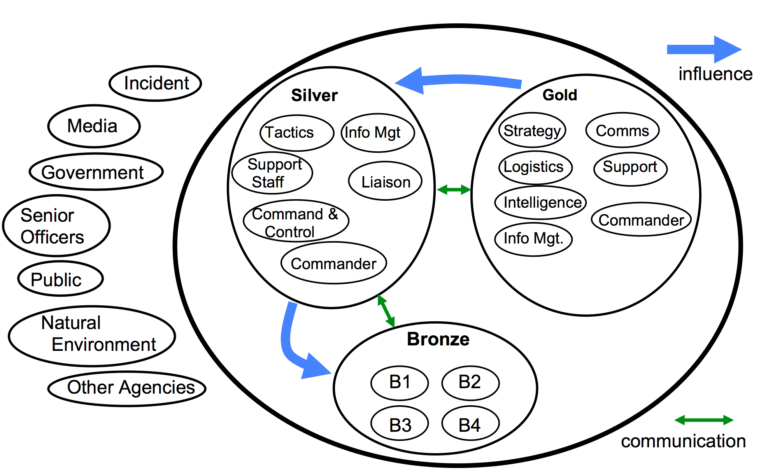 The absence of a direct line of influence between the Gold and Bronze subsystems is explained by Silver’s intermediary role. Silver provides Gold with feedback and intelligence about what is happening in the environment. It gathers some of this information itself, but the rest is sifted from the inputs it receives from Bronze via its links through the command and operational channels. Silver is thus both a conduit and a filter between Gold and Bronze.

Intra-sub-system communication is as important as inter-sub-systems communication. One of the drawbacks of the diagramming convention used here is that it is not capable of showing whether the communications channels are able to cope with the volume, frequency and immediacy of communication required. Answering that question requires a different form of modelling and drawing a sign graph can be a useful starting point for that.