The final section of the small part, the lectures you’ll hear in week 4 may be the most perplexing of the entire course. Some of you must feel puzzled 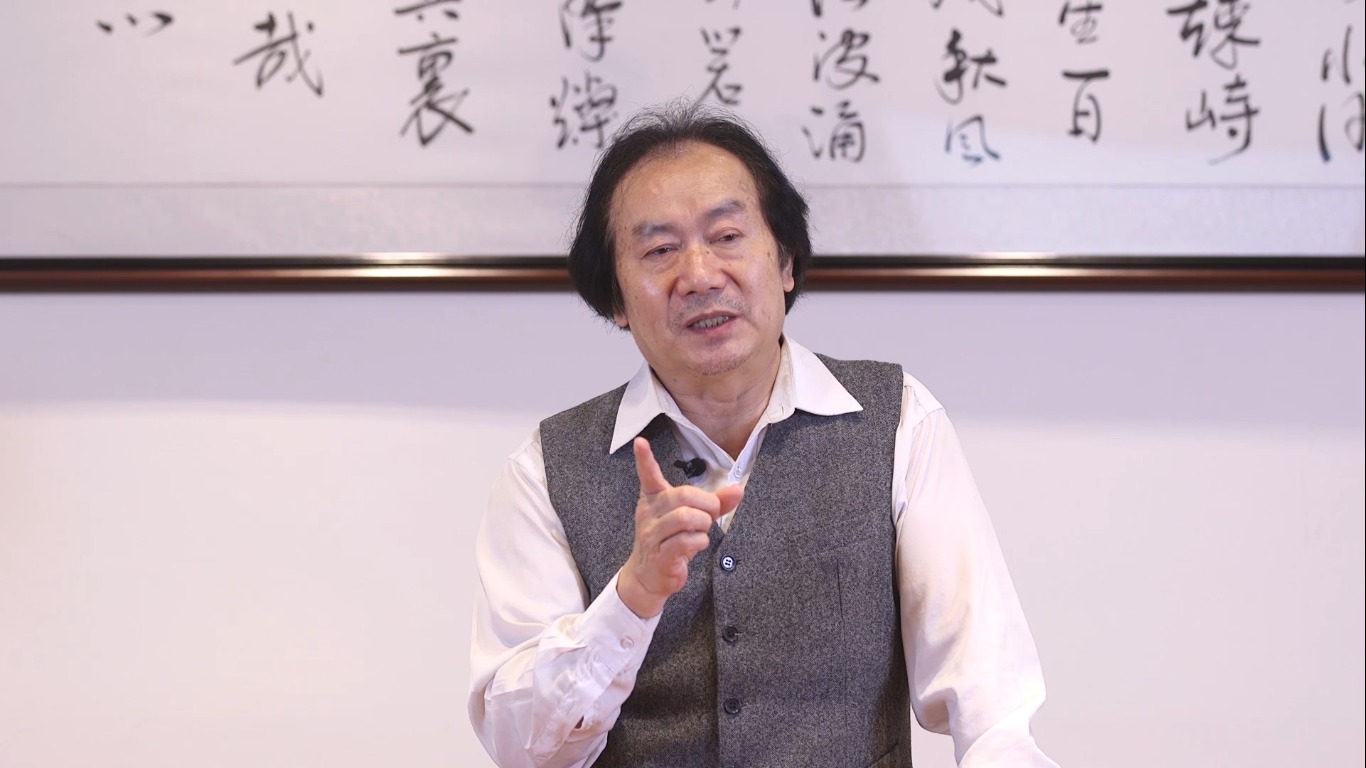 A short speech made before Prof. Roy’s lectures begins by GU Zhengkun

Before the course for the fourth week begins, I’d like to say something related to the following lectures. As you all know, Dao De Jing is a big topic which cannot be exhausted in a few lectures in such short period of time. I have organized a couple of Chinese scholars to make a systematic illustration of the masterpiece, which is called Daoism and Its Applications. The lectures you have been hearing here so far are just small part of the whole course series.

Now the final section of the small part, the lectures you’ll hear in the fourth week may be the most perplexing of the entire course. Some of you must feel puzzled: how can technoetic arts preached by Prof. Roy be associated with Taoism?

In order to dispel this perplexing puzzle above, I want to mention the following fact that the development of science in the west for recent one hundred years seems to have been echoing and verifying many of Taoist ideas. This is a major topic to discuss. I once said, in an article entitled Seven Laws Governing the Patterns of Development of Eastern and Western Cultures“，published in Sidney University Press that states the Sixth Law of Cultural Mutual Verification: The rationality of many aspects of a culture is often verified with the aid of borrowing many sides of its opposite culture. Lots of propositions raised in the eastern ancient culture have been finally proved or verified by western sciences.For instance, many concepts of Buddhism, the Book of Changes, and the Dao De Jing have been verified by modern sciences in the west, etc. In general, although both eastern and western cultures are characterized by rational and irrational elements, it is safe to say, the rational side of eastern culture is less apparent than that of the western culture; or in other words, without the development of modern science in the west, many profound ideas of ancient culture in the east can by no means be understood and confirmed. Similarly, without the wisdom and pioneering efforts of eastern ancients, the modern culture of the west will incur a danger of coming astray. Eastern culture is a mirror of western culture, or vice versa. To make myself understood, I’d like to offer a clumsy metaphor that eastern culture is a proposition as well as conclusion, while western culture arguments (evidences) and process of demonstration. It seems that the supreme truth of God can be obtained only in the perfect combination of east and western cultures.）

Well, maybe I should cite some examples to demonstrate how this statement of mine above is valid.

1．The idea of existence and nothing begetting each other.

Lao Zi says, “Existence and nothing beget each other.” (Chapter 2)

How can nothing produce something else? No. Nothing can beget only nothing. So what does Lao Zi really mean by Nothing? In fact, the Nothing here does not mean absolutely nothing. By nothing, Lao Zi refers to something invisible that our human senses cannot perceive; because we cannot see, hear, touch, smell it, so it is very hard to be named and is expediently called Nothing. Take Qi for example. It is something similar to energy that moves in our bodies and in the universe. Most people don’t feel it. But one who practices Qigong exercises can feel it. I’ve been practicing Qigong for more than 40 years. I assure you I can really feel it. The Qi is something substantial and material, but people’s senses usually cannot perceive it. In Chinese, the character Qi is often written as 炁，that is, 无（nothing）with four dots beneath, indicating it is something invisible, inaudible, odorless and untouchable, but it does exist. So it is Qi(炁). In fact, it is energy-like, field-like, with the power of gravity and repulsion. It functions everywhere throughout the whole universe. Ever since two thousand years ago, many Chinese scholars have asserted that there ia a field of Qi between the moon and the earth and that the tides of the sea is caused by the Qi(炁) from the moon. Now modern science has proved that the tides are really caused by the gravity of the moon. So the ancient Chinese Taoist scholars’ view of the cause of the sea tides is the same as that of contemporary scientists though they use different terms. According to the theory of Taoism, Qi (炁) can transform itself into all kinds of substances, something material-like. That is a sort of existence. This is what is called nothing begetting existence. Similarly, existence can also be transformed into nothing, something Qi炁-like. This is what Taoism means that existence and nothing begets each other.

2. Taoist alchemy paved the way for the western science of chemistry.

The Taoist alchemy originated from the idea of Taoist immortality or longevity. In a sense, the DDJ promoted the ancient Chinese chemical science. During the Eastern Han Dynasty, the Taoist alchemist Wei Boyang, wrote one of the world’s earliest monograph entitled “Zhou Yi Can Tong Qi” (A Chinese Treatise on Alchemy Based on Yi Jing Theory), in which Mr. Wei recorded the knowledge of chemical compounds and decomposition of lead, mercury and sulfur. During the Jin Dynasty, the Taoist Ge Hong edited another monograph of alchemy entitled “Bao Pu Zi” (Longevity by Embracing Simplicity). Needless to say, the development of western chemistry in modern times has become far more brilliant, but the efforts of the Chinese Taoist chemists above surely have paved the way in one way or another for the future development of Western science of chemestry.

In October 2015, Tu Youyou, the Chinese scietist won the Nobel prize in physiology and medicine. Her success was largely due to the work of Ge Hong Hong (284～364 ), a Taoist scholar in Eastern Jin Dynasty. In Mr. Ge’s book there is a prescription treating malaria with artemisinin. In order to find an effective way for the treatment of malaria, the global medical scientists made great efforts; about 200,000 kinds of Chinese and Western prescriptions were invented yet none of them could solve the problem. But Tu Youyou who worked at the Institute of Chinese Herbal Medicine Research discovered Ge Hong Artemisia Annua prescription by accident. To her great surprise, Ge Hong’s prescription was proved to have a 100% treatment effect. Mrs. Tu extracted the artemisinin from Artemisia mentioned in the Ge Hong’s prescription by using modern chemical method, and she created an effective therapy (ACT). According to the World Health Organization’s “World Malaria Report” in 2015, due to the use of Tu Youyou’s therapy, during 2000-2015, at least 5,900,000 thousand children’s lives were saved. Tu Youyou thus won the nobel prize. She surely deserves the honor, but we also need to remember, behind this prize winner, in fact, standing another great Taoist scientist Ge Hong. Strictly speaking, Ge Hong should also share the honor as one of the winners of the Nobel prize.

4． The idea of man and nature of similar essence and characteristics.

Taoism believes that there is a certain isomorphic relationship between nature and human beings. Man imitates the earth, the earth imitates heaven, heaven imitates Dao, Dao imitates nature. Nature is a macrocosm while the human body is a microcosm. The body in one way or another reflects the characteristics of the universe itself. The universe is the infinite expansion of the characteristics of the human existence. Therefore, Taoist disciples try to use their brains to communicate with the universe through quiet meditation. Taoism maintains that we can know the basic structure or information of macrocosmic phenomenon by observing the basic structure or information of microcosmic phenomenon. This seems to be consistent with the contemporary holographic theory of the West, that is, each small part of the universe contains the structure and information of the whole universe.

5． The universal relations between all things with regard to idea and consciousness.

Because of the above reasons, a Taoist believes that man and the world are of one unity, and everything affects everything else, thus there is a universal connection between them. This connection has something to do with the consciousness of the human brain. a Taoist tries to build up a connection with the macro universe by controlling the movement of consciousness of brain, and thereby obtain energy from the universe, such as the Qi (炁). Once the connection is established, people’s lives can be greatly elongated, or even infinitely extended.

As a result, the training of controlling consciousness has become for a Taoist an extremely important means. How does consciousness work? A Taoist must exert all his efforts to be aware of , organize and control it.

The creation of an artist often has a special form of consciousness. Therefore consciousness and artistic creation are closely related.

It is just against this background that Prof. Roy’s technoetic art’ theory was born.

In the Taoist theory of nature, everything in the universe functions in accordance with the law of nature.

The Qi (炁) suffusing among the universe and though man also operates in accordance with the similar law of nature.

In other words, the complex consciousness system operating in the human brain is also operating in accordance with the similar law of nature.