Detection of resistance in vector-borne diseases

This article discusses the challenge of resistance in vector-borne diseases and how to detect resistances more easily
© London School of Hygiene and Tropical Medicine 2020
This step was written by Dr David Weetman, Senior Lecturer, Liverpool School of Tropical Medicine and Dr Michael Coleman, Senior Lecturer in Medical Entomology, Liverpool School of Tropical Medicine. Why do we need to monitor insecticide resistance? Insecticidal products are the mainstay of control programmes for most vector-borne diseases. Arthropods often develop resistance to insecticide active ingredients rapidly, and multiple resistance in which the same population is resistant to multiple insecticides is common 1. With resistance in target insects, comes suboptimal control, or even programmatic failure, examples of which are growing especially in malaria control 2. Insecticide Resistance Management (IRM) is a key to sustainable insecticide use 3. However, IRM options such as combination, rotation or mosaic application of insecticides are far more challenging in vector control programmes than in agriculture, primarily owing to a lack of safe and economical insecticides and logistical constrains in large-scale programmes 4. These limitations place particular emphasis on effective warning systems for oncoming insecticide resistance in vector control. Detection of insecticide resistance can occur at a country-wide scale via a strategically chosen set of sentinel sites yielding spatial and temporal data on variation, and/or more focally to investigate changes in susceptibility which may result from application of insecticidal control tools in trials or programmes. Such information is crucial to identify, as early as possible, when changes to a programme may be required to prevent escalation of resistance. How should we define the resistance we are aiming to detect? It is first important to identify what type or level of insecticide resistance is of primary concern in a monitoring scenario. There are two main contrasting definitions. The first is aimed at identification of resistance at an early stage and defines resistance as (i) an ability to tolerate doses of an insecticide that would kill the majority of individuals in a susceptible population of that species. The second is concerned with a more advanced stage in which resistance is likely to be well established and is defined as (ii) a heritable population characteristic that results in the repeated failure of an insecticide product to control as intended, when applied correctly 4. Ideally, with entirely effective insecticide resistance management, free of insecticide and economical limitations and logistical constraints, definition (ii) would become redundant, but at present typically both are important for vector resistance monitoring programmes. 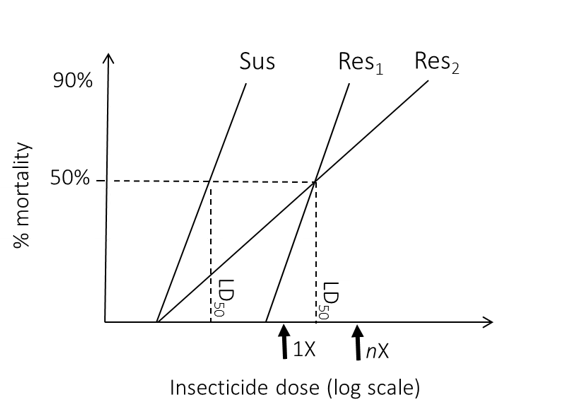 Figure 1: Hypothetical example of bioassay results from a dose-response experiment involving a susceptible (Sus) and two (Res) test populations. Both Res populations show resistance with much higher LD50 than the Sus strain, but Res 2 has a more mixed profile with some individuals highly resistant and others susceptible. This heterogeneity could be captured by application of both standard (1X) and higher level (nX) diagnostic dose bioassays.

View Course
What type of approach should be adopted to detect and quantify resistance? To identify resistance expressed at the phenotypic level, whereby vectors are able to survive specified insecticide doses or exhibit indicative variation between strains or populations, standard methodological approaches are applied. (a) Discriminating dose bioassays. This methodology is designed to measure the prevalence (i.e. frequency) of resistance in a vector population. Diagnostic doses for several insecticides, which are validated to reliably kill fully susceptible strains are available from WHO 5 and CDC 6 to identify resistant adult mosquitoes following exposure to a specified concentration of insecticide for a specified time. Where a threshold percentage of mosquitoes survive the diagnostic dose, the population is deemed to be resistant. Where possible vector species-specific diagnostic doses should be applied, but doses validated for Anopheles gambiae are often pragmatically applied to culicine mosquitoes 7, and also non-mosquito vectors such as phlebotomine sandflies, for which identification of an appropriate fully susceptible strain for calibration can be challenging. Clearly in such cases diagnoses of resistance or susceptibility must be interpreted with caution. (b) Dose-response bioassays. This methodology is appropriate to quantify the level and variability of response to insecticide exposure displayed by a population. The tested vectors are exposed to a range of insecticide concentrations for a fixed period of time (or less commonly a fixed dose for a range of exposure times). The combination of a specific concentration x time represents a measure of insecticide dose. From the regression line fitted to data the doses killing specified percentages of the test cohort (i.e. the doses lethal to a given percentage) can be estimated, most commonly at the 50% and 90 or 95% lethal doses (LD50, LD90, LD95). Differences in the slopes and intercepts of the regression line indicate variation in the population profiles for responses to insecticide (Figure 1). This can indicate variation in susceptibility among populations, although identification of resistance intensity per se requires comparison with a susceptible strain at a specific killing dose point (usually the LD50) to estimate a resistance ratio. (c) Stepwise assessment using multiple discriminating dose bioassays. Dose-response quantification can provide detailed information on resistance prevalence and level within and among populations. However, it is impractical when testing many populations and insecticides against adults because of the large number of test individuals required. Consequently, where diagnostic doses are available, a compromise strategy is now commonly adopted by monitoring teams, whereby if resistance is detected at the diagnostic dose (denoted 1X) progressively higher doses of the insecticide are tested until resistance is no longer detected (e.g. 2X, then 5X, then 10X). This can yield key parts of the information provided by dose-response assays (Figure 1) but using far fewer test individuals.