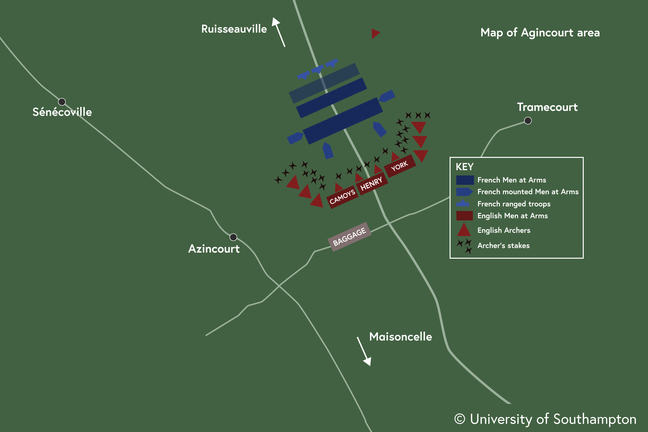 The location of the battlefield according to current understanding

Finding the site of the battlefield

In this article, Anne discusses the challenges which historians have faced in finding the actual site of the battlefield. Where was the battle fought?

Early texts on both sides of the Channel usually call the engagement of 25 October 1415, the ‘battle (or sometimes the field) of Agincourt’ although we also find a few other names applied such as ‘the battle of Ruisseauville’, the village to the north west of Azincourt, or ‘the campaign of Blangy’, the village to the south, at the place where Henry crossed the river Ternoise before leading his army onto the plain above.

Today, the site of the battle is believed to lie between the villages of Tramecourt to the east and Azincourt to the west, and Ruisseauville to the north and Maisoncelle to the south. In fifteenth-century English chronicles, however, Azincourt is the only place name given. The Burgundian chroniclers, Monstrelet, Waurin and Le Fèvre, writing in the 1440-50s, give more place names. On the eve of battle they place the English at Maisoncelle and the French at Ruisseauville. Waurin and Le Fèvre go on to say that the French drew up their troops between two small areas of woodland, one near Azincourt the other Tramecourt. Tramecourt is only mentioned in these texts but the French chronicler Fenin also places the battle between Azincourt and Tramecourt.

It is not possible from the chronicle evidence alone to pinpoint the site of the battle. Chronicles give very little topographical detail. But a number of texts suggest that the battle was fought between two areas of woodland.

The first maps of the battlefield

The first known map of the area (what is called the ‘Cassini’ map, after its creator, and part of a nation-wide mapping of France) dates to the second half of the eighteenth century. It does not mark the battle as being fought to the east of Azincourt, between Azincourt and Tramecourt, but instead places it (marked by crossed swords) to the west of the village of Azincourt. When Harris Nicolas had maps prepared for the second edition of his History of the Battle of Agincourt (1832) he also placed the battle to the west of Azincourt, presumably following the Cassini map.

In the second decade of the nineteenth century, however, we find evidence that some people considered that the battle had been fought between Azincourt and Tramecourt. In this they were following the accounts of the Burgundian chroniclers, which had been used by Tudor historians in England as well as historians in France.

In 1816, Waterloo medals were said to be presented on the plains of Agincourt. In 1818, Lieutenant Colonel John George Woodford drew up a ‘plan of the ground on which the battle of Agincourt was fought’ (British Library Additional Manuscript 16368 map C). This plan, drawn to scale with natural features of 1818 noted, places the armies between Azincourt and Tramecourt. Woodford also placed on the map where he believed the French had been buried (roughly where a monument depicting Christ on the cross, called the ‘Calvaire,’ was erected by the vicomte de Tramecourt in 1859. This can still be seen on the D104 road, just north of the road which runs between Azincourt and Tramecourt). Woodford carried out excavations where he allegedly found some bones, rings and other objects. Unfortunately the exact location of his excavations is not known, but it is assumed to be near to the Calvaire. 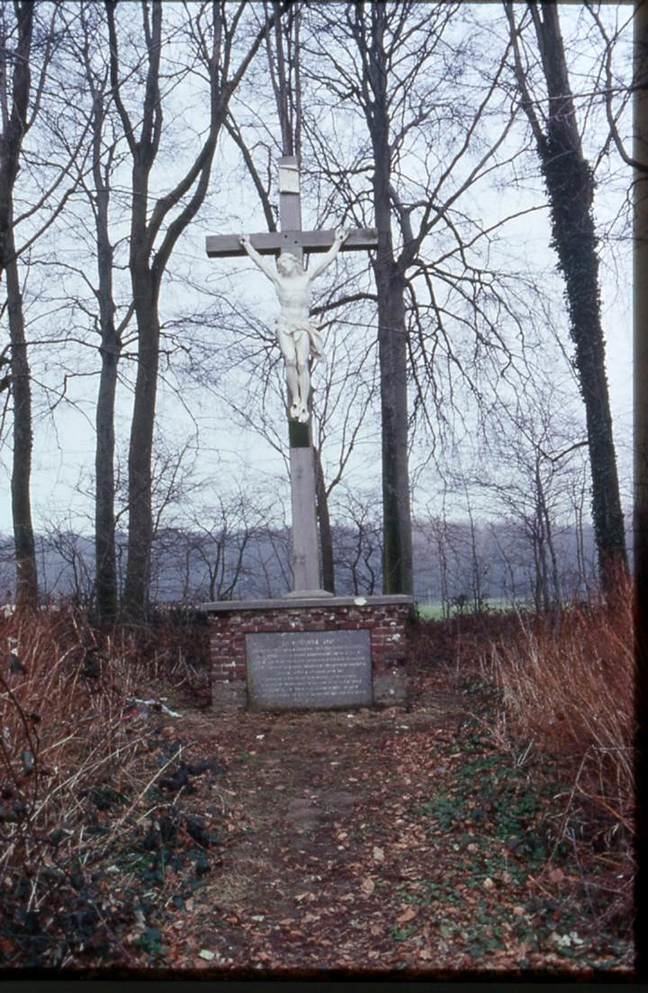 The Calvaire at Azincourt © University of Southampton

In 2002, the archaeologist Dr Tim Sutherland carried out metal detecting and field-walking of extensive areas between Azincourt and Tramecourt, on the traditionally-accepted site of the battlefield. No medieval finds were made, making Sutherland question whether this could really be the site of the battle. He wrote an article in 2005 that examined this problem in more detail, putting forward another possible location for the battle closer to Ruisseauville. In this he was following a sentence in the chronicle Gesta Henrici Quinti, written by an English priest on the campaign, which spoke of the French taking a position about a mile from the English and separated from the English by a valley. Just south of Ruisseauville, Sutherland found a valley which seemed to fit this description (see photo 1): closer to Azincourt the land was flat. 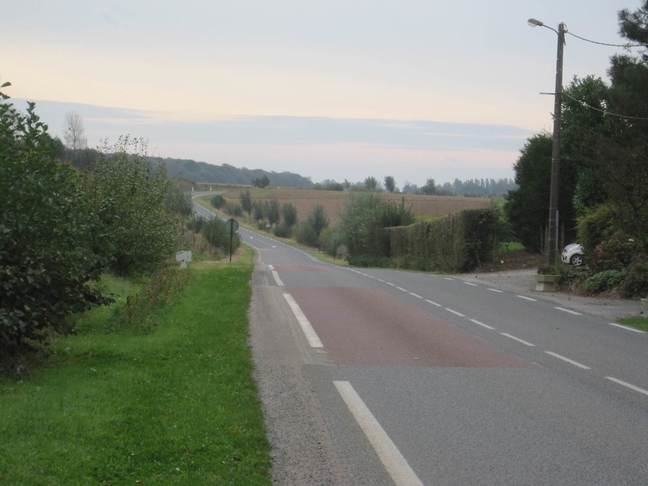 To date it has not been possible to carry out any archaeological study of Sutherland’s possible site. Another possibility is that the battle was fought closer to Maisoncelle. We know that Henry’s route from Blangy was to the west of the current D104. This would have brought him up to the plain of Agincourt in an area which is now called Monts just to the west of the village of Maisoncelle. This area may have been the position of the English camp. An old road leads from Monts to Azincourt. A valley, which today is called ‘le Morival’, lies just to the north of Maisoncelle and to the south-west of Azincourt. Sutherland postulates that this may have been the battle site: it fits the description of the valley noted in the Gesta (see photo 2) and it lies roughly where the Cassini map places the battle. 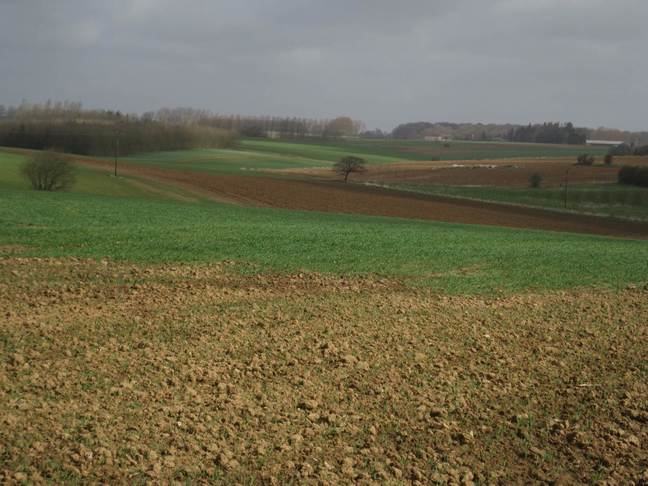 Photo 2: ‘Le Morival’ another possible site of the battle. © University of Southampton

Further archaeological work is needed to examine these possibilities. As Sutherland has concluded ‘there is currently still no recorded physical evidence of the battle ever having taken place!’.

How important is it that we find the actual site of the battlefield?

If we succeed in definitively establishing the actual site, what kinds of other information and artefacts might it give us about the battle?

Put your comments in the area below.