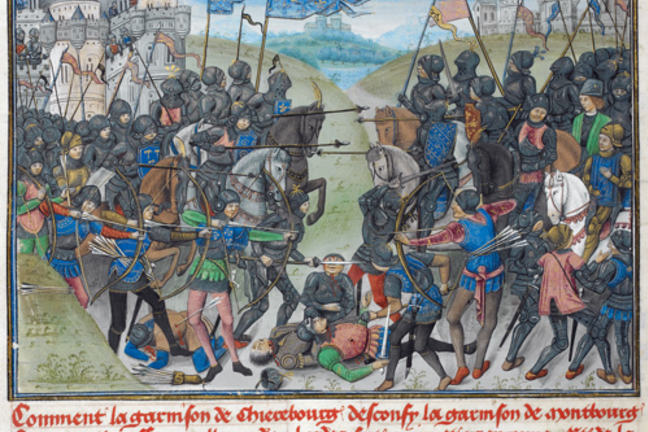 In this article, Dan describes the types of weaponry on the field of battle at Agincourt.

The battle of Agincourt is synonymous with the longbow which was used to great effect by the English army. A variety of weapons were used by both armies, however, including longbows, lances, swords and poleaxes. The former was the primary weapon of the English archers whereas the other melee weapons were mostly used by the men-at-arms.

Large quantities of lances would also have been used at Agincourt by men-at-arms. The small mounted French force at the battle tasked with driving off the English archers would have been equipped with this weapon. The vast majority of the French men-at-arms, and all of the English, were dismounted but still used lances at Agincourt. The English had an advantage over the French at the battle however, because the latter had decided to shorten their lances to give them greater control over their weapons prior to the battle. This proved to be a mistake during the melee as the longer English lances meant that they had a greater reach and were able to push over the French.

The other main weapons included swords and a variety of poleaxes. By the early fifteenth century the effectiveness of plate armour meant that swords designed for thrusting were preferred, whereas poleaxes were one handed weapons with axe or hammer points designed for crushing armoured opponents. Once the French men-at-arms had piled up, the English archers were able to enter melee, with weapons including daggers, axes, mallets and stakes. 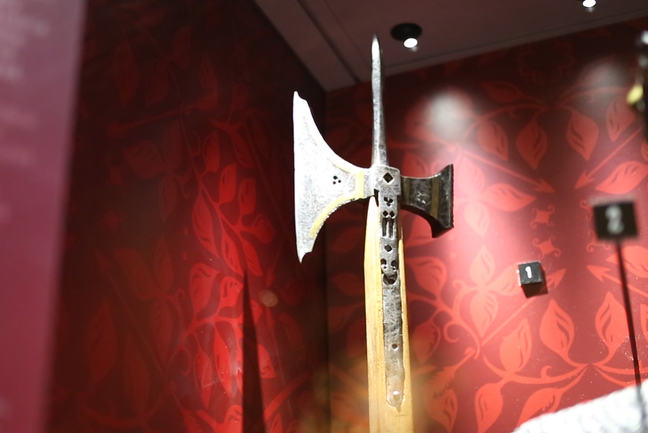 A poleaxe © University of Southampton. The poleaxe is owned by the Royal Armouries and was photographed with permission at the Tower of London

Individual soldiers were responsible for supplying their own weapons but we also find retinue leaders providing some equipment. The accounts of the receiver-general of John Mowbray, Earl Marshal, for instance, include the provision of 100 bundles of arrows in chests along with bowstrings. The English Crown also purchased and stockpiled sizeable quantities of weapons, most likely as repairs for damaged or lost equipment during the course of the campaign.

On 8 November 1413 a Hans Gobill was paid £52 in part payment of 1,200 bowstaves, with further quantities of bows and arrows acquired from the arsenal at the Tower of London, or constructed by bowyers and fletchers prior to the departure of the army for France. Although we do not know how many arrows the king provided in 1415, information survives for the purchase of arrows for Henry’s subsequent campaigns in France: as many as 150,000 were purchased in 1418 and 425,000 in 1421. Some provision was also made for the weaponry of the men-at-arms on 1 May 1415 with Nicholas Merbury, Master of the Ordnance, being paid £25 for the purchase of 1,000 lance shafts (i.e. without their iron ends).

When Henry V’s army departed in August 1415, between a quarter and a fifth of the soldiers were men-at-arms. These were the military elite of English society and were well equipped with armour to provide protection for hand-to-hand combat. By 1415, fully articulated suits of plate armour, known as ‘white armour’ (harnois blanc) were in use by the men-at-arms. This included the use of various items such as breastplates, gorgets, rerebraces and sallets to protect different parts of the body (see glossary below for explanation of terms).

Some idea of the equipment available to the royal household in 1415 can be seen from the financial accounts of Robert Rolleston, who was appointed keeper of the Great Wardrobe on 10 June 1418. His accounts also include those of a John Hill for 1416-1418, who was an official tasked with looking after the king’s armour. The equipment he was responsible for included 9 bascinets, 13 pairs of plates, 8 pairs of rerebraces with 1 pauldron, 5 pairs of pauldrons, 4 pairs of sabatons, 1 pair of schynbalds with 1 poleyn and 7 pairs of vambraces. This gives some indication of the armour available to the king and his household. This principally consisted of bascinets to protect the head, pairs of plates to protect the torso, rerebraces, pauldrons together with vambraces to protect the arms, as well as schynbalds and poleyns to protect the legs and sabatons to protect the feet. Men-at-arms would also require additional items, such padded jackets to wear under their armour, and mail aventails to protect the neck, which would be attached to bascinets. Archers had head protection but were not equipped with plate armour although hardened leather (cuir bouilli) and metal reinforced jaks (body protection) were worn.

Bascinet – a type of helmet

Pairs of plates – cloth armour with riveted plates inside

Sallet – a type of helmet

You can find a full glossary for the course in a later step.