This content is taken from the BSAC's online course, Antimicrobial Stewardship in Veterinary Practice. Join the course to learn more.
View course
2.14

0:07Skip to 0 minutes and 7 seconds Hello. I’m Richard Ryan. I’m a mixed-practise vet from Thomastown, County Kilkenny, in Ireland. I probably split my day about 80% large animals, of which 50% would be dairy animals, and the other 50% would probably be a mixture of beef or suckler animals and sheep. So I suppose as a practice, we’re trying to make small changes in our use of antibiotics. But in the hope that these small changes combined will add up to be a big change. So rather than going for one big change, and blanket banning certain antibiotics, our clients would just buy them elsewhere. We’re trying to educate our clients, work with them, treat them responsibly, show them that first-line needs to come first. Second line is for later.

0:52Skip to 0 minutes and 52 seconds You know, you always think if first-line fails, second-line works. They think, I want second-line as my first-line treatment. So they want to go straight for fluoroquinolones. You can see why they don’t want their animal to be the one case where it fails. We’re trying to get them to go back a step– first-line first. So to do this, we’re trying to improve our use of diagnostics. So mastitis is a huge area where we can do this– mastitis cultures. We need to educate clients more. Mastitis cases, a lot of them fail to respond to treatment. It’s very hard to clear up clinical mastitis. We’re getting them to take samples. Take milk samples before you treat.

1:30Skip to 1 minute and 30 seconds And then, if they don’t respond, send that milk sample away. They can have it frozen in the freezer. Send it away for culture. If she responds, great. Keep the sample. If you get six cases in a month, send the six samples away from the freezer, send them away for culture. Get an idea of the prevalent bugs on your farm. That way, then, you can you know what best first-line antibiotic to use on your farm. And also, we need to educate them. Not all respond. Respiratory disease– vaccination is key. We have some farms that have the same problems every year, year on year. Animals with respiratory disease.

2:03Skip to 2 minutes and 3 seconds Ended up treating two, then treat another two, another two, then blanket-treat the whole group. Vaccination, we have had one case where the guy went from treating his entire group every year, bought-in weanlings, to now treating two cases this year. The difference– vaccination on arrival. Huge difference. Vaccinated for respiratory viruses made a huge difference. He’s delighted. Instead of having to blanket-treat, and the expense, and the hassle. And also, the lost live weight and the welfare problem. In terms of other problems in respiratory disease– lung worm. Huge issue. That’s a huge issue in Ireland because of our grazing system. People are grazing lower down the sward. Now, there’s more lung worm larvae there. And also, they’re grazing– they’re rotating quicker.

2:46Skip to 2 minutes and 46 seconds This happens in dairy cows. But also, we had a case in yearling beef cattle. They had been treated with an ivermectin pour on two to three weeks previously. And then they continued to cough and cough and cough. The temptation would’ve been to say they’ve been treated for lung worm. Let’s give them antibiotics. Instead, we did bronchoalveolar lavages. We tried to do as many as possible. So we did six out of a group or 25 or 30 on this farm. And we found live lung worm larvae in three of the six. So this is great. This gives us proof. If we hadn’t found live lung worm larvae, we’d send the samples to the lab for cytology.

3:22Skip to 3 minutes and 22 seconds Try to find eosinophelia, eosinophils in the fluid, or to try and find lung worm eggs in the fluid. So it’s just a great example of where– then we were able to use an oral levamisole product. And the animals got better, instead of giving antibiotics. So we’re trying to encourage people to use diagnostics more and more, and vaccination more. We’re hoping that these small changes across the board will add up to a big change, rather than trying to just ban things, and then people going against you. We want to be ready for when these products are banned or heavily restricted. And we think they should be banned and restricted. But we want people to be ready for that, and educated.

4:01Skip to 4 minutes and 1 second So thank you for letting me be a part of this.

Making the most of diagnostics and vaccines

In this video, Richard Ryan emphasises the use of diagnostics for mastitis, vaccination for respiratory disease and bronchoalveolar lavage for lungworm to improve responsible antimicrobial use.

The use of diagnostics has a really important role to play in reducing antibiotic use. For example, the image below shows the findings of the brochoalveolar lavage from a lungworm case: 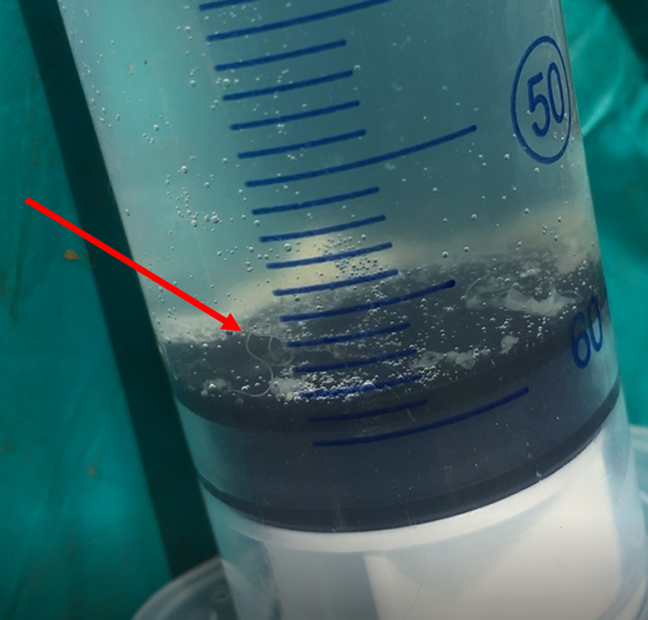 Live lungworm larvae were found in 3 out of 6 cows checked, so this provided evidence that an oral levamisole product could be used and the cattle improved. Without this use of diagnostics, antibiotics could have been used here irresponsibly.

Use the comments section to discuss how diagnostics and vaccination have helped in your practice. What other improvements can you think of for their use?