When analysing genome data, it can be very informative to investigate the differences between closely related organisms. Knowing these differences will help you to understand the biology of the organism you are studying

In the previous course Bacterial Genomes: Accessing and Analysing Microbial Genome Data you’ve learned about the genome browser Artemis and you should now be familiar with how to view genome data with Artemis and extract information.

ACT is a computer program that displays genomes and a comparison file in a user-friendly manner. It is essentially composed of three layers or windows. The top and bottom layers are mini Artemis windows (with their inherited functionality), showing the linear representations of the DNA sequences with their associated features such as genes. The middle window shows red and blue blocks, which span this middle layer and link conserved regions within the two sequences, in the forward and reverse orientation respectively. Consequently, if you were comparing two identical sequences in the same orientation you would see a solid red block extending over the length of the two sequences in this middle layer. If one of the sequences was reversed, and therefore present in the opposite orientation, there would be a blue hour glass shape linking the two sequences. Unique regions in either of the sequences, such as insertions or deletions, would show up as breaks (white spaces) between the solid red or blue blocks. 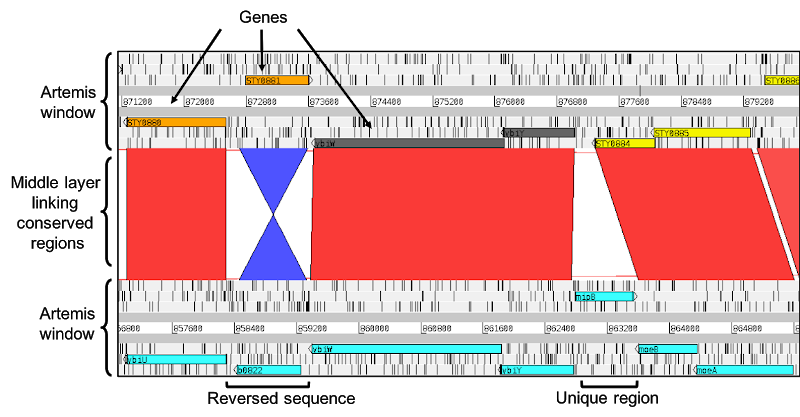 In order to use ACT to investigate your own sequences of interest you will have to generate your own pairwise comparison files. Data used to draw the red or blue blocks that link conserved regions is generated by running pairwise BLASTN or TBLASTX comparisons of the sequences. You will learn how to create your own comparison file in week 2 of this course.

Similar to Artemis, we will install ACT on our computers and run it locally. We will show you how to do this in the next step.