Where does palm oil come from?

The oil palm tree (Elaeis guineensis) is native to West Africa and there is evidence of its use as a staple food crop dating back 5,000 years. [IUCN] It was the Industrial Revolution in the late 18th and 19th centuries that led to the expansion of trade in palm oil which was used in candle-making and industrial lubricants. In the 20th century European companies began to invest in palm oil production as markets developed for its use in soaps, lubricants and edible oils. Nigeria, in West Africa, was the early leader in production, but it has been superseded by Southeast Asia.

The expansion of palm oil production started in the 1970s, when the process of fractionation was developed which broadened the range of things it could be used for. Then, with a phenomenal acceleration since the early 1990s, palm oil was turned almost overnight into a global commodity. This was largely due to the rise in demand for processed foods and increased consumerism, along with the growth of global supply chains. It was the Dutch consumer products giant, Unilever, that lead the charge, in around 1995, to replace the trans fats that were deemed to be less healthy than saturated fats (derived from butter) in all their products. Trans fat was created by the process of partial hydrogenation and the scientific and medical consensus was that these fats must be avoided. The manufacturers settled on palm oil as a viable alternative and the statistics bear this out: in 1980, the world produced 4.5 million tonnes of palm oil. In 2014, the world produced nearly 70 million tonnes, 15 times as much.[IUCN]

Whilst the first plantations in Malaysia were established in 1917, it was in the early 1960s that the Malaysian government began to focus on palm oil in an attempt to diversify away from its economic dependence on rubber and tin, both of which were suffering from falling international prices. The government sought to replace rubber with palm oil plantations, in the process making substantial investments in the sector, including in the technology to extract the oils from the palm fruit. (‘How the world got hooked on palm oil’) 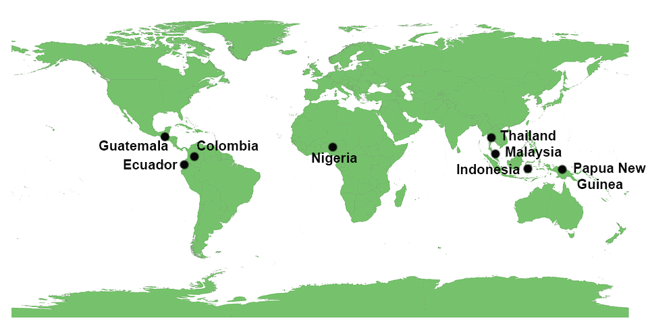 More recently, Indonesia has made similar, even more notable investments in extensive palm oil production and processing and since around 2006 has overtaken Malaysia as the world’s largest producer of palm oil (with around 33.5 million tonnes per annum in 2014). In 2014, production in Malaysia stood at 20.35 million tonnes per annum. Globally, Indonesia also has the largest hectarage under cultivation to palm oil. Together, these two countries now account for 85% of global palm oil production. Several other countries, including Thailand, Colombia, and Nigeria, as well as Guatemala, Ecuador, Papua New Guinea are significant contributors.

Brazil may become a major palm oil producer in the future. The area of land under palm oil production doubled between 2004 to 2010, but production to date is modest. Nearly 90% of the 236,000ha of oil palm plantations in Brazil are in Pará state, where the industry provides some 20,000 jobs. Brazilians claim that almost half the land surface of their vast country is well suited to the production of palm oil. The danger, environmentalists say, is that instead of converting their environmentally destructive and relatively low yielding cattle ranches and soya farming operations to more efficient palm oil farms, they will burn and cut down valuable rainforest to do so. This could also endanger the lives and livelihoods of significant numbers of indigenous and landless people who stand in their way.

Currently, Brazil is still a minor player in global palm oil production and remains a net importer of palm oil. However, if Brazil decides to invest in palm oil production more seriously in response to ever-expanding global demand, the environmental and social consequences on the Amazon rainforest could be dire. 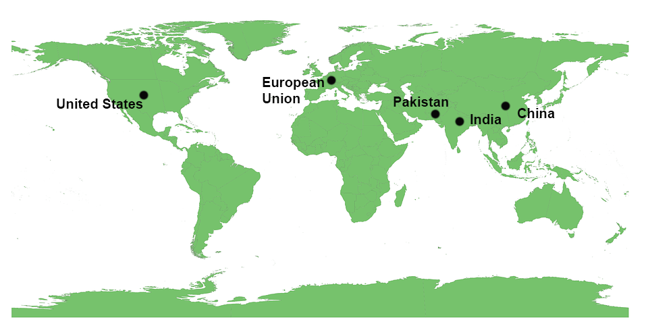 Indonesia is both a major exporter (ranked first) and a major consumer (ranked second) of palm oil in the world. In terms of imports (in millions of tonnes), India ranks first at 9.2, followed by the European Union (6.5), China (4.9), Pakistan (3), and the United States of America (1.4). [IUCN]