0:07Skip to 0 minutes and 7 seconds Which antibiotic would you use? In this case, Vincent has a ventilator associated pneumonia caused by a multi-drug resistant pseudomonas aeruginosa. The antibiogram shows multi-drug resistance to fluoroquinolones, such as levofloxacin and ciprofloxacin, which is not shown, is resistant to cephalosporins like cefepime, resistance to beta-lactams, like piperacillin-tazobactam. He’s resistant to aztreonam, meropenem, and it’s only susceptible to tobramycin and polymixins, like polycin or polymixin B . So what are our choices? The first choice that we would usually select to treat a pseudomonas pneumonia would be cefepime. However, in this case, this organism is resistant. Cefepime is an antibiotic that has a broad spectrum of antimicrobial therapy, including antipseudomonal activities. Unfortunately, not an option in Vincent’s case.

1:03Skip to 1 minute and 3 seconds The next drug that we would typically use would be piperacillin-tazobactam. It has a similar antimicrobial spectrum to cefepime, but it also is active against anaerobes and enterococcus. Therefore, it has a broader spectrum that we actually need in a ventilator associated pneumonia case. However, in this case, the organism is also resistant. Carbapenems, such as meropenem, are drugs with a very broad spectrum of activity, including also indisutomol activity. Unfortunately, in this case, the organism is also resistant to meropenem. Therefore, not an option.

1:44Skip to 1 minute and 44 seconds Colistin and polymixin. As part of the empirical treatment in severe infections in many countries, we have to select drugs that were repurposed, that were created many decades ago and then were stuck in a shelf, such as colistin and polymixin B. These drugs are reserved for the treatment of multi-drug resistant organisms, such as pseudomonas, acinetobacter, and sometimes enterobacteriaceae. Colistin acts more like a detergent to wash off the cell membrane of the organisms. And most of the time, we recommend using it in combination with another agent to avoid the development of resistance.

2:23Skip to 2 minutes and 23 seconds The dosing of colistin in critically ill patients is a loading dose of 9 million units followed by a maintenance dose of 4.5 MUs twice daily if the creatinine clearance is greater than 50. If the patient has renal insufficiency, the dose has to be adjusted based on the creatinine clearance. The loading dose is not always indicated in non-critically ill patients because there isn’t enough evidence. However, in clinical practise, we do recommend, both in critically ill and non-critically ill, to consider using a loading dose based on the kinetics of the drug. The next agent that we could consider in some countries is fosfomycin. With fosfomycin, there is limited experience for the treatment of severe infections caused by carbapenem-resistant organisms and carbapenem-resistant pseudomonas.

3:19Skip to 3 minutes and 19 seconds It has no activity against acinetobacter and its activity against pseudomonas is limited. Therefore, if you were to use this drug, it has to be used in combination with another effective agent and not as monotherapy. We recommend to consider using fosfomycin in patients with limited– very limited– or no therapeutic alternatives. And again, it should be used with one or two active agents. The dosing is 4 to 6 grams intravenously, four times a day, or 8 grams intravenously, three times daily. In some countries, this drug is yet only available as an oral option. You should never use it as monotherapy for complicated infections, such as pneumonia, and the oral formulation is approved to treat uncomplicated urinary tract infections.

4:12Skip to 4 minutes and 12 seconds Intravenous and oral formulations sometimes are used in serious cases with extreme drug-resistant organisms, like in this case as pneumonia, but also in osteomyelitis and bacteremia.

4:26Skip to 4 minutes and 26 seconds Selecting antimicrobials to treat severe infections caused by other carbapenem-resistant organisms. If you were to choose a drug, you really need to think of what is the MIC, or microbiological activity, the minimum inhibitory concentration, to kill this drug. What is the toxicity profile and what is the source of infection? And based on that, we recommend different priority scores, and you’d also need to consider the country where you live, where you practise, and the local antibiograms and susceptibilities in the population that you’re treating. Treating a patient in the United Kingdom might differ completely from treating a patient in Spain, in the United States, or in a Latin American country.

5:10Skip to 5 minutes and 10 seconds For example, on the left side of this column we have respiratory interabdominal urinary or catheter or primary bacteremias. And then, on your right hand side, we’re going to see the regimens based on your first through your fifth priority, according to their source of infection and the area where you practise. In the case of respiratory infections, we would like to recommend that if you’re dealing with a carbapenem-resistant organisms, you may want to choose a carbapenem in combination with another agent. In some countries, we already have the new cephalosporins with a carbapenem ace inhibitors. And those would be excellent choices in the patients that have multi-drug resistant organisms.

5:54Skip to 5 minutes and 54 seconds Unfortunately, not everywhere around the globe has the capacity to have access to these newer, highly effective, but very expensive agents. If you’re dealing with an interabdominal source, you may also want to consider, instead of a carbapenem– if you can use carbapenem-sparing agent– perhaps decacyclene in combination with another agent if necessary. If the source is urinary, aminoglycosides might be an effective option, always if the patient does not have renal insufficiency or contraindications to the use of aminoglycoside. Fosfomycin could be an effective option in the case of uncomplicated urinary tract infections to spare the use of carbapenem and to spare the use of aminoglycosides or colistin.

6:37Skip to 6 minutes and 37 seconds If you looked at the fifth column in this slide, tigecycline is reserved as your last resort antibiotic for the treatment of urinary or catheter-related bloodstream infection. The reason is that tigecycline has very poor concentration in urine and in blood or serum. Therefore, you should not use this agent as first-line therapy when dealing with primary bacteremias or urinary tract infections. Moving on to our next slide, there are some new antibiotics and antimicrobial combination therapies that are effective for the treatment of gram-negative bacterial infections. Some of the new antimicrobials include cephalosporins. We have ceftolozane and tazobactam. Ceftolozane looks like ceftazidime with a site chain. It has enhanced anti-pseudomonal activity and it’s eight times more potent and active than doripenem.

7:27Skip to 7 minutes and 27 seconds It has activity against extended spectrum beta-lactamases and AmpC beta-lactamases. Therefore, this is an excellent option for multi-drug resistant organisms. We recommend to prioritise the use of ceftolozane tazobactam for the use of pseudomonas resistant to carbapenem and leaving it as a second choice for the enterobacteriaceae. It’s important to remember that it has no activity against the Class B carbapenemases. Currently, in phase three and four trials, it’s superior to leave ofloxacin for complicated catheter-associated urinary tract infections and non-inferior to meropenem plus metronidazole for complicated interabdominal infections. Ceftolozane tazobactam has no anaerobic activity. Therefore, if you’re going to use this agent to treat anaerobes in combination with a carbapenem-resistant organisms, such as pseudomonas, remember to add anaerobic activity.

9:14Skip to 9 minutes and 14 seconds It is not active against the metallo-beta-lactamases, and it’s extremely important to remember that if you’re treating a new Delhi beta-lactamase and NDM, this drug will not be active by itself. The next agent that is coming up, but it’s not yet available, is ceftaroline plus avibactam. Ceftaroline is a drug that has a very potent spectrum of activities, such as ceftriaxone, but also has activity against MRSA. The combination with avibactam even provides further spectrum of activity against ESBLs, AmpC, KPCs, and maybe OXA-48s. It is not active against non-fermentors, such as pseudomonas and acinetobacter baumannii. Therefore, this drug will not be suitable for our patient Vincent. This drug is yet not available, and it’s in phase III clinical trials.

10:07Skip to 10 minutes and 7 seconds The last drug that we are going to talk about today is aztreonam plus avibactam. This drug will have activity against KPCs and some of the class D OXA-48s, but it’s hydrolyzed by the class A ESBLs and AmpC. It’s also in phase 2 and phase 3 clinical trials. It may have activity against pseudomonas. Back to the case. So the treatment options that we have in the case like Vincent are becoming a major challenge globally. Intravenous aminoglycoside or colistin, in combination with a beta-lactam antibiotic could be an option. And in this case, we would prefer to use the new beta-lactamase inhibitors.

10:49Skip to 10 minutes and 49 seconds The microbiology lab should test susceptibilities to ceftolozane-tazobactam as it could be the most effective option in combination with either the aminoglycoside or colistin or polymixin. If ceftolozane-tazobactam is not available, then we would recommend to use agents like fosfomycin or ceftazanine-avibactam, which could be combined and considered if susceptible, in combination, perhaps, with other agents, such as colistin or aminoglycosides. What if you don’t have any of these drugs available? Well then, you’re in trouble. So you may want to use colistin in combination with a carbapenem. And again, it would all depend of what is the minimum inhibitory concentration of the carbapenem.

11:31Skip to 11 minutes and 31 seconds If the MIC is less than 8, you can probably continue to use the carbapenem in combination with colistin or an aminoglycoside and try to overcome that resistance by doing extended or continued infusion of the carbapenem. If the carbapenem has MIC greater than 8, it is unlikely that you will be able to overcome that mechanism of resistant. Yet, it might be better than using colistin monotherapy.

Choosing an antibiotic for Vincent

In this video Dr Lilian Abbo discusses the antibiotic treatment options for Vincent.

Please note, the final slide of the video should read ceftazanine/avibactam, rather than cefepime/avibactam.

Please watch the video and then consider the duration of therapy for Vincent:

There are no standardised studies on the duration of treatment for VAP for carbapenem resistant pseudomonas, but clinically we extrapolate from studies with more susceptible bacteria.

An article by Chastre: 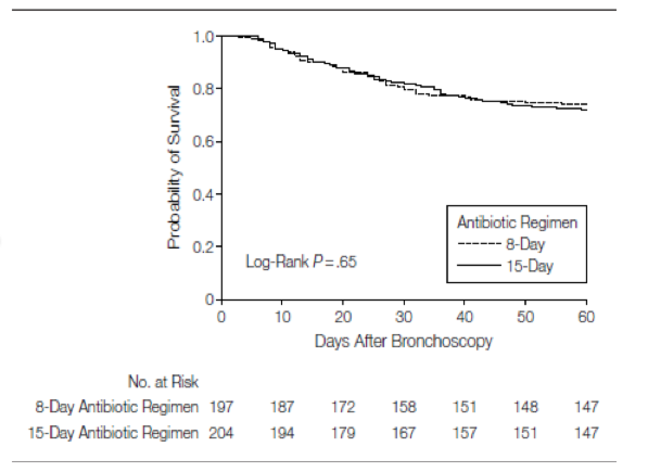 You may also like to read Brad Spellberg’s paper “The New Antibiotic Mantra: - “Shorter the better”, 2016 which discusses the evidence for the duration of antibiotic therapy.