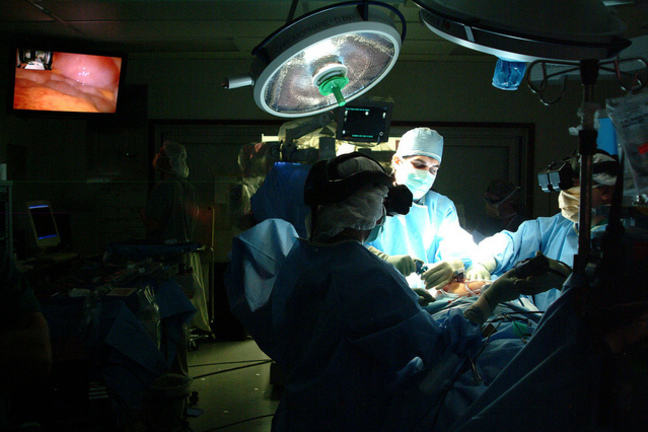 Operating theatre with operation in progress.

Vincent is a 68-year-old retired taxi driver. He has high blood pressure and diabetes mellitus, which are well controlled. He used to smoke.

A couple of months ago, he started to have progressive shortness of breath and was diagnosed with severe Aortic stenosis. Ten days ago he went for Aortic valve exchange. He received antibiotic prophylaxis with intravenous cefazolin during the first 24 hours.

During surgery, he became severely hypotensive due to massive bleeding, requiring more than ten red blood cell packs. The first postoperative day he spiked a fever up to 38.3 ºC. Blood cultures were drawn and he was started on intravenous ceftriaxone that was discontinued 5 days later. A chest x-ray was performed, showing no infiltrates.

Yesterday, Vincent, who couldn’t be weaned off the ventilator, started to have increased secretions that the nurse described as bad, odorous, thick and greenish. At the same time he needed higher oxygen concentration (FiO2) and volumes to reach target oxygen saturation in his blood.

Today he has spiked a fever up to 39ºC and his blood pressure has dropped significantly. His blood tests show significant increase in the white blood cell (WBC) count, whicc has risen up to 34,000 WBC/mm3. A chest x-ray has been performed:

Consider the following questions about this case:

Share your thoughts with your fellow learners in the comments.

Learn more about all things insulin: from how it works, to insulin types, to side effects and guidance on how to prescribe safely.