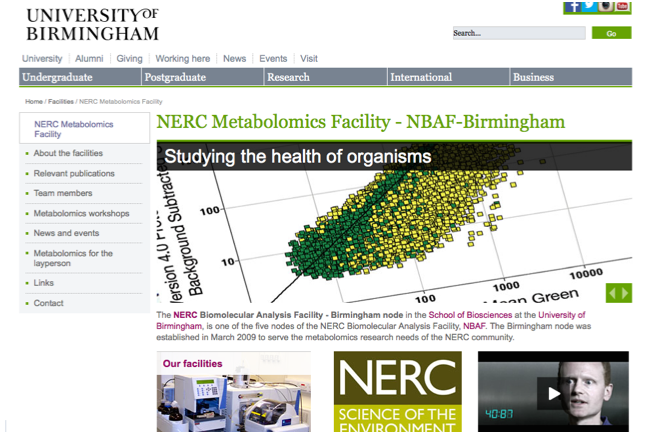 The website for the NERC metabolomics facility – NBAF Birmingham

NBAF-B, at the University of Birmingham, is one of the four ‘nodes’ of the NERC Biomolecular Analysis Facility (www.nbaf.nerc.ac.uk) and provides the UK environmental science community with access to state-of-the-art metabolomics facilities and expertise.

We use both NMR and mass spectrometry to identify the often subtle changes in plant, animal and/or microbial metabolomes that are indicative of the interactions of organism’s within their natural environments. This ‘discovery-driven’ research is for example used to generate novel hypotheses about biochemical stress-response mechanisms. We apply metabolomics to investigate effects that occur on acute timescales up to evolutionary time-scales, the latter enabling studies of genetic adaptation. In a typical experiment, a control group of organisms is compared to one or more groups experiencing environmental pressure. Metabolites of the whole or parts of the organism are extracted, and analyzed by NMR and / or mass spectrometry. These datasets are then compared using different statistical approaches to discover the significant molecular changes between groups.

We get involved in some very interesting projects studying unusual creatures! In 2012 we collaborated on a study of serum samples from whale sharks (Rhincodon typus), the world’s largest fish species. Samples from six captive whale sharks from the Georgia aquarium, US, were studied using NMR spectroscopy, and we determined that individual animals could be differentiated based on the metabolite compositions of their serum, and in addition that unhealthy individuals could be discriminated from the healthy whale sharks. The major metabolic difference between healthy and unhealthy individuals was the concentration of a metabolite called homarine, which was the first reported observation of this compound in an elasmobranch.

We have also used metabolomics to discover that metabolites associated with DNA methylation are altered in tumour formation in the livers of the marine flatfish, dab (Limanda limanda). Specifically, the 1-carbon cycle was discovered to be one of the top metabolic pathways to be altered in the liver cancer, which was hypothesised to be responsible for the alteration of DNA methylation, and consequently associated with the pathogenesis of the tumour.

More recently we collaborated on a study of ocean acidification, that is the lowering of the pH of seawater caused by rising carbon dioxide levels in the atmosphere, a phenomena which poses a significant threat to marine organisms and ecosystems. NMR spectroscopy was used to investigate the response of the blue mussel, Mytilus edulis, to reduced seawater pH and increased temperature. Analysis of the metabolome revealed significant differences between male and female organisms and different responses to environmental stress. This study has important implications for the interpretation of metabolomic data in mussels, as well as the impact of environmental stress in marine invertebrates in general.

The future impact of metabolomics on the environmental sciences

We strongly believe that metabolomics will play a major role in our understanding of the effects of global stressors on the biota on planet Earth. One of the challenges currently faced by environmental scientists is finding reliable measures to describe the influence of external pressures such as climate change and pollution on plants and animals in the wild. Traditional approaches, for example counting individuals in their natural habitat, are inadequate because they are incapable of detecting sublethal stresses – i.e. stresses that degrade the fitness of organisms without actually killing them. Furthermore, these traditional measures of ‘alive’ or ‘dead’ cannot provide any insight into the underlying causes of the stress.

Metabolomics promises a solution to this problem by producing detailed molecular insights into the biochemical processes occurring in stressed plants, animals and microbes, enabling us to understand more about how these organisms are responding to environmental stress as well as providing “biomarkers” to help monitor for stress in our natural environment.