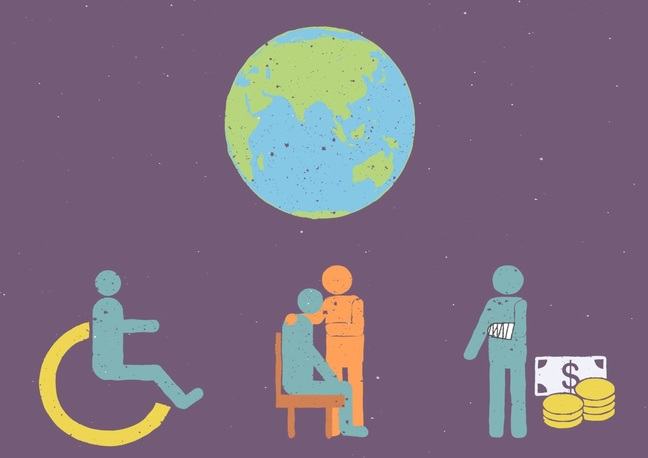 Most work-related deaths and non-fatal occupational accidents occur in low- and middle-income countries in South-East Asia and the Western Pacific region. These countries have the highest proportion of the world’s working population, in addition to having a high proportion of workers in risky jobs, as is found in other developing countries. Nevertheless, high-income countries also present a significant number of work-related fatalities, though fatal accidents represent a smaller portion of their death toll. 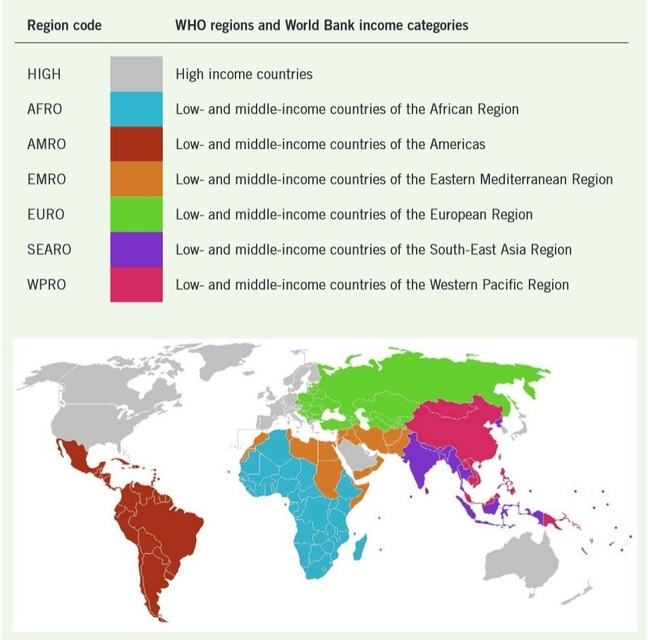 As illustrated above the biggest component of occupational-related mortality, 2.4 million, is linked to work-related diseases with 0.3 million linked to occupational injuries. However, in industrialized countries the share of deaths caused by occupational injuries and work-related communicable diseases is very low compared to the share caused by non-communicable diseases. (Global Estimates of the Burden of Injury and Illness at Work in 2012, Takala).

ILO estimates show that the fatality rate in advanced industrialized economies is almost half that of Central and Eastern Europe, China and India. Selected hazardous jobs can be from 10 to 100 times riskier. Construction sites in developing countries are 10 times more dangerous than in industrialized countries.

Hazardous sectors such as agriculture, mining, construction and fishing continue to take a heavy toll on human lives and health. Within sectors, some jobs are more dangerous than others. (International Labour Organization, 2009).(ILO; Safety in numbers)

Agriculture is one of the three most hazardous sectors, in both industrialized and developing countries. Moreover, it currently employs about half of the world’s labour force – roughly 1.3 billion people. The ILO estimates that up to 170,000 agricultural workers are killed each year. This means that workers in agriculture run at least twice the risk of dying on the job as compared with workers in other sectors. Millions of agricultural workers are seriously injured in workplace accidents with agricultural machinery or by being poisoned by pesticides and other agrochemicals.

Mining accounts for only about 1 per cent of the global workforce, but it is responsible for up to 5 per cent of fatal accidents at work (at least 15,000 per year, or over 40 each day. Despite considerable efforts in many parts of the industry to improve its safety record, in countries engaging in mining, it remains their most hazardous occupation, when the number of people exposed to risk is taken into account.

In the construction industry, at least 60,000 people are fatally injured on building sites every year. Many hundreds of thousands more suffer serious injuries and ill-health. The main causes of fatalities in the sector include falls, fatal crush injuries and the impact of falling objects, and electrocution.

Fishing is amongst the most dangerous industries in many countries. In Denmark, from 1989 to 1996, the rate was 25-30 times higher than the rate for those employed on land. In the United States in 1996, the death rate was estimated at eight times that of persons operating motor vehicles for a living, 16 times higher than such occupations as fire-fighting and police work and over 40 times the national average. In China, over 400 fishermen are reported killed in accidents each year. In Tunisia in 1994, the fatality rate in the fishing industry was double the national average.

Ship breaking is also particularly hazardous, not least at the Asian beachheads where much of the work is now done. Workers’ safety is jeopardized by the absence of basic precautions, work planning and training. Low reporting standards mean that the health and safety statistics for this sector are erratic and unreliable. 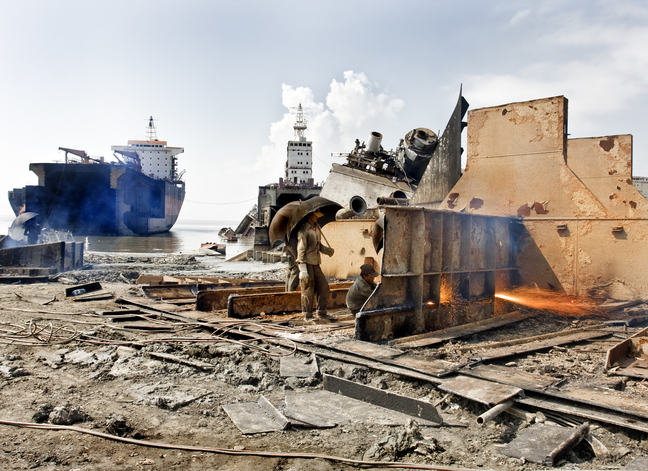 Workers in the informal sector face major safety and health problems. This covers a wide range of precarious jobs, mainly in developing countries, in which the worker does not have any formalized relationship with an employer. In general, informal workers tend to have a poor working environment and welfare facilities, and virtually non-existent occupational health services. According to a recent ILO report, the informal sector now accounts for about half of the workers in the world. In some countries, such as Bangladesh, Mali, Nepal and Pakistan, it represents 70 per cent of total employment. Over the past decade, it is estimated to have created over 90 per cent of the new jobs in Africa.

The ILO has produced a series of International Hazard Data Sheets for specific occupations such as farmers, stone cutters, welders and scaffold workers.

ILO has established a statistics web-site on cases of injury with lost workdays, rates of occupational injuries and days lost by economic activity in a number of countries in all regions of the world. Figures from this statistics illustrate large differences in the rate of occupational fatalities between countries.

Competitiveness, safety and health go hand-in-hand; the lower the number of accidents the higher the competitiveness and Productivity (Takala et. al., 2014). Figure 4 in the link below illustrates the association between competitiveness as measured by the World Economic Forum in 2013, and total accident rates using data reported to the ILO.

Major industrial accidents are reminders of the unsafe conditions still faced by many. For example, the 2013 collapse of the Rana Plaza building in Bangladesh resulted in the death of 1,129 individuals and injured 2,500 more, mostly factory workers making garments for overseas retail chains (The Guardian, 2013). 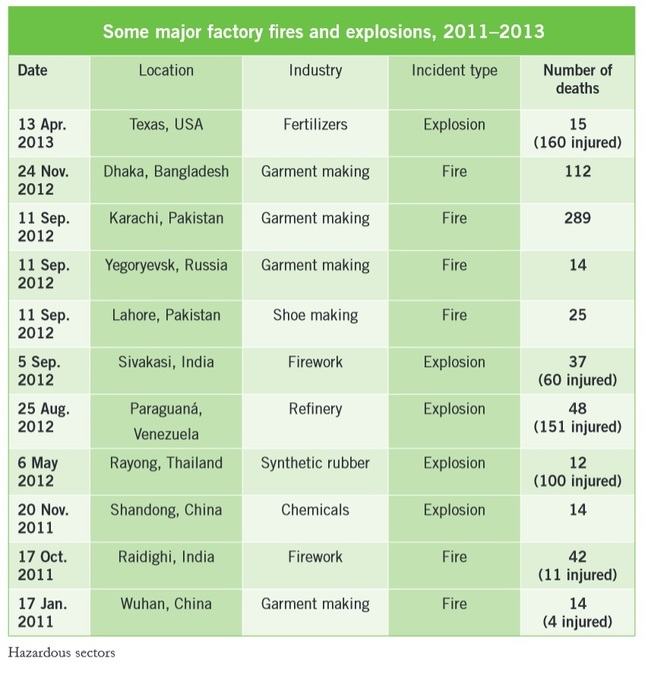