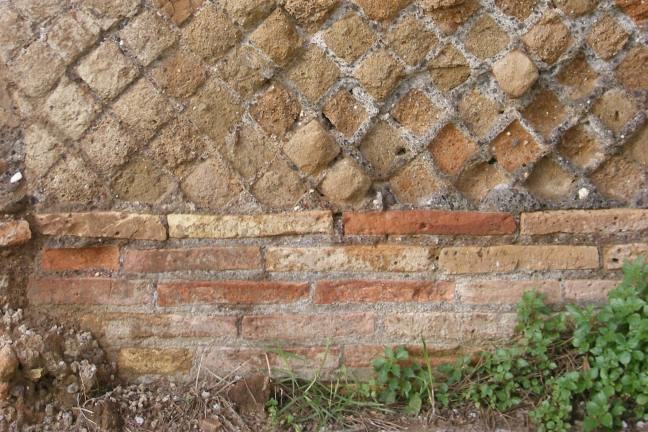 You have been looking at a lot of buildings over the last few weeks, so we thought it would be good to explain a little bit about how they are made. This article provides a check list of types of building materials and also a sense of how the buildings were constructed. Much of this information is used in the computer reconstruction of our buildings, as you will see a bit later in the context of Building Five.

Roman construction is famed for the use of concrete and the buildings at Portus are no exception. Roman concrete is composed of mortar and aggregate. The mortar was a mixture of lime and a volcanic sand called pozzolana. Different materials were used for the aggregate, but at Portus primarily broken bricks and tiles and roughly fist-sized pieces of a volcanic stone called tufa were used. Concrete was used to make the foundations, walls and vaults.

The concrete walls were all faced with either brick or stone. Brick faced concrete is called opus testaceum. Concrete faced with irregularly shaped stones is referred to as opus incertum. Reticulate facing is made up of stones pieces with a worked square face set on the point forming a diagonal grid. Reticulate facing was first popular under the emperor Augustus but then made a resurgence under the emperors Trajan and Hadrian. The buildings at Portus with reticulate facing date to the Trajanic and Hadrianic periods. Walls with both brick and reticulate facing are called opus mixtum. Wall facing with alternating rows of bricks and small rectangular stone blocks, called opus vittatum, were prevalent in the later Roman period at Portus. 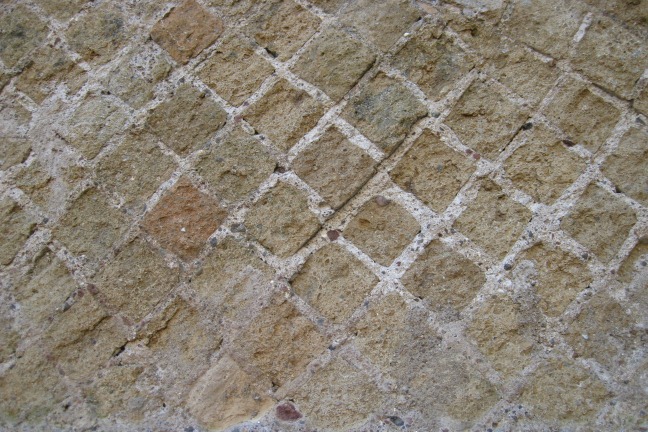 Although it does not survive often in the archaeological record, timber would have been used extensively at Portus. It was needed to create the formwork for the concrete foundations and vaulting, as well as the centering frames for the latter. For the foundations, all that remains is the impression of the wooden posts and boards, called shuttering, in the facing of the concrete. However, in one of the cisterns at Portus, the water level remained high enough to preserve some of these timbers in situ.

The timber formwork to create the concrete vaults would have been quite extensive, requiring multiple arched timber centering frames, boards to lay atop the frames, and then a framework of timber around the centering in which the mortar and aggregate would have been laid in layers. Sometimes two layers of bricks would be laid atop the boards in order to protect the timber from the concrete, allowing the formwork to be re-used to make additional vaults.

Timber was also needed for scaffolding – consisting of tall poles, horizontal cross beams and planks to create walkways. The evidence of the scaffolding can be seen in the appearance of putlog holes (the holes in which the horizontal beams would rest) in the walls of the buildings at Portus. There is also the possibility that some of the buildings had timber truss roofs instead of concrete vaulting. On a smaller scale, timber would have also been needed to create doors. All of this carpentry work required a considerable use of iron nails, a ubiquitous small find at the Portus excavations. 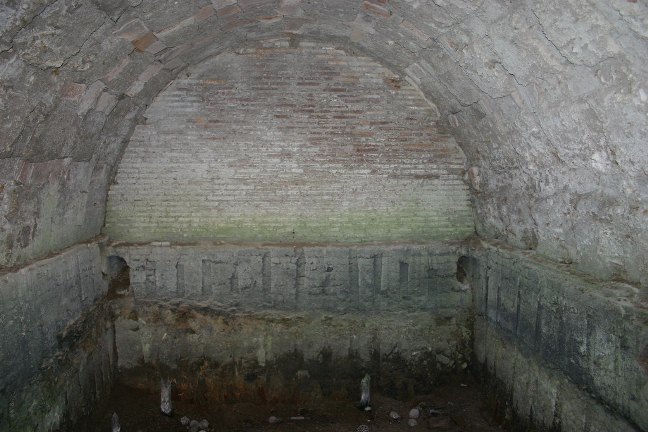 Impressions of timber formwork (shuttering) in the foundations of a cistern at Portus. Remnants of the timber posts can be seen at the bottom of the photo - Simon Keay © University of Southampton 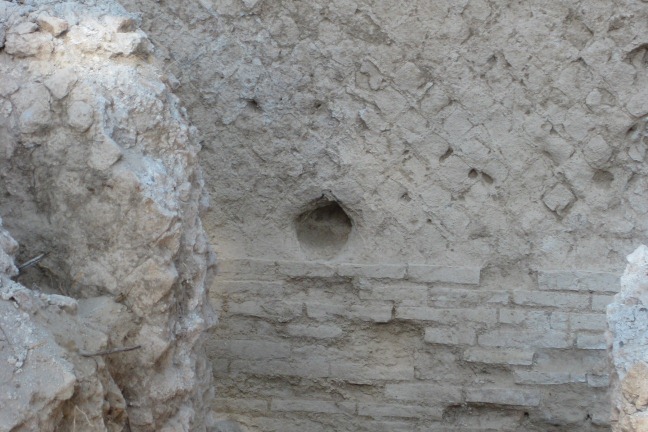 You might remember this cistern from Week One, where we showed dendrochronology samples being extracted from these timbers. It is also where we discovered some of the beautiful brick stamps seen in week two. In week six you will visit this room again when we study the Castellum Aquae in more depth. You can watch an animation below that shows the construction process of this room.

As we saw last week, marble is also to be found at Portus, particularly in the Palazzo Imperiale. White marble was used to make column capitals, bases and entablatures. Coloured marbles were used for columns shafts, while both white and coloured marbles were used as wall veneer and floor paving. Small fragments of marbles (called tesserae) were used to create mosaics. 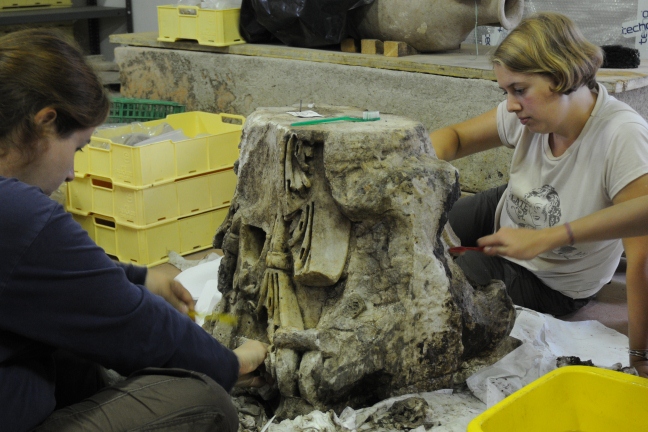 Next week you will see the beautiful photogrammetric record produced of this capital once we had finished cleaning it. This means that we can incorporate it in our models and also take volumetric and other measurements, even when the object is in storage.

Other wall surface treatments are also present at Portus. Some floors were laid with small rectangular bricks in a herringbone pattern called opus spicatum. Painted plaster decorated many of the walls and vaults. A waterproofing mortar called opus signinum is found lining the cisterns and was also used as a bedding layer for adhering all of the various surface treatments to the floors and walls at Portus.

Most of the core construction materials used at Portus were obtained from the area around Rome. It was a common practice in most societies to use materials close to hand for their building needs – the closer the source, the less transport required and, therefore, the cheaper the overall construction cost. As has been mentioned previously, the bricks were produced in the Middle Tiber Valley and sent by barge down the Tiber through Rome to Portus. The elements for Roman mortar and concrete (lime, pozzolana, tufa) were quarried around Rome and transported by wagon to the Tiber river to then be sailed down to Portus. Timber was acquired mostly from the forests on the Appenine mountains. Like the concrete materials, the cut trees would then be transported overland until a navigable part of the Tiber river could be reached.

Not all the materials were found in the region of Rome. The lavish decorative materials, the marbles, came from around the Mediterranean. The nearest source of white marble was at Carrara (Luna), located at the top of the west coast of the Italian peninsula. The rest of the marbles were imported from around the empire – primarily from Greece, Turkey, Egypt and North Africa. The extensive use of these decorative stones reflected the wealth and power of the person funding the building project – in this case, the emperor himself.

Having provided that overview of construction, I will hand over to Penny who will indicate the different building materials to watch out for as you look at buildings around the site. Perhaps you might start categorising them when you spot them in the images we provide. 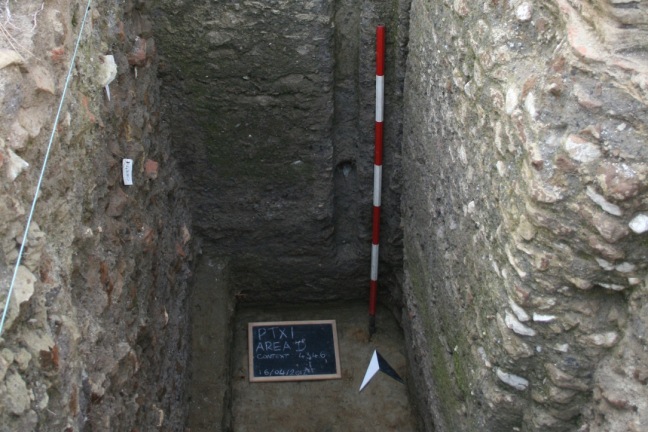 Opus caementicium used as foundations in Building 5. Note the vertical slot which is an impression left by a post of the wooden shuttering. - Hembo Pagi © University of Southampton 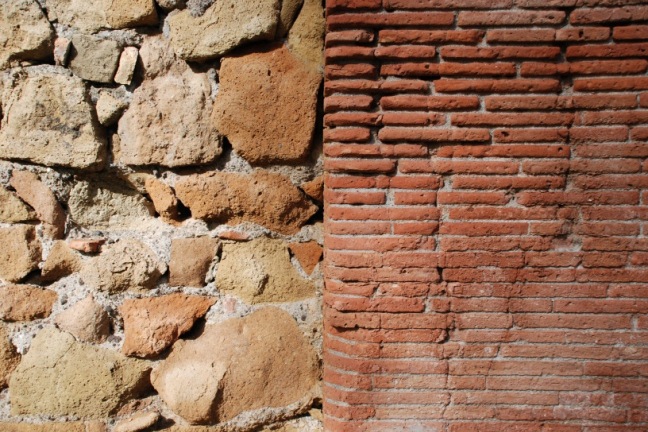 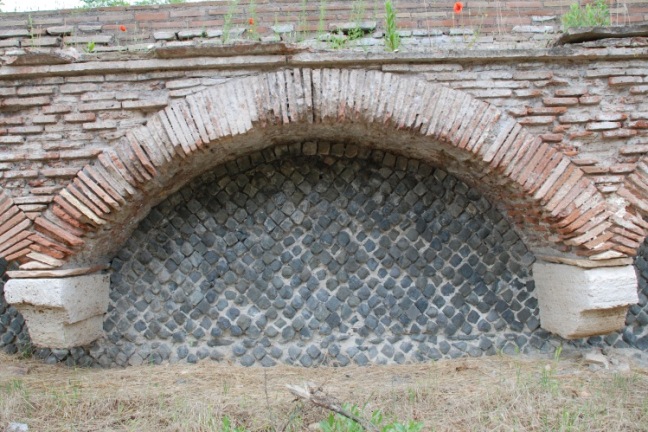 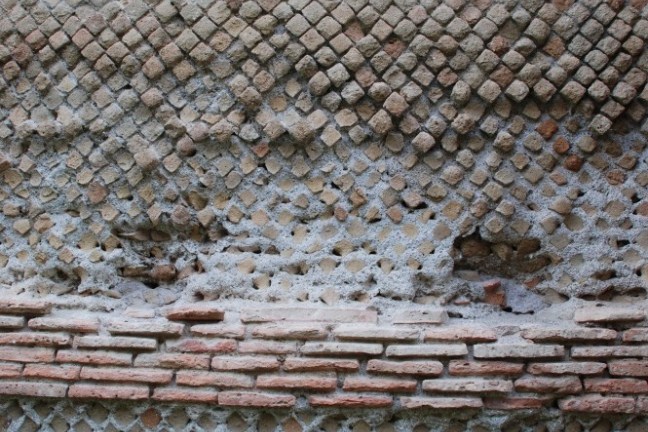 Opus mixtum: opus reticulatum in tufa above and below a band of opus testaceum. - Hembo Pagi © University of Southampton 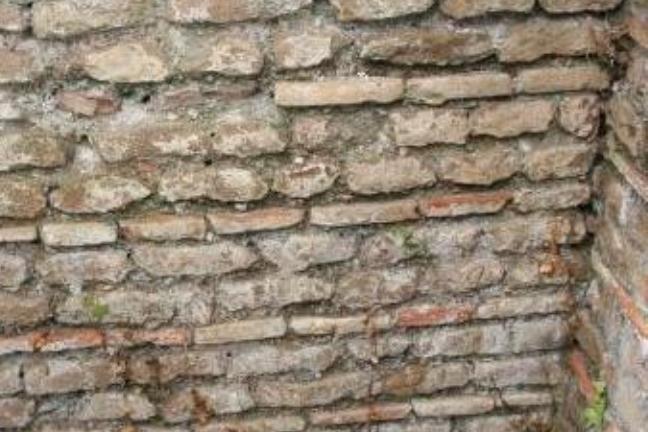