This content is taken from the BSAC's online course, The Role of Vaccines in Preventing Infectious Diseases and Antimicrobial Resistance. Join the course to learn more.
View course
2.13

Role of Vaccines in Preventing and Reducing AMR

Vaccines are a critical tool that can play an important role in reducing AMR.

Vaccinating humans and animals is a very effective way to stop them from getting infected, thereby preventing the need for antibiotics as illustrated in this diagram: 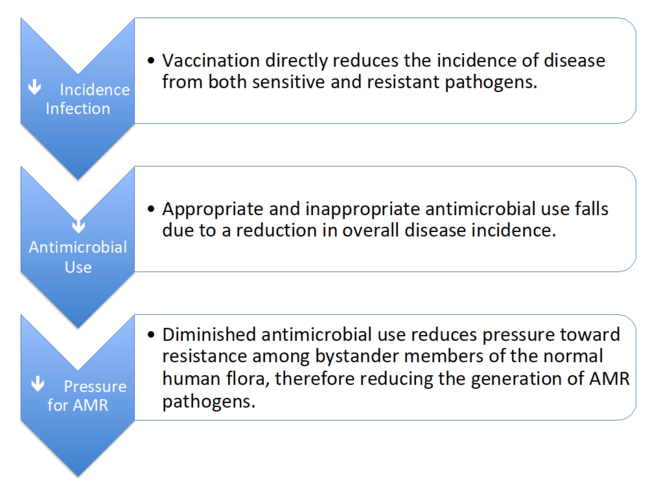 Existing vaccines already have an impressive track-record of reducing AMR. For example, vaccines against the bacteria Haemophilus influenzae B and Streptococcus pneumoniae have resulted in a dramatic reduction in disease burden and have been associated with decreased incidence of resistant strains. Additionally, both vaccines have an additional “indirect” effect on AMR by reducing antibiotic usage and therefore selection pressure on pathogens. Vaccines against viruses, such as influenza, also have a role to play, because people often take antibiotics unnecessarily when they have symptoms, such as fever, that can be caused by a virus.

Effective vaccines already exist for a wide range of infections, however their use is far from universal due to the numerous reasons we explored in Week 1. Expanding the use of existing vaccines will reduce the use of antibiotics and the development of resistance. For example, if every child in the world under 5 years old received the vaccine to protect them from infection with the bacteria Streptococcus pneumoniae (which can cause pneumonia, meningitis and middle ear infections), this would prevent an estimated 11 million days of antibiotic use each year.

Vaccines also offer a long-term sustainable approach to infection prevention. For example, vaccines against diphtheria and pertussis have been in use for 70 years without resistance developing. In contrast, in the context of AMR, a continual pipeline of novel antibiotics are needed for effective vaccinations. Given the limited pipeline of new antibiotics in the last decades this point becomes all the more salient.

Schematic representation showing that the use of antibiotics selects for resistance (R), making the antibiotic obsolete. Therefore, a continual pipeline of new antibiotics is needed for effective treatment. In contrast, vaccines can be used for a very long time without generating significant resistance. Reference: Bloom et al. PNAS. Dec 18 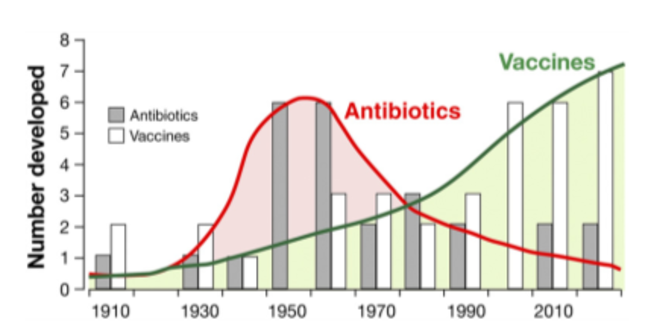 Developing and using new vaccines to prevent bacterial diseases can further reduce the development of resistance. For example, antibiotics are currently the standard medical intervention for common diseases such as Group A Streptococcus (which causes “strep throat”), for which we do not yet have vaccines. Development of a vaccine would help prevent cases and the need for antibiotics.

We also need vaccines to stop people from catching diseases caused by bacteria that are now frequently antibiotic-resistant. For example, there is an alarming spread of multi-drug resistant Neisseria gonorrhoeae infection and concerns that soon genitourinary infection with this bacteria could be untreatable. A vaccine would help prevent infection and spread of this organism and avoid the need for antibiotics.

Similarly, new vaccines targeting Staphylococcus aureus (which causes skin and soft tissue infections), Klebsiella pneumoniae (which causes pneumonia and infections of the blood stream and urinary tract) and many others could protect people against diseases that are increasingly difficult to treat with antibiotics.