How does insulin change in type 1 diabetes?

Type 1 diabetes is an autoimmune condition - this means that the body attacks itself instead of attacking infections and other invading objects.

The body’s immune system destroys the β (beta) cells in the pancreas. These are the cells that produce insulin, so insulin is no longer made in type 1 diabetes.

It is not known why the body is triggered to attack the insulin-producing cells but there is probably a genetic predisposition and an environmental trigger. 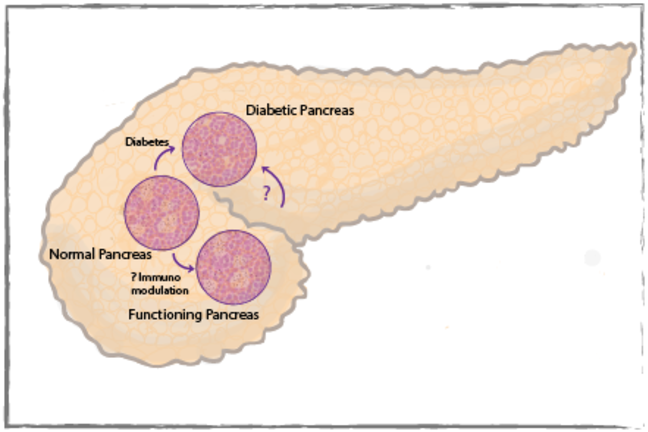 Figure: the effect of diabetes on the pancreas

If you were to look down a microscope at a normal pancreas, you would see healthy β (beta) cells (seen as cells in the pink patches in the picture). These cells would be producing insulin in response to changes in blood glucose concentrations.

In some people, the immune system attacks the beta cells, causing them to die, therefore no longer making insulin. This is what happens in diabetes. In the research world there has been considerable interest in whether beta cell destruction can be halted by altering the immune system (immunomodulation).

Type 1 diabetes is typically, but not always, diagnosed in children and adolescents and without insulin treatment it would be fatal.

Did you know? Patients typically lose weight before diagnosis as adipose and muscle are broken down rather than being built up due to the lack of insulin.

Insulin treatment is necessary in type 1 diabetes because the body cannot produce insulin of its own.