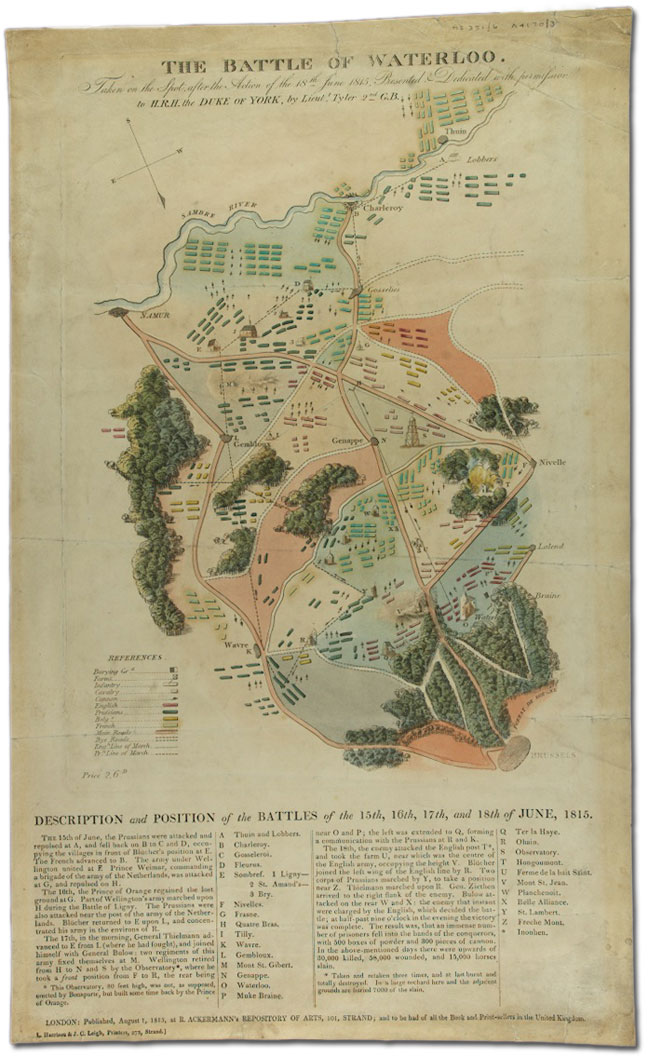 The Battle of Waterloo, published 1 August 1815 by R. Ackermann, London. © University of Southampton

The Battle of Waterloo on 18 June was the culmination of four days of active operations that began on 15 June with Napoleon and his forces crossing the border into the Low Countries and attacking the Prussian corps commanded by Lieutenant General Zieten.

Zieten, who had been instructed not to attempt a serious defence of his position on the River Sambre, either side of Charleroi, retired to Sombreffe, whilst other Prussian forces moved to a position between there and Ligny: they were in place by the afternoon of 16 June. At the same time the allied army had been ordered by Wellington to concentrate its forces at Quatre Bras.

Activity
Use the link at the foot of this step to download a PDF version of the map above. It includes an annotated version with a key to help you identify places mentioned in the text.

The engagements of 16 June
The Battle of Ligny, which began at 3 p.m. on the 16th, was an intense battle between the Prussians and the French under the command of Napoleon. Although Napoleon could not call on the assistance of Marshal Ney, as he was engaged in battle elsewhere, the French forces prevailed. At the end of the day with their reserves exhausted, the Prussians retreated, moving towards Wavre the following day. At the same time as the Battle of Ligny was underway, another battle was being fought at Quatre Bras. Here the Anglo-Allied army faced that of Marshal Ney. The momentum of this battle swung back and forth as the arrival of fresh troops gave one side or the other the advantage. Eventually the advantage swung in Wellington’s favour and he gained a modest victory as Ney’s forces were repulsed.

Learning of the Prussians’ defeat, and of their retreat towards Wavre, Wellington pulled his forces back to around Mont St Jean, which was about ten miles west of Wavre. He determined to give battle on the 18th June from this position, having received assurances from the Prussians that they would come to his aid.

The armies at the Battle of Waterloo
The Battle of Waterloo commenced at 11 a.m. on 18 June with an attack by Napoleon against the château of Hougoumont. The force that the French army attacked that morning was the Anglo-Allied army commanded by Wellington. Wellington had 74,300 troops in the Anglo-Allied army, whilst Napoleon commanded 74,500. However, Wellington was hampered by the variable quality of the coalition forces under his command and was considerably outgunned — he had 156 guns as opposed to the 254 French. Another 30,000 French troops under the command of Marshal Grouchy were based to the east. These were to engage part of the Prussian army of the Lower Rhine at Wavre as the Prussian forces were making their way to Waterloo. Some of the Prussian army were not to see action at Waterloo as they were still marching from Wavre to Waterloo when the battle ended, but Field Marshal Blücher with forces of around 12,000 infantry and 3,000 cavalry reached the battle of Waterloo at a crucial point in the afternoon.

The Anglo-Allied army
The Anglo-Allied army was made up of 26,000 British, who had a core of veteran soldiers; 31,000 Germans which included 5,100 King’s German Legion, who were experienced and highly trained; 12,000 Hanoverians some of whom had received only basic training; 5,450 Brunswickers, who were young and inexperienced, but who had proved their quality at Quatre Bras on 16 June; 7,200 Nassauers, who were again untried and an unknown quality; and finally 15,200 Dutch and Belgian troops, of whom Wellington expected little and suspected their loyalty as many had previously served with the French army. Wellington divided the forces into corps.

The largest of these, at around 30,000 troops, was I Corps under the command of the Prince of Orange. This corps included two British infantry divisions (First and Third), Major General George Cooke’s First British (Guards) Division, two Netherlands infantry divisions (Second and Third) and the Netherlands Cavalry Division commanded by Lieutenant General Baron de Collaert. The Prince of Orange was given this command principally on diplomatic grounds, although he had military experience having served as an aide-de-camp in the Peninsula: the King of Netherlands agreed the more readily to Wellington taking overall control of the Anglo-Allied army. II Corps was commanded by Lord Hill, whilst Sir William De Lancey commanded the reserve and Lord Uxbridge the cavalry, including that of the Prince of Orange. Wellington ordered the mixing of nationalities, experienced and inexperienced troops, regulars and militias at both corps and divisional level in an endeavour to strengthen the forces.

The French
The French army at Waterloo had three infantry corps (I, II and the Imperial Guards) of roughly the same size (roughly 20,000), each with its own cavalry and artillery, commanded by the Comte d’Erlon, the Comte Reille and the Comte Drouot respectively. VI corps under the command of Comte Lobau, which was smaller in size, was part of the reserve, but included two infantry and cavalry divisions. Also in reserve were two heavy cavalry corps.

The battlefield and battle lines
The battlefield of Waterloo is a small one — approximately 4 miles wide and 3 miles deep — although the fighting was confined to a rectangle running 3 miles east from Hougoumont. The Anglo-Allied front line was deployed along the Mont St Jean Ridge, which provided the allies with some protection from artillery fire. To the north of this ridge, at the Mont St Jean farm and Mont St Jean village, De Ghigny’s Netherlands light cavalry and Lambert’s brigade were in reserve. A short distance in front of the ridge were from west to east the strategically important château of Hougoumont, La Haie Sainte, the Elm Tree crossroads and the Ohain Road, the Papelotte, La Haie and Smohain. To the south of these landmarks along the Belle Alliance Ridge, and sometimes only a few hundred yards from the allied occupied positions, was the French front line. The reserve troops were stationed at Rossome Farm to the south of the French front line and Napoleon used the heights of Rossome as his first headquarters.

The allied army, apart from the Tenth Infantry Brigade which arrived at 11 a.m. after a forced march from Ghent, had been in position since the previous evening. With the exception of the First Netherlands Brigade, commanded by Bijlandt, deployed slightly to the north-east of La Haie Sainte, the Anglo-Allied front line was made up of British and German troops whom Wellington could trust. These were his most reliable infantry regiments, commanded by experienced generals, many of whom were veterans of the Peninsular War. Hougoumont was manned by British Guards and Nassauers and Hanoverians, whilst the Second Light of the King’s German Legion were at La Haie Sainte. Wellington placed the Dutch and Belgians where they might get into least trouble, at the ends of the line. A considerable proportion of troops that formed Lord Hill’s II Corps under the command of eighteen-year-old Prince Frederick of the Netherlands, were detached in the Hal area.

After the soldiers passed what had been an uncomfortable night, with heavy rain and lack of shelter and supplies, they awoke on the 18 June to the prospect of a battle. All they had to do was wait to see where and when Napoleon would open the attack.

A regular return of the strength and position of the army was made to its commander. This shows the scale of the British forces and their disposition on the morning of the Battle of Waterloo. It was British practice to prepare returns like this each day. 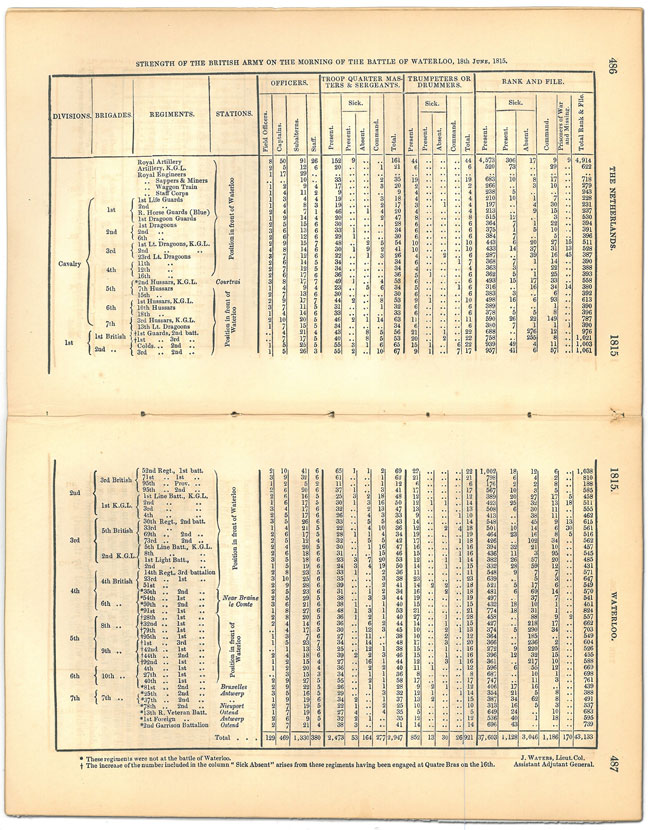