Find out more
Home Why are dairy farmers taking to the streets in protest?
Published on October 14th, 2015

Andrew Ainslie is an educator on the University of Reading’s free online course, “Our Hungry Planet: Agriculture, People and Food Security“. In this post, he reflects on farmers’ recent protests about the price of milk and explains why milk is likely to be one of the most volatile agricultural commodities in future. 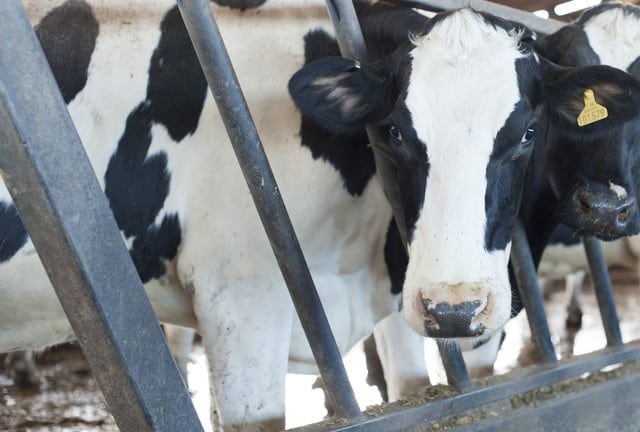 The past 12 months have seen a noticeable upsurge in the number of protests by dairy farmers in the UK – and in the rest of Europe – over the consistent fall in the “farm-gate” price of the milk they produce.

Recently, one farmer marched some of his cows through a supermarket in Staffordshire, while exasperated farmers in Brussels pelted police with eggs and blockaded traffic with their tractors. Elsewhere, farmers have taken to buying up stocks of milk from store shelves before giving it away, or selling their dairy products directly to consumers.

All of this is an attempt to bring to the attention of government ministers the parlous state of the dairy industry.

Fresh milk as a loss leader

Something that farmers find very frustrating is the way that some of the supermarkets use fresh milk in particular as a “loss leader” – a product that is sold below cost price to get customers through the supermarket doors.

But their problems actually begin further back in the supply chain, with the big UK processors of dairy products (such as Arla and Dairy Crest) again dropping the prices they pay to farmers in August this year.

In fact, the milk price paid to many farmers has dropped 30% over the past 12 months, with no equivalent price saving passed on to consumers, who continue to pay around 79 pence per litre of milk on the supermarket shelves.

The National Farmers Union calculates that, on average, UK dairy farmers need to realise a price of 30 pence per litre to break even, but many are now only getting 23 pence per litre for their milk. This means that the gap between the farm-gate price for milk and the retail price is at its widest for 20 years, threatening the livelihoods of many dairy farmers.

Why is this so?

The effect of overproduction

Dairy farming is now a globally integrated industry. Some of the challenges are integral to the industry: recent hot and dry conditions in some European countries have reduced crop yields and raised the prices farmers pay for animal fodder, putting dairy producers’ profit margins under severe strain.

Other reasons have more to do with the way milk supplied in other countries affects our own milk market: how the global overproduction of milk affects the prices that UK (and other) farmers can realise for their dairy products; and how shortfalls in milk production in one country or region are easily fixed with imports of milk products from surplus-producing regions of the world.

Recent sharp increases in production by farmers in the US and New Zealand have contributed to the current oversupply, and put pressure on UK prices. This level of global integration is one reason why the number of dairy farms in England and Wales has dropped by over 30% since 2005. And Britain is not alone in this regard: other countries have also seen an alarming drop in the viability of dairy farming.

The effect of EU subsidies

Another factor is the very high subsidies paid to farmers in the EU, who represent a historically powerful and well-organised lobby. Dairy farmers in the EU have condemned a recent decision by the European Union to put a stop to a quota system that sets limits on milk production, and applies tariffs that effectively curb imports from outside Europe, and in so doing, shores up milk prices.

In effect, to cope with increased supply and thus stiffer competition over price, farmers have to “get big or get out” – increase the size of their operations with the hope of improving their economies of scale and bargaining power.

The effect of geo-politics

Geo-politics also affects milk prices. The New York Times suggests that EU and US sanctions, which followed President Vladimir Putin’s annexation of Crimea and the destabilisation of eastern Ukraine, prompted a Russian response: the banning of imports of European agricultural produce. This move hit demand for cheese and meat, and caused prices to fall across Europe.

Unrelated to this, but also putting pressure on milk prices, is the drop in demand for imports of European agricultural products from China, where the economic slowdown is having global impacts across a range of economic sectors, including agriculture.

Concerns about the future

The Food and Agriculture Organization of the United Nations (FAO) suggests that milk is set to become one of the most volatile agricultural commodities in future. As higher incomes in developing countries push up demand for animal-based products, the demand for animal feed also increases. Fluctuations in the international price of oil add another layer of volatility.

What is clear is that dairy producers have a right to be very concerned about the future. Food production and consumer pricing are inextricably linked to global pressures from economic to political, and other factors such as climate.

To find out more about how our place in the world affects the food we eat, and how you could help ease these pressures, join the free online course “Our Hungry Planet: Agriculture, People and Food Security“.