About Chemistry and Toxicology

Learn more about chemistry and toxicology.

Φάρμακον reads as pharmakon. This is an ancient greek word that brings two key concepts together: poison and drug. Nowadays these words have a drastically different meaning: were the ancient Greeks wrong? In order to avoid any confusion it is safer to keep these two words separate (imagine entering a pharmacy store and asking for a poison!) but we know that poisons, drugs, and medicines are not different entities and it all depends on the intended use and the dosage.

Dosage is the total quantity of a chemical administered to, taken up by, or absorbed by an organism, an organ, or a tissue, and is usually normalized as chemical quantity divided by the mass of the treated organism.

A vast group of chemicals is also identified as bioactive: this means that they are capable to influence biological and physiological processes in a complex organism following a dose-related response. Drugs, poisons, plant metabolites, toxins, and some inorganic elements are considered bioactive molecules and most of them are capable to carry out their activity.

Activity is measured as an appreciable change in a physiological, vital, or biological parameter chosen as a reporter, and is related to dose. This means that increased dosages result in increased responses, logically within a certain dosage range. 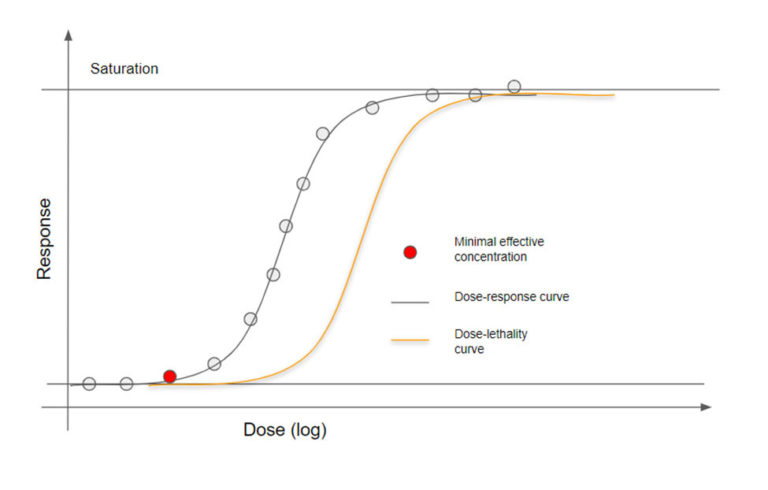 In most of the cases, the mathematical function that best represents this correlation is the sigmoid curve. The peculiarity of this response curve resides in the initial lack of response for very low concentrations, followed by a fast-growing exponential phase reaching a plateau at high concentrations.

The trend observed suggests that there is a minimal effect threshold that is reached at a certain concentration, called minimal dose for response. In a population sample, this parameter is expressed as ED50 and ED95, terms that mean “the minimal effective dosa which elicits an effect on 50% and 95% of the sample population.

Another key concept is the Maximum Tolerated Dosage (MTD), which is the highest possible, but still tolerable, dose level.

Once a chemical contacts our organism, such as a medicine administered to us or a contaminant to which we are exposed to, it undergoes a series of steps summarized in the acronym ADME, which stands for Absorption Distribution Metabolism Excretion Each of these steps ends up lowering the effective final drug concentration.

Each bioactive molecule, named xenobiotic, according to its physical-chemical properties, is differently subjected to absorption, organism distribution, hepatic metabolism and final excretion. Therefore its minimal effective dose depends on all these variables. Once passed the first lagging phase, our sigmoid curve raises quickly in response and in this phase a small increase in concentration results in a big activity change. When the final phase is reached, the curve follows a plateau; in this phase changes in concentration result in minimal or no changes in activity and the drug has reached a maximal effect.

Not all drugs reach the plateau concentration without causing unwanted side effects and health concerns. In fact, the concepts of minimal effective dose and maximum tolerated dose are not sufficient to fully describe the properties and kinetics of a xenobiotic.

Lethality is also expressed as LD50 and LD95, which mean the dosage that kills 50 and 95% of treated animals, respectively. We can imagine very similar sigmoid curves for lethal or toxic effects, at higher drug concentration.

These types of measurements and tests are part of the drug discovery process, mostly done in the pre-clinical phase for toxicological assessments (tests on cells and on animal models) and in the following clinical phase (test on human subjects).

Talking about packaging derived chemicals present in foods/drinks – take for example Bisphenol A (or BPA) – the dose-response curves are non-sigmoidal: in these cases, there is no evident dose-response correlation. This is not totally surprising, actually, it is expected: it is the same phenomenon the scientists observe in experiments using natural hormones. This observation strongly suggests that some chemicals, such as BPA, acts in a similar way as hormones and signaling molecules do. A slight change in hormone concentration is capable to trigger massive changes in many organs and perhaps the entire organism.

Finally, the factor of time seems to play a key role when talking about endocrine-disrupting chemicals. A long-term, low-dosage chronic exposure to BPA can lead to slow, long-term endocrine effects due to its activity as an estradiol-like chemical, competing with estrogen receptors and antagonizing the androgen receptors. We could say Time makes the poison.

We also encourage you to register and follow the EitFood Course on a related subject, that you can find on https://www.eitfood.eu/education/e

https://www.eitfood.eu/public-engagement/projects/food-for-thought-the-interaction-between-food-and-brain Relations between food and brain – Find out how your diet affects your brain, and your brain affects your diet