Skip main navigation
Home / Healthcare & Medicine / Metabolomics: Understanding Metabolism in the 21st Century / How biochemicals interact with the environment to influence the phenotype

How biochemicals interact with the environment to influence the phenotype 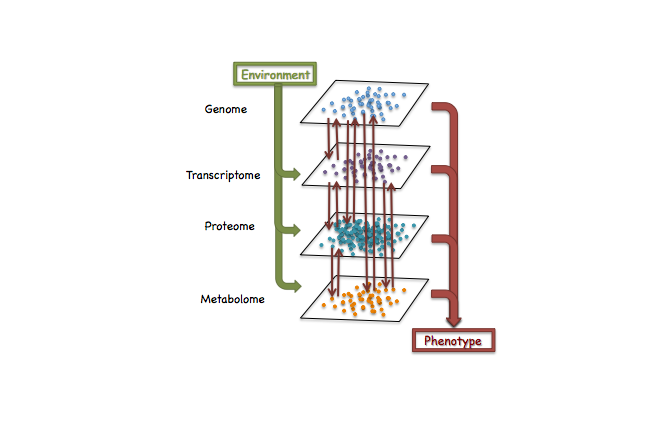 So far, we have discuss how different components (metabolites and enzymes) interact in metabolism and how these interactions help us to investigate the function and phenotype of biological systems. We also need to consider the other biochemical or functional levels within a system and the interactions between the four functional levels.

The four functional levels provide us with complementary information.

The genotype is the genetic instructions inherited and encoded in the genome. These instructions produce a wide range of characteristics and functions including the colour of your eyes and how your heart operates. The genome is ‘relatively’ stable but genes are subject to regulatory processes. For example, the methylation of genes by epigenetic processes can switch genes ‘on’ or ‘off’.

The environments in which we live, as well as our lifestyles, influence how we function. For example, an individual who cycles 100 kilometres each week will operate with a much healthier function than someone who has an unhealthy and unbalanced diet and does not exercise. Unlike the genome, the environment and our lifestyles are dynamic and periodically change. For example, we may exercise only at weekends and not during the working week. Our environments and lifestyles are different during the week at work compared to the weekend when we relax and enjoy our hobbies.

The phenotype is defined as the physical and biochemical characteristics of an organism as determined by the interaction of its genetic constituents and environment, and for humans their lifestyle. The phenotype is also dynamic. For example, the concentration of metabolites detected in urine are different before and after we undertake strenuous exercise. During strenuous exercise the concentration of lactic acid increases in our muscles during anaerobic respiration. This increase in lactic acid that makes our muscles ache.

The metabolome is the furthest downstream product of the genome and its interaction with the environment and is therefore considered to provide a direct and sensitive measure of the dynamic phenotype at the molecular level – the metabolome defines what has just happened.

Interactions between and within the four functional levels

There are various levels of interaction in biological systems with feedback and feed-forward loops regulating the molecular interactions that influence the cellular phenotype. These include interactions both within and between the functional levels.

One example of interactions between two functional levels is metabolism, between the proteome and metabolome. In this interaction metabolites are produced in the presence of an enzyme (and often a cofactor).

An example of an interaction within one functional level is protein-protein interactions that occur in the proteome. Here two or more proteins physically interact and form a single multi-protein complex which provides greater efficiency in the synthesis of metabolites, either through the consumption of less energy or a higher rate of synthesis. Through this approach multiple metabolic enzymes can collaborate and work together to synthesis a metabolite or metabolites.

Probably the most frequently used example of interactions which regulate a biological system is the regulation of the lactose operon in the bacteria Escherichia coli. Glucose is the preferred fuel source in E. coli and so in the presence of glucose the enzymes for the catabolism of the alternative carbon source lactose are not activated and the transport proteins used to transport lactose into the cell are inactive. However, when glucose levels are low the lactose operon and lactose transporters are no longer switched off and are instead switched on and lactose is used as an energy source.