Why is antibiotic resistance a problem?

As antibiotics become increasingly ineffective, even minor surgeries and routine operations could become high-risk procedures
View transcript
5.5
Hello, my name is Vanessa, and at age 25 I was an ambitious, lively girl who had all sorts of dreams and plans ahead. Until one day, 27 March 2004, my life suddenly changed when I was a front seat passenger in a car that smashed into a concrete wall. I sustained massive injuries to my abdomen, face, pelvis, neck, and back. Paramedics spent two hours resuscitating me before taking me to the Charlotte Maxeke Johannesburg Academic Hospital. After some months, my body slowly recovered from the excruciating pain it caused, but correcting the physical appearance of my distorted face would take close to a decade, as I needed to consult with different super specialists.
50
Apart from surgeries, at the time of the accident I had an ocular implant, orbital full reconstruction, and artificial eye made. My fourth prosthetic was an alloplastic zygoma implant performed by a maxillofacial surgeon, followed by an ectropion surgery by a plastic surgeon, because the incision under my lower eyelid adhered to the alloplastic. Two weeks following surgery, one day while shopping I felt moisture on my cheek. When I got into my car, I pulled down the rear view mirror and saw pus seeping out. Over the next 11 months, I underwent several debridement and reconstructive surgeries between my plastic surgeon and ENT surgeon, until finally the implant was removed. Tests revealed that it was riddled with methicillin-resistant staphylococcus aureus, MRSA.
98.7
I’d never heard of antibiotic resistance before, yet during that time I had taken copious amounts of antibiotics between my different doctors. Communication was a very siloed process between them, and none had access to what one or the other was prescribing me. After removing the implant, I was told that we couldn’t do surgery in that area for at least a year. I was given a course of vancomycin and realised that I couldn’t afford to have any more failed surgeries. The MRSA had eaten away so much soft tissue under the eyelid that an artificial eye couldn’t even stay in place, and the zygoma was back to what it was.
133.3
I spent most of that year of recovery searching for similar cases online, because at this stage, the doctors weren’t sounding too hopeful. I compiled my medical history into a four-page Word document and sent it to the best doctors I could find in their field abroad. One day, a reply from a craniofacial plastic surgeon called Dr. Edward J. Caterson, working in the face transplant programme at Brigham and Women’s Hospital in Boston, offered me a video consultation, explaining he saw cases like mine often and was willing to help. In the space of 30 minutes, using a 3D model like this, he explained that I needed a zygomatic osteotomy and to avoid foreign objects as much as possible.
173.3
And once that was done, I would need basic plastic surgery touch ups. He further explained it was important to have the framework right before attempting to correct any soft tissue deficits. I then visited as many maxillofacial and craniofacial surgeons I could find back home in Johannesburg, until I found a maxillofacial professor a few kilometres away who mimicked Dr. Caterson’s advice. One of the most important things that empowered me during my journey was understanding what antibiotic resistance was. Even though I had accumulated much of that information on the internet, the maxillofacial professor in Johannesburg had taken the time to explain to me how bacteria could evolve resistance.
213
So for example, why I had to take antibiotics at equal intervals and not miss a dose or double dose. Patients take this sort of information for granted, because we don’t understand how antibiotics work. I was also totally naive to issues like why infection control both in and out of hospital was so critical to me beating MRSA. Alcohol spray in my bag and stringent sanitary practises became second nature to me after I understood drug resistance better, as did touching the infection on my face, even if it itched - which let me tell you, when I had the allergy to Chloramex it felt like an army of ants causing all my skin.
249.2
My doctors were only there to look after me and offered guidance a few minutes every week or less, so it was critical that I learned how to manage my infection alone. Drug resistant bacteria are very real, and the more pressure we put on them by using antibiotics incorrectly or unnecessarily, the more they will evolve as nature intended them to. This isn’t a problem only patients like me have after surgery– it’s a problem for everyone, because those dangerous resistant bacteria can be passed on between us through skin-to-skin contact, on objects, in the environment, in our food, and from our animals.
283.8
I was fortunate some antibiotics still worked on my bacterial infection, but there are many patients who can’t rely on last-resort antibiotics, and in those cases, they can die. There are no new antibiotics on the way either, so it really is a life-and-death situation that we use the time we have now to slow resistance down by working together. A few years ago, I was oblivious to the risks of antibiotic resistance, but today I champion stewardship globally as a patient advocate, making it my responsibility to learn, so I can participate as well as share my knowledge with others. I encourage you to champion antibiotic stewardship across the dental profession, too, so that we can protect these precious medicines.

As antibiotics become increasingly ineffective due to the development and spread of resistant infections, even minor surgeries and routine operations could become high-risk procedures, leading to prolonged illnesses and increased mortality.

Without effective antibiotics, the success of modern medicine such as cancer chemotherapy or major surgery will be compromised. 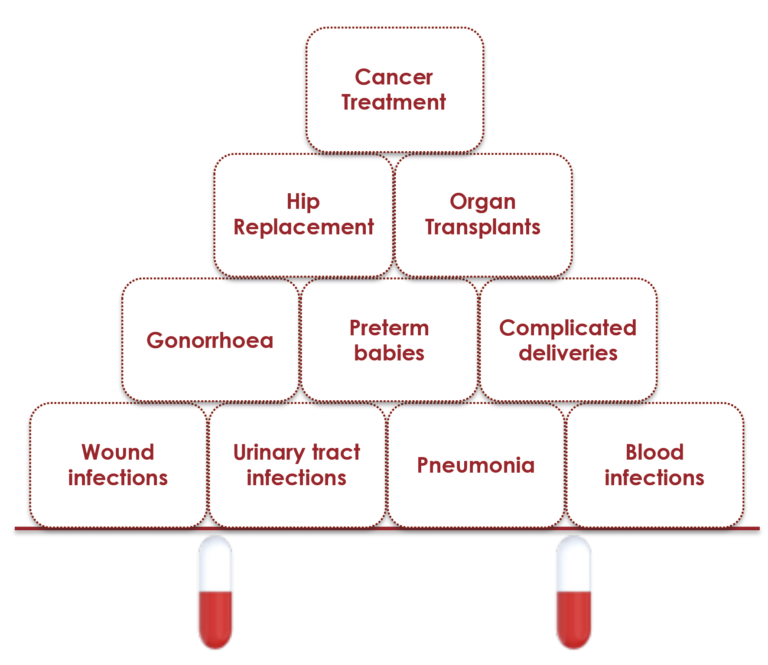 The antibiotic pyramid shows how many types of diseases and surgical procedures often rely on effective antibiotics. Image sourced from ReAct Group.

Antibiotic resistance is global and growing rapidly due to widespread misuse of antibiotics, putting patients at risk of ‘superbugs’ that are difficult (and sometimes impossible) to treat.

Some countries have reported that more than 42% of infections are resistant to common therapies. Life-threatening infections caused by Klebsiella pneumoniae that are resistant to the last resort treatment, carbapenems, have already spread worldwide.

As resistance continues to increase, it has been estimated that by 2050 infections resistant to drugs will be the number one cause of death globally, with 10 million people dying every year. 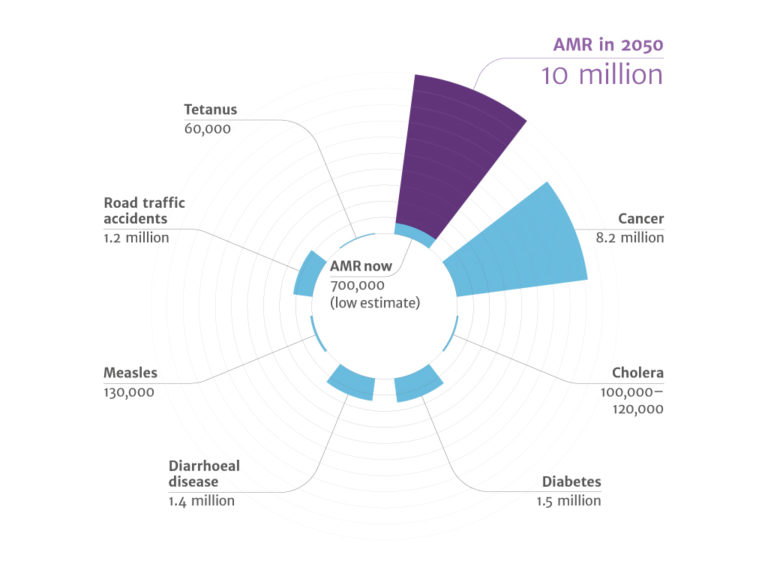 Image sourced from the ‘Review on Antimicrobial Resistance’.

Both the United Nations’ sustainable development agenda and the World Bank have highlighted the potential annual economic impact of antimicrobial resistance (AMR) — up to 3.4 trillion USD per year.

Antibiotic resistance is so serious that it has been compared to the risk posed by climate change and global terrorism. With little prospect of new classes of antibiotics being developed (at least in the short term), a ‘post-antibiotic’ era is anticipated, in which effective antibiotics are no longer available for large populations.

Engaging with these headline figures is hard; the scale of the impact is too large for us to feel a sense of personal jeopardy. Behind the headlines, however, are personal stories of lives changed forever. Surviving an infection that is resistant to antibiotics can be traumatic.