Carlos is now 25. As Carlos transitioned from the young person’s clinic to the adult diabetes clinic, he was offered a choice of how he wished to use insulin as an adult.

The treatment regimen choices were to either inject a mixed insulin twice daily, or to use two different insulins each day.

He asked for information on each regimen.

Injecting insulin twice daily would mean administering mixed insulin with breakfast and the same type of mixed insulin before his evening meal.

With a mixture, the fast component of the mixture would cover blood glucose levels over breakfast and evening meals, whilst the slower component would provide glucose cover between meal times.

Though only two injections, Carlos would have to eat at a similar time each day and ensure that his meal content was fairly consistent. 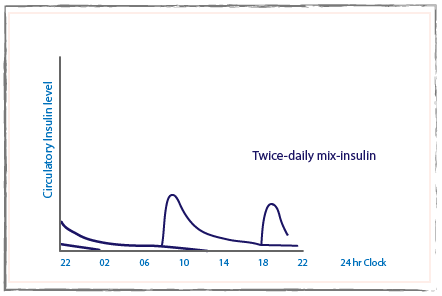 There would be the need to inject a long acting insulin once daily, at a similar time each day, to provide constant ‘background’ cover for blood glucose levels.

To cover the spikes in blood glucose following a glucose containing meal, a rapid or fast acting insulin is administered before a meal. The timings of the meals can be varied, as long as the insulin is given just before in all cases.

This method of delivering insulin known as the basal-bolus regimen and is close to the normal physiological release of insulin in response to glucose from a meal. 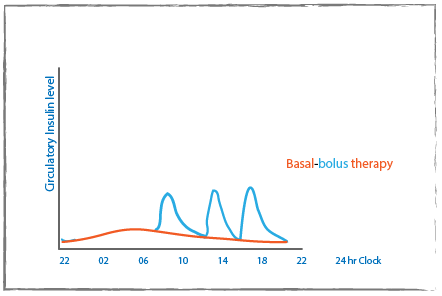 As Carlos works shifts, and his mealtimes vary from day to day, what do you think he might do? What other considerations do you think Carlos might take into account when making his decision about which insulin treatment option to go for?