This article discusses 6 physical barriers to insulin effectiveness, which is why a number of checks should be made before administering.
© University of Southampton

If someone using insulin reported persistent high blood glucose levels when they tested it, it would be very easy to simply increase the insulin dose. Before this is done, a number of ‘physical’ checks should be made.

It is important to ensure that insulin vials and cartridges are kept out of direct sunlight, as this can damage the insulin and make it less effective. It is also essential that the insulin being used is not out of date.

Did you know? As a rule, insulin that is actively being used should be kept at room temperature, as this can also help reduce the discomfort from administering the injection. It will remain stable and active for at least 28 days at room temperature.

View Course
Insulin that is not being currently used should be stored in a refrigerator.

The device used to inject insulin should also be checked to ensure that it is able to deliver insulin properly. Sometimes, insulin pens can become jammed or insulin cartridges can crack and leak, both resulting in reduced insulin delivery.
The insulin needle used should be of the appropriate size (usually 4-6mm) and should also be changed after each use and disposed of safely in an appropriate disposal bin. Repeated use of the same needle can make insulin delivery less effective, as the needle becomes bent, blunt and can make injecting painful. 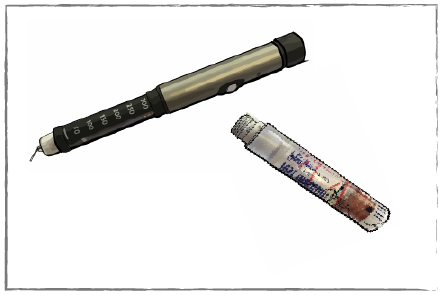 Figure: a bent insulin needle and a cracked insulin cartridge

Repeated injection of insulin into the same injection site can cause lumps to form in the skin. This ‘lipohypertrophy’ occurs as a result of the local anabolic effect of insulin on subcutaneous fat, which makes it grow more, usually appearing as lumps. 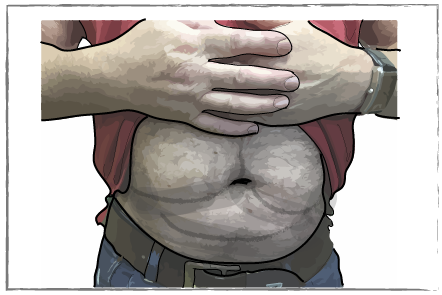 Figure: a patient with lipohypertrophy
They can make it more difficult for injected insulin to be absorbed.
Injection sites should be inspected and rotated regularly. Insulin should also not be injected into oedematous (fluid-filled) areas as this can be a barrier to subcutaneous absorption into blood vessels.

Did you know? It has also been noticed that injection of insulin through a layer of clothing can be associated with local bruising.

It is particularly important that mixed insulin is gently agitated for at least 30 seconds prior to injection. Vigorous shaking may damage the insulin.
The correct insulin should also be given at the correct time. For example, rapid-acting insulin should be given at mealtime, whereas long-acting insulin given with a meal will not lower blood glucose levels promptly.
The injection needle should be held in place for at least 10 seconds during and after injection, to ensure all insulin is delivered effectively.

Heat can increase the circulation of subcutaneous blood close to the skin surface, in an attempt to cool the body by sweating. As a result, insulin injected when an individual has a body temperature higher than usual may result in more rapid insulin absorption. Conversely, cold can delay insulin absorption, by reducing subcutaneous circulation, causing vasoconstriction and the subsequent rate of insulin absorption.
People who are travelling to warmer or colder countries should be made aware of this.

Some patients have visual problems, poor hand-eye coordination, cognitive problems (e.g. dementia) or manual dexterity related problems, that can make it difficult to self administer insulin.
If you’d like to learn more about insulin, check out the full online course from the University of Southhampton, below.
© University of Southampton