Battle of Waterloo: The Hundred Days

This article describes how Napoleon quickly gathered support, restored his imperial government and assembled an army. 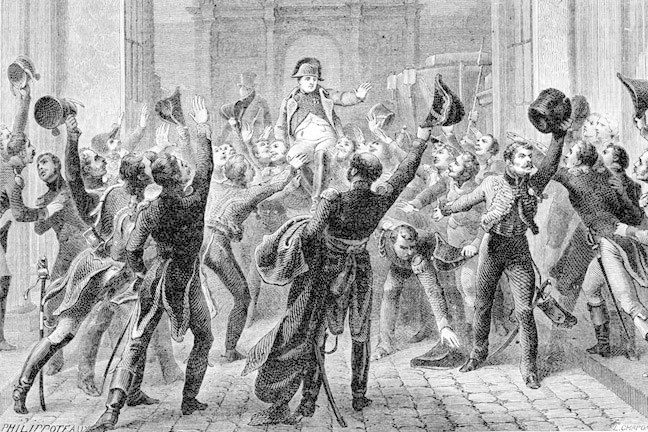 Napoleon’s progress through France was rapid and seemingly effortless. His charisma and the connection which many of his former soldiers felt for him was sufficient to persuade them to support him. Even Marshal Ney, who had sworn an oath of allegiance to Louis XVIII, proved that he was not immune to his former commander’s charms and, instead of arresting Napoleon, switched sides. His progress north became a series of triumphal entries into towns and cities, acquiring ever increasing forces. In the activity linked to this step we will consider an official newspaper account of one of Napoleon’s rousing speeches.

By 9 March, when he reached Lyons to find it had risen against the Bourbons, his supporters had grown to some 12,000. What began as a coup de main with a force of some 1,000 men landing in the south of France, resulted in the triumphal return of Napoleon to Paris on 20 March and the overthrow of the system of government that had been established in 1814. How did Napoleon manage to achieve this and in such a short timescale?

Support for the Bourbons had never been strong, and the rule of Louis XVIII did more to alienate rather than gather supporters to his cause. There was unrest and discontent in France, of which Napoleon had been aware and which he exploited to draw the populace to his cause. With Napoleon’s reappearance in France, support for Louis XVIII evaporated. The king was forced to flee Paris in advance of Napoleon’s arrival when he could not muster sufficient forces to defend the city.

How does Napoleon gather support across France?
Napoleon made effective use of communications, of speeches and proclamations, to gather together support and ensured that this information was disseminated as widely as possible through the telegraph system — there had been a network of thousands of kilometres of a telegraph, covering the principal routes of the French empire. By 16 March, a proclamation that he had issued at Lyons had reached most parts of France. He appealed to a sense of grievance and discontent in France, and he endeavoured to incite revolutionary fervour, using the language of anti-privilege and presenting himself as the saviour of France from the return of the ancien régime. At Lyons, Napoleon declared:

‘I wish to be less the sovereign of France and more the first of her citizens. I am a product of the Revolution … [and] have come to free the French people from the enslavement in which the priests and nobles wanted to entrap them … I shall hang the lot of them.’

Soldiers, I have just seen the news that the tricolour flies over Toulouse, Montpellier and throughout the Midi. The commanders of the garrisons at Perpignan and Bayonne have formally announced that they will not obey in any way orders given by the Duc d’Angoulême to deliver those towns to the Spanish who, besides, have let it be known that they do not wish to become involved in our business. The white flag [that of the royalists, of Louis XVIII] continues to fly only at Marseilles. But before the end of this week the people of that great city, oppressed by the violent acts of the royalists, will have regained their rightful place. Such great and prompt results are due to the patriotism that animates the whole nation and the memories of me that you have kept. If, for a year, adversity has obliged us to forsake the tricoloured cocade, it has always been in our hearts. Today it will become our emblem again, a sign that we have returned; we will not give it up except with our lives.
[The Emperor was interrupted by these words, repeated by all — Yes, we swear it.]
Soldiers, continued the Emperor, we do not wish to interfere in the business of other nations; but may misfortune come to those who wish to interfere in ours, to treat us as Genoa or Geneva and impose on us laws other than those the nation wants. They will find on our borders the heroes of Marengo, of Austerlitz, of Jena; they will find there the whole people, and if they have 600,000 men, we will oppose them with 2,000,000.
[Loud acclamations again interrupted the Emperor.]
I am greatly pleased, he added, at what you have done to rally round the tricolour. I will give you again these eagles — which have so often reflected the lustre of our valour and which have seen us put to flight the enemies of France — on the Champs de Mai and in the presence of the nation assembled.
Soldiers, the French people and I are counting on you; count also on the people and on me.

An outburst of the greatest enthusiasm followed this speech and the review was concluded.