Find out more
Home / Healthcare & Medicine / Improving the Health of Women, Children and Adolescents: from Evidence to Action / Beyond newborn survival

Read about the recent focus on improving child development after a child survives. 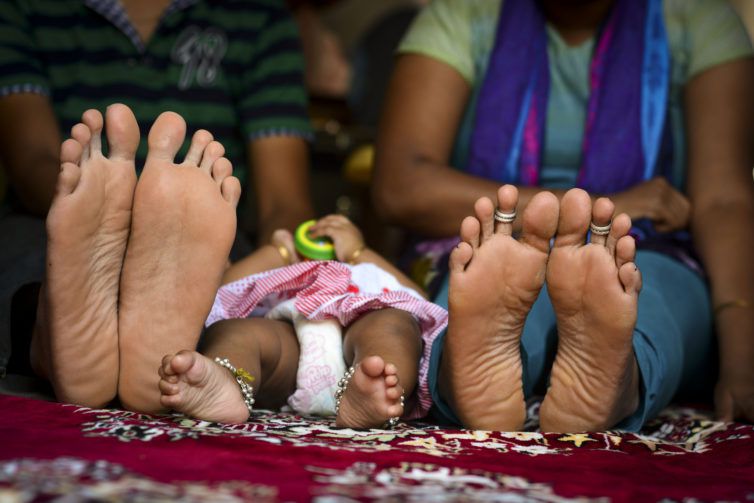 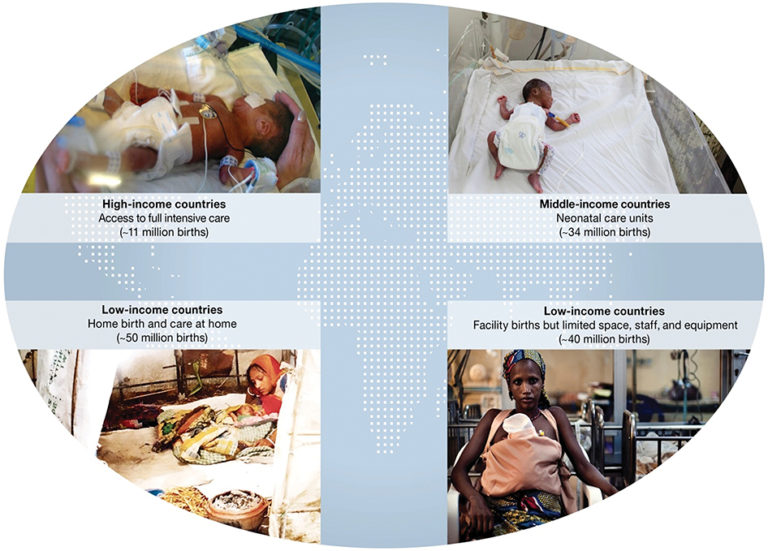 11 million babies are born in high-income countries where intensive care is almost universally available, and stillbirth and neonatal mortality rates are very low (less than 5 per 1,000 births), despite attempts to rescue even extremely preterm newborns. Survival is now at 80% for those born at 25 weeks gestational age, with disability risk very low for infants born beyond this threshold.2 However, the risk of death and disability varies within and between high-income countries.

There are 34 million babies born in middle-income countries, with the majority in hospitals. Access to intensive care is not universal, and there is less assurance for quality of care through detailed protocols, e.g. safe oxygen use. Although neonatal mortality rates have dramatically reduced in many middle-income countries, with more than 50 countries halving their neonatal mortality rates in the past 2 decades,3 disability rates have increased during the same time period, including in moderately preterm babies with preventable disabilities.2;4

In low-income countries 40 million births now happen in facilities, and there has been a big shift towards facility births. Yet for both women and their babies the gap for quality of care, both effective and respectful, is critical. Disability outcomes are a clear marker of low quality care and are more obvious to society than a stillbirth or neonatal death. 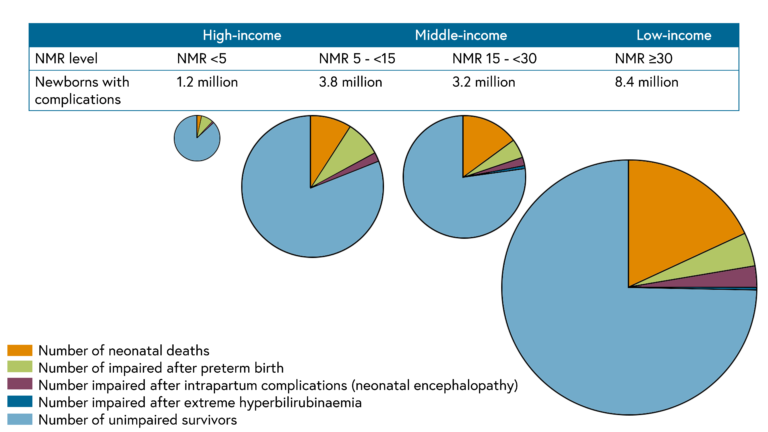 These disabilities differ by country. In high-income countries disability is especially driven by neonatal intensive care for extremely preterm (under 25 weeks gestation) babies, although disability-free survival has improved over the last two decades. Yet even for these infants, the disability free survival has improved over the last two decades.8 In middle-income countries the most common disabilities are in moderately preterm babies and should be preventable with improved quality of care. Urgent attention is needed to test and invest in simplified systems to track these babies and prevent or care for disability.

Estimates are constrained by the data available, but we are now seeing the best attempt yet to combine all available data and map the size of the problem of neonatal morbidity. Current estimates are likely to underestimate the true global burden of the range of impairments and disabilities attributable to neonatal conditions because not all outcomes were covered, e.g. behavioural conditions. Data gaps are greatest in the poorest countries and worst for conditions that are now rare in rich countries, such as intrapartum complications and neonatal infections. This is in contrast with preterm birth which is more common, notably in the United States. Shockingly, there are almost no national data on neonatal hyperbilirubinemia except from Denmark and Canada, forcing the use of historical data from more than half a century ago.6 Improved estimates will require better data from the poorest countries, counting birth and development outcomes and using consistent definitions.

Better data and better use of existing data is fundamental. Countries, especially middle-income countries with growing intensive care services, urgently need to improve quality of care and the quality of follow-up data on child development, developing services for those with impairment.9 Neonatal conditions result in social and economic loss to families and nations. Investing in care of women and newborns will reduce both deaths and disabilities, but additionally help us move towards improving child development outcomes.

The Global Burden of Disease estimates that of all global disability-adjusted life years in 2010, almost 1 in 10 was due to neonatal conditions. Of this, 95% were estimated to be due to neonatal deaths rather than subsequent disability.10 This burden is more than three times that of HIV, more than all cancers, similar to all cardiovascular conditions, and is still barely mentioned in global health agendas. Reducing neonatal deaths is increasingly recognised as a public health priority largely because of the impact these deaths have on MDG4.8 Now, with almost half of all under-five deaths occurring in the first month of life (the neonatal period), reducing neonatal deaths is rising to the top of the child survival agenda.

Yet as the focus shifts beyond 2015 to the post-MDG era, more recognition is being given to disability-free survival, human capital, and wider sustainable development.11 Although neonatal deaths are just beginning to receive attention,12 neonatal morbidity and its long-term impacts have, to date, received almost no attention in many settings and are increasingly important issues for individuals, families, and nations.