Find out more
Home What languages are spoken in the Philippines?
Published on July 11th, 2022 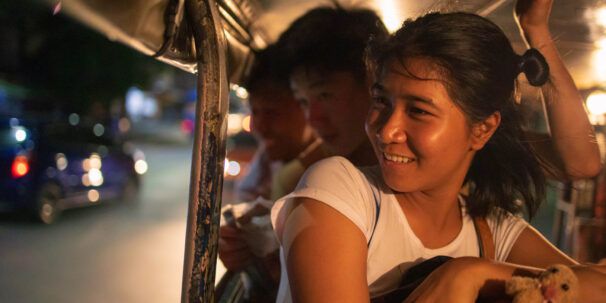 The Philippines is made up of 7,641 islands, which has given rise to a vast number of languages. The Philippines currently has 183 live languages, the vast majority of which are indigenous or regional.

Any two random people in the Philippines have an 80% probability of growing up speaking a different language, making the Philippines one of the world’s most linguistically diverse countries. In fact, the Philippines celebrates its linguistic diversity for an entire month in August (known as Buwan ng Wika, or Language Month). Some of the most in-demand languages are spoken in The Philippines.

If you’re looking to learn a new language you may well find some inspiration here!

Is Spanish spoken in the Philippines?

From 1565, the Philippines were under Spanish colonial administration for 300 years; Spanish was the official language during that time. According to the 1935 Constitution, Spanish was reinstated as an official language alongside English, but it was relegated to an “optional and voluntary language” in 1987.

Although just approximately 0.5 percent of the Philippines’ 100 million people speak Spanish, it still has the highest concentration of Spanish speakers in Asia.

However, the roots of Spanish have not totally left the Philippines, as a third of the Filipino language is made up of 4,000 “loan words” derived from Spanish words. This heritage is clear from the start, as the word “hello” (kumusta) is derived from the Spanish phrase “how are you?” (cómo está).

Official languages of the Philippines

Filipino and English are the Philippines’ two official languages. Filipino is a native language based on Tagalog; English has official status due to the Philippines being a colony of the United States between 1898 and 1946.

Schools and the media largely use Filipino; it is the lingua franca that binds the country’s various linguistic communities together. English is widely used in government, newspapers, and publications.

Tagalog is a member of the Austronesian language family’s Central Philippine branch and serves as the foundation for the Filipino language, the Philippines’ national language. Cebuano, Hiligaynon (Ilonggo), and the Bisayan (Visayan) languages are closely related to Tagalog. About 14 million native Tagalog speakers live in central Luzon and parts of Mindanao, making them the Philippines’ second biggest language and cultural community.

Another 25 million people use Filipino (a Tagalog-based language), which is increasingly used in literature, radio, and the press, as well as in government and education. Tagalog grammar is known for its complicated verbal system, which includes three forms of passive phrases.

Are Filipino and Tagalog the same?

The Filipino language is similar to Tagalog – but not exactly the same. Filipino is a modernised variant of Tagalog that incorporates aspects of other Philippine languages as well as Spanish, English, Chinese and Malay, but the two are mutually intelligible and the names are often used interchangeably.

Tagalog became the Philippines’ national language in 1937, when Congress decided to include a native language among the officially recognised languages. Tagalog was the most widely used language in Manila at the time, making it an obvious choice in the eyes of Congress – though the decision is still seen as controversial by Cebuanos, who make up a larger proportion of the population than Tagalogs.

When the Constitution was changed in 1973 under dictator President Ferdinand Marcos, Tagalog was renamed Filipino, and Congress began to develop a new version of the language. In 1987, Filipino was granted official language status.

Marcos’ efforts to build a “new civilization” included the transition of Tagalog into the Filipino language. Part of this effort involved adding features from other languages, such as replacing supposedly “aesthetically unpleasing” Tagalog terms with replacement words that sounded better. The alphabet was changed to include the letters c, f, j, x and z, and certain words’ spellings were modified to better represent their pronunciation.

Since the Americans colonised the Philippines, English has been the primary medium of instruction in schools and institutions. Since then, teaching of the English language has improved as Filipinos have recognised the need to learn English in order to engage with Westerners for commercial and tourism purposes.

The Philippines has a worldwide reputation for English fluency, with the majority of its inhabitants speaking the language at some level. English has always been one of the Philippines’ official languages, and more than 14 million Filipinos speak it. It is the principal medium of instruction in education, as well as the language of trade and law.

English language proficiency is an asset to the country that has boosted the economy and even helped the Philippines surpass India as the top call centre destination in the world in 2012. Due to the relatively more affordable but high-quality English as a Second Language (ESL) programmes available locally, the number of foreign English learners is on the rise.

Learning English as a second language in the Philippines

There are multiple options available to aspiring English learners in the Philippines, whether they want to take an in-person course or learn online.

Learn English with an in-person course in the Philippines

An ESL (English as a Second Language) student can benefit from a structured, in-person study setting in a variety of destinations across the country. The following are the most popular:

Learn English in the Philippines with online courses

You can also study English online with FutureLearn’s range of courses. We have courses on everything from basic English comprehension to academic English. The following are two of the most popular courses:

Prepare for IELTS with the British Council

You may need to take the IELTS test to verify your English language skills if you want to study, work, or live in another country. IELTS is one of the most popular English tests in the world, with over 10,000 organisations worldwide accepting it.

The four courses in this British Council ExpertTrack – speaking, listening, reading, and writing – will provide you with all the information and practise you need to confidently approach all four areas of the IELTS and get the band score you desire.

This ExpertTrack will help anyone studying for the IELTS. The four courses offer full preparation for the four components of the IELTS test. While the emphasis is on IELTS Academic for study, the suggestions, guidance, and strategy are also applicable to individuals preparing for the General Training test.

Develop English skills for the workplace with the British Council

This course is for non-native English learners who have attained at least a pre-intermediate level of English (approximately A2 on the CEFR). Those looking to improve their business English will find new words and phrases to use in the office.

This course is for people who are studying English and want to improve their English language abilities for work and job interviews. It will assist job seekers and young professionals in learning English.

Other major languages in the Philippines

The Cebuano language, also known as Bisaya or Sugbuhanon, is a member of the Austronesian language family’s Western, or Indonesian, branch. Around 18.5 million people in the Philippines speak the Bisaya language; its speakers can be found in eastern Cebu, Negros, western Leyte, the Camotes Islands, Bohol, and the northern and western coasts of Mindanao.

Cebuano shares many similarities with the Hiligaynon (Ilonggo) and Waray-Waray languages, and it is frequently classed with them as a Visayan (Bisayan) dialect.

Cebuano speakers make up nearly a fifth of the Philippine population and are the country’s second largest ethnolinguistic group. Despite its widespread use, Cebuano is rarely employed as a literary language, however, it is used in newspapers and cinema.

Ilocano – often spelled Ilokano or Ilokan and also known as Iloco – is the Philippines’ third most-spoken native language. With the arrival of the Spanish in the 16th century, the Ilocano settled in the Ilocos region, a short coastal plain in northwestern Luzon. As the population grew, they migrated to neighbouring provinces, the southern Philippine island of Mindanao, and Hawaii.

The Ilocanolanguage is closely connected to those spoken in northern Luzon and is part of the Austronesian language family. There are around 10 million Ilocano speakers in total. Ilocos Norte, Ilocos Sur and La Union, the three largest Ilocano provinces, are among the Philippines’ most densely populated places.

Hiligaynon, also known as Ilonggo, Binisaya or Inilonggo, is spoken by around 9.1 million people in the Philippines, primarily in Western Visayas and Soccsksargen. The majority of Hiligaynon speakers originate from the Hiligaynon ethnic group.

The Hiligaynon language belongs to the Bisayan language family and is more distantly linked to other Philippine languages. After Cebuano, Hiligaynon is the second most spoken language in the Visayas.

The Hiligaynon language is primarily found in the Western Visayas – in Iloilo, Guimaras, Negros Occidental and Capiz – as well as in Soccsksargen’s South Cotabato, Sultan Kudarat, and North Cotabato.

Immigrant languages in the Philippines

Endangered languages in the Philippines

The Philippines contains a diverse range of languages that are disappearing faster than they can be effectively documented. According to the language database Ethnologue, there are now 28 endangered Philippine languages, compared with 13 in 2016. There are eleven languages threatened with extinction, with several already extinct.

Even major Philippine languages, such as Kapampangan, Pangasinan, Bikol, and Ilokano, are in decline, with some languages disappearing faster than others. Medium-sized languages such as Ibanag, Itawis, and Sambal are experiencing a similar trend. The number of speakers as well as the frequency and situations in which these languages are spoken is in decline.

Local languages are still spoken in family gatherings, sari-sari stores, and barangay halls, but they are not generally spoken in public venues such as parks, banks, restaurants and schools.

Passengers have been said to speak in their own tongues until the bus reaches the main city, at which point they switch to Tagalog.

The Philippines is a fantastically diverse nation – the same applies to its languages. However, the unofficial and indigenous languages are in danger of extinction if more isn’t done to protect them. The Philippines could benefit from government legislation to grant more languages official status and ensure that they are documented.