Find out more
Home / Nature & Environment / Food Tech / From Waste to Value: How to Tackle Food Waste / The food use hierarchy

The food use hierarchy

Article on the food use hierarchy which ranks the various strategies for managing food waste.
© EIT Food

As you’ve seen, food waste results in the loss, not only of the food itself but of all the resources that went into creating it such as land, water, labour, energy, fuel, packaging, etc. And when food waste goes to landfill it releases greenhouse gases (GHGs) – mainly methane, which is 23 times more potent than carbon dioxide [1].

Many organisations involved in efforts to address food loss and waste (FLW) have developed ‘management hierarchies’ that rank various strategies for managing it. They are often referred to as ‘waste management’, ‘food recovery’, or ‘food use’ hierarchies, and are usually presented diagrammatically in the form of an inverted pyramid, such as the one below. These hierarchies provide useful guidelines for national and regional governments, food manufacturers, grocery retailers, growers and consumers in deciding how to prevent and manage food waste.

The food waste hierarchy focuses on delivering the best environmental option for dealing with waste. ‘Prevention’ is therefore at the top of the inverted pyramid as the best option and at the bottom the least good option is ‘disposal’. The principle of the framework is to keep food products at the highest tier possible, redefining waste as a potential resource rather than as an unwanted burden.

However, there is growing international consensus that a food use hierarchy is needed to shift the focus towards reusing food, first for human consumption and second as animal feed, keeping food in the food chain for as long as possible. The best option is, again, ‘prevention’ with a focus on reducing waste at source. This is followed by diverting surplus to human consumption or livestock feed. If that can’t be achieved, anaerobic digestion (to produce biogas) is preferable to composting in terms of recycling. And an incineration step for waste recovery is preferable to disposal. 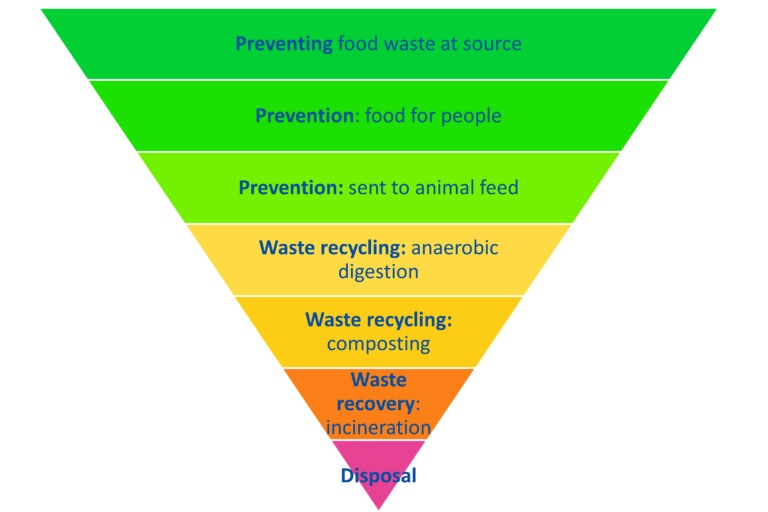 The seven tiers are grouped into three treatment categories:

The seven tiers can also be grouped into five categories of actions:

Waste prevention at source – optimising planning to reduce surplus food and provide only what we need, and improving processing/operational efficiencies.

Waste prevention through reuse – redistributing or finding alternative uses within the food or feed chain. Supermarkets and wholesalers may donate mislabelled or damaged packaged foods, overstocks, test-market products, and short-dated foods to people in need through food banks and other charities.

Food that’s not edible for humans should be used as animal feed when it’s safe to do so. It’s important to note however that leftovers or food scraps that contain or have come into contact with meat or meat products are banned from being reused as animal feed. Many viruses can survive for extended periods in meat and can cause severe diseases in livestock such as foot-and-mouth disease and swine fever. In recent years there’s been research and campaigns that support the claim that it’s safe to feed pigs and chickens with treated leftovers containing meat, however legislation remains unchanged.

Extracting energy by incinerating a mixed waste stream consisting of food waste and other municipal wastes (a mass-burn). This produces energy in the form of electricity, heat or both.

Disposal of food waste without extracting any value is the lowest tier in the food use hierarchy. This includes waste incinerated without energy recovery, waste sent to landfill and waste products entering the sewerage system. Traditional landfill sites have caused serious public health issues in the past and have had detrimental environmental impacts including air pollution, methane emissions, and water pollution.

Towards a more sustainable food system

The food use hierarchy is a key set of principles to follow in developing a more sustainable food system. A future-proof food system will also address how to use fewer resources in the production of our food in the first place. And food that was previously seen as waste will be seen to have value and used as a resource to feed back into the food system. You’ll find out more about this concept, known as the circular economy, in the next Step.

How can we apply the hierarchy in our everyday life?

The first priority is to prevent waste. Food suitable for human consumption should be shared with people to make the best use of all the resources invested in that food.

The next priority is to recycle:

Minimise the food you dispose of. When waste cannot be prevented, recycled or recovered, it goes to landfill. This has high costs and contributes to GHG emissions, soil depletion and pollution.

Following these simple steps to avoid food waste WILL make a difference and contribute to fighting climate change. Over the course, we’ll be providing tips and practical strategies to help you do this.

Would you be willing to apply these principles in your everyday life and inspire others to do so too?