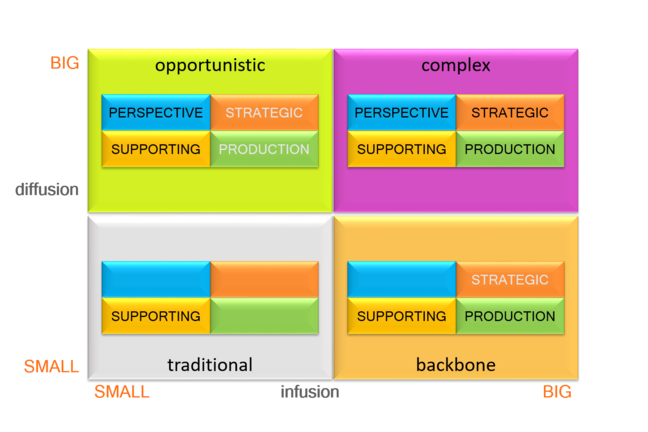 The role of IS/ICT in organisations

IS/ICT can play different roles in organisations. Below I discuss some of the typologies that may help us make sense of these roles. Of course, we will not forget that the categories are not in reality, they are just tools helping us to make sense of reality.

The first typology I like to call the ‘levels of IS’; most authors call them ‘eras’. In my view, they are not eras, as the higher level always completely includes the lower level and would not work without it. However, as there is a timeline on which we can indicate when the different levels appeared, I understand why someone would want to call them eras. The first level is called electronic data processing (EDP) and it started in the early 1960s. The aim of EDP was (and still is) to improve of the operational efficiency by automating the information-intensive processes. At the time, it was primarily supporting the accounting and logistics, while the production was mainly supported by databases without much processing. Once the information processes that could be automated were automated, the focus started to shift to how to help the managers. This second level is called the management information system (MIS), which started in the late 1970s, and its aim was to improve the managerial effectiveness by satisfying their information needs. Of course, this could only be achieved if one had an EDP that was working well. There were some isolated MIS cases which were working well towards the end of the 1980s and so those who were speculating about the role of IS in organisations came up with the notion of strategic information systems (SIS). Supposedly the role of the SIS would be to improve the competitiveness of the organisation by redesigning features and/or processes of activities. Although this idea is 30 years old now, there are still only some applications that would qualify as SIS, and there is still much to be desired of those. In short, I have never seen a full-blown well-working SIS, although since the second half of the 1990s we have many examples of well working MIS. Maybe the idea of SIS is not conceptualised very well, maybe it takes a long time to deliver what is expected – probably a bit of both. In any case, I do not believe that these would be any sort of automated systems; I think it needs to involve computers as well as humans.

The next typology that I have found useful is called the environmental portfolio of IS. It can be organised around the concepts of infusion and diffusion. Infusion refers to the dependence of the organisation on IS; diffusion indicates the level of decentralisation of IS. Traditional IS environments would be characterised by low infusion and low diffusion; so you could do the work without it, it is highly centralised yet we are used to it. A Backbone IS environment has high infusion and low diffusion, i.e. a highly centralised context essential for the primary processes of the organisation. An Opportunistic IS environment means allowing to play around with IS; it is characterised with low infusion and high diffusion. IS environments with high infusion and high diffusion are referred to as Complex and quite rightly so, as this would mean that we are highly dependent on something that we do not centralise. Of course the management complexity of such IS environments resides exactly in figuring out how far you can go with the diffusion and where you need to draw the line. Predominantly this happens in IS companies.

Another similar typology is the software portfolio. Here both dimensions considered are about the organisational goals; the first one is the dependence on IS of achieving the current goals; and the second is the potential contribution of IS to achieving our future goals. Where both are low, we talk about supporting applications; they are necessary but not critical for success. The office packages, email and calendar would be examples of the point. If achieving the present goals highly depends on the IS and it does not contribute too much to our future goals, we talk about production systems. This means that IS is usually deeply embedded in our primary processes. In manufacturing companies the IS running the automated parts of the production would belong here, for a carrier it would be a logistics software. Perspective applications may have the potential to contribute significantly to achieving our future goals but they have little to do with our current goals. This is something that someone has discovered within a department and they are allowed to explore it on their own to see whether it is useful for something. Finally, we may have applications that are crucial for both out present and future success; these we call strategic applications. This usually means that we are heavily invested in such application. For many organisations the ERP applications belong here.

Often you can bring together various typologies to make even better sense of where you are. For instance, we can put the software portfolio into the boxes of the environmental portfolio and look at what sort of applications can work in which types of environments. You can see this on the picture at the top of the page. A traditional environment is only appropriate for a supporting IS. An opportunistic environment can be right for supporting and perspective applications and in some cases the production and strategic may survive as well but it is quite risky for them. The backbone environment is excellent for the supporting and production applications, the strategic may exist but not flourish and the perspective cannot exist. A complex environment can be viable for any application category as long as you can meet the challenges of managing the complexity.