Find out more
Home What are the fastest growing industries in Australia?
Published on August 27th, 2020

Discover the current fastest growing industries in Australia. These sectors will provide you with some of the best paying jobs in Australia – but what new skills and qualifications will you need? 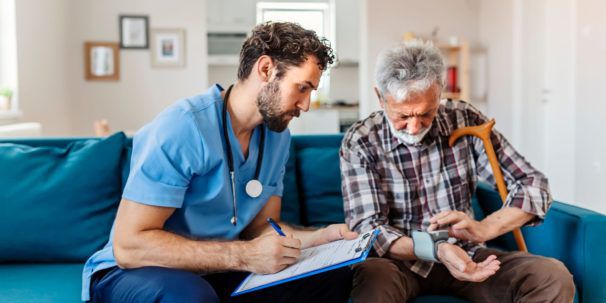 The race for a high paying job in Australia is on. If you want to earn the average income of just under $80,000 per year, you may need to upskill – and you should probably know what the fastest growing industries in Australia are. Choosing one of the strongest industries that is predicted to keep growing can afford you a higher wage and long-term job security.

We decided to investigate for you what those industries are, why they remain strong and what skills you will need to get into related jobs.

Why work in a growing industry?

How much do people earn in Australia?

Australians are known to enjoy higher employment income than other developed nations. One way to get a picture is to compare the minimum wage of Australia to other countries.

But most people in Australia are not working at this rate. This minimum wage is topped up by industry agreements, making the real minimum wage much higher even for newcomers to a job. This is topped up even further depending on experience, qualifications and other factors.

The Australian Bureau of Statistics found that the average weekly pay as of May 2020 was just over $1,700, meaning the average yearly income was just shy of $80,000. You should take these results with a pinch of salt, because don’t forget, the cost of living in Australia is significantly higher than other developed nations.

What is the average education level in Australia?

Australia doesn’t just enjoy higher wages but also one of the highest populations of university-educated residents. Over the last two decades, the percentage of Australian residents that have obtained at least a bachelor’s degree has tripled. In 1989, fewer than 8% of Australian residents boasted a degree, whereas in 2018 that number was over 27%.

There may be multiple reasons why Australians are choosing to take up university places more today, including:

What are the fastest growing industries in Australia?

Below you will find eight of Australia’s fastest-growing industries, along with reasons why they are getting bigger.

Healthcare remains one of the fastest-growing industries around the world and it has been supercharged by our ageing population. Statistics reveal that within three decades, 22% of people in Australia will be over 65 years old.

Although some people have focused on the fact that the ageing population appears to be levelling off, they usually forget that the overall population continues to increase. Ultimately, this means that the percentages may hover around the same mark but the actual number of older people requiring healthcare is still increasing.

The renewable energy and sustainable living industries are becoming a priority for most countries. From the UK to Australia, more is being invested in this area to preserve ecosystems and help the planet heal. The methods of achieving these goals are drastically different. Thus, there are so many diverse jobs within the renewable energy industry.

If you want to change careers and work in a job that matters, you could start by taking online courses on climate change and then specialise in specific areas like responsible food supply, solar power or even wind farming.

Along with the growing populations mentioned earlier, more Australians need homes and to build communities with schools, leisure centres and many other facilities. After all, from an economic perspective, Australia is a very young country compared to other nations. This creates a demand for more construction and engineering work to be done.

The good news is that there is a wealth of jobs that will become available from this flourishing sector, including architect, building and engineering jobs.

Public safety requires continual investment in any country. But to keep Australians safe, they need to invest heavily into ways to protect residents from a unique threat – bushfires.

As we all saw at the end of 2019 and the start of 2020, Australia suffered from mass blazes and bushfires that destroyed homes, businesses, wildlife and took human life. Consequently, Australia wants to step up its defence systems to protect communities from future bushfires. This means more engineers, better planning and new effective procedures being created.

If you want to understand more about bushfire strategy and work in this line of public safety, you can now do so with a dedicated and 100% free bushfires course from experts at the University of Newcastle, NSW.

Australia is on most people’s travel bucket list. From unspoiled white beaches and clear water to exciting cities and outback exploration, there is so much to see and do in Australia. This means the tourism industry is always booming and continues to grow year on year.

Despite a temporary hiatus after COVID and travel restrictions, the tourism industry is certain to expand once again. This means there are lots of Australian jobs in accommodation, tours (especially near the reefs!) and transport.

You can enrol to our culture and tourism course, to understand the main definitions and concepts of cultural tourism and progress in the sector that is meant to grow again.

The financial industry is growing due to an array of emerging technologies and modern ways of sending or receiving money, including blockchain development.

But one aspect of the industry that is really taking Australia by storm is the Buy-Now-Pay-Later business model. This is when businesses offer instant finance strategies for smaller purchases. One of the most popular right now is Afterpay, enabling consumers to pay later in much smaller instalments on anything from a new shirt to white goods.

Having a finance related qualification or one combined with business degrees should put you in good stead entering the finance job market of the future.

Cybersecurity is an industry that caters to every other industry. With almost every businesses owning a website and operating online, white hat hackers can provide a service to these companies to keep their customers safe and protect their brand.

If a business is hacked and data is stolen, that information quickly becomes public knowledge and can destroy brands, sometimes causing businesses to fail. The demand for cybersecurity experts is already big but expected to grow as more of our retailers and government departments rely on the internet.

Many cybersecurity workers have some form of computer science degree, but it is not a prerequisite. Some hackers earn jobs by self-teaching the required skills and taking short-term cybersecurity courses.

Australia includes vast amounts of land used for farming and growing crops. Many of the jobs in this industry are left to backpackers who come for short-term working holidays. But there have been a number of calls to stop the industry’s reliance on backpackers and to start creating more permanent jobs for full-time residents.

These efforts are being stepped up after COVID because there are no backpackers around to pick up the apple cart. Agriculture jobs go further than picking fruit to nurturing the land, caring for animals and even agriculture logistics and profitability.

If this sounds interesting to you, you’ll be pleased to hear that The University of Western Australia offers a free course on agriculture, economics and nature. Find out if your passion lies in agriculture now!

Why location is a key consideration?

One consideration when trying to identify the fastest growing industries in Australia is your location. Australia is huge with different climates, wildlife, ecology and more. Some parts of Australia are even uninhabitable.

What this tells us is the best industries may differ between states. For example, in Western Australia mining is still big business and offers some incredible paying jobs, whereas there are fewer mines on the east coast.

So, before picking an industry you want to get into, you may want to investigate how it is performing in certain parts of Australia – or ask yourself if you are prepared to move for your preferred job.

A brief look at the current Australian economy

Analysing economies just after the peak of COVID is difficult and not a true reflection of how that economy usually performs. Thankfully, Australia hasn’t experienced COVID in the same way that many European countries have, with fewer cases and deaths. But that doesn’t mean the Australian job market hasn’t suffered.

The Guardian recently reported that one million residents are now unemployed and full-time employment decreased by almost 300,000 people this year. Measuring up to other nations post the pandemic, this figure is much healthier in comparison. The key takeaway then is then that Australia industries may have suffered from the pandemic, but they remain stronger than others around the world.

Thinking about migrating to Australia for work?

This post was predominantly aimed at Australians already in Australia looking for work and wanting to upskill. But that doesn’t mean non-Australian residents can’t benefit from understanding what the hot jobs are down under.

Just be aware that if you are planning on migrating to Australia for working purposes, you will need to have a working visa. To get a working visa you must receive sponsorship from an Australian employer – and have worked in a job that matches a list of job shortages at the time of application.

This list of jobs that qualify is updated frequently with some professions always staying on it – such as doctors or nurses – while other jobs may fall off or come back on. You should also be aware that some foreign qualifications do not transfer to Australia and you may need an Australian degree or some type of bridging qualification to keep working in your current role when in Australia.

Upskill for the best Australian jobs with FutureLearn

Whether you’re searching for the best paying jobs in Australia from near or far, one way to prepare yourself is with qualifications and certificates provided by Australian universities and recognised by local employers.

Search our course database today to upskill with relevant qualifications that can earn you a promotion or new career in Australia!