Find out more
Home What is a Raspberry Pi and what can it be used for?
Published on July 19th, 2022 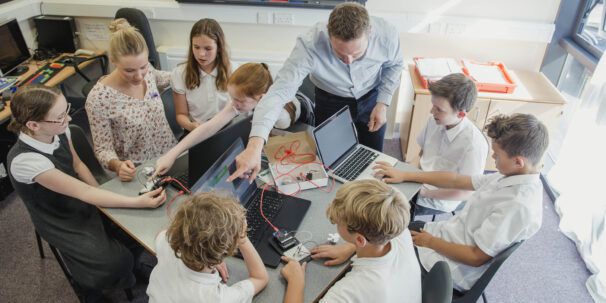 The Raspberry Pi has revolutionised the teaching of computing in schools. It’s simple, lightweight and affordable, meaning that it can easily be purchased in bulk for school projects. It’s not just for schools, though – the Raspberry Pi makes electronics and computing skills accessible to anyone who wants to learn them, regardless of age.

What is a Raspberry Pi?

The Raspberry Pi is a basic computer, barely larger than a credit card. Despite its unassuming appearance, it is surprisingly powerful and can be plugged into a standard monitor, keyboard and mouse just like any other computer. It can browse the internet, play high-resolution videos and even run games.

Due to its relative simplicity, the Raspberry Pi is mostly used in classrooms to teach children to program in languages such as Scratch and Python. However, it also has a cult following among adult hobbyists who explore its full capabilities through various Raspberry Pi projects. Both children and adults can use the Raspberry Pi to make useful technologies such as motion sensors, electronic music machines, weather stations and smart speakers.

What are the advantages of using a Raspberry Pi?

There are numerous reasons to consider using a Raspberry Pi for your digital technology projects or even as a replacement for your home computer. Here are just a few:

Because of its small size, the Raspberry Pi requires just 15W to operate – much less power than other computers. It’s also fan-free, so runs silently.

Raspberry Pi computers are cheap – the standard model retails from around $35. The most recent model is the Raspberry Pi 4 Model B, which comes with wireless internet, Ethernet and Bluetooth connectivity, up to 8GB of RAM and two micro-HDMI ports that can support two 4K monitors. It has two USB 2 ports and two USB 3 ports, which can transfer data up to ten times faster than USB 2. With all these features, it’s powerful enough to run multiple programs at once, just like a regular desktop computer.

There are plenty of accessories available

If you’re not sure what you need to buy, retailers such as The Pi Hut sell pre-packaged kits that contain all the Raspberry Pi accessories you need to get started. The Retro Gaming Kit, for instance, comes with two retro-style controllers and an aluminium cooling case. The official Raspberry Pi desktop kit comes with a Raspberry Pi 4 Model B, a keyboard, a mouse, a power supply, cables, an SD memory card, a case and a beginner’s manual for £120 – a fraction of the cost of a regular desktop computer.

The operating system is intuitive (and backwards-compatible)

What is the Raspberry Pi Pico?

The Raspberry Pi Pico is a microcontroller that costs just $4. It’s used to run physical computing projects (such as simple robotics projects), which makes it popular for use in the classroom. Unlike the fully-fledged Raspberry Pi, the Pico can’t be used as a computer as it has no USB or HDMI ports. You need to plug the Pico into another computer to program it. The Pico can be programmed using C or MicroPython, a version of Python optimised for use with microcontrollers.

The teaching possibilities for the Raspberry Pi Pico are practically endless.

A blog by the Raspberry Pi foundation described how a teacher in Liverpool introduced the Pico to his Women in Tech club for 11- to 12-year-olds. They started by using the Pico to make LEDs flash on a breadboard, which inspired the students to think of more complex applications. He observed that the Pico’s physical applications were more inspiring to the students than simply learning to code on a screen.

Another teacher in Hampshire used Picos at an after-school club for 13- to 15-year olds. After just six sessions, the students had used the Picos to build motorised buggies. Some students initially struggled with making the wheels turn – solving this problem gave them experience with troubleshooting and “debugging.”

At FutureLearn, we offer online computing courses through the Raspberry Pi Foundation, which are aimed at children and adults alike. Most focus on general computing skills, but a few focus specifically on Raspberry Pi applications – here are three of the best.

Get started with your Raspberry Pi

Getting Started with Raspberry Pi is designed for Raspberry Pi beginners – you don’t need any prior computing or coding experience. By the end of the course, you’ll fully understand what this powerful little computer is capable of – and you’ll possess sufficient knowledge to continue your Raspberry Pi journey. You’ll need a Raspberry Pi (ideally a Raspberry Pi 4) for this course, along with a keyboard, mouse, power supply, micro SD card, and a cable to connect your Raspberry Pi to a screen (in other words, all the components in the Raspberry Pi 4 desktop kit).

Over the course, you’ll cover the Raspberry Pi Operating System (Raspberry Pi OS), how to add and use software, how to connect hardware, and how to get started with coding. You’ll also learn how to control your Raspberry Pi remotely. You’ll be able to access the FutureLearn community and share your achievements and insights with other learners.

Build a robot with Raspberry Pi

Physical computing is one of the most exciting applications of the Raspberry Pi – you’ll experience it first-hand on the Build A Raspberry Pi Robot Buggy course, which utilises the Raspberry Pi’s practical potential to build a robot buggy. You’ll first connect motors to the Raspberry Pi, then use Python to write a program to get your buggy moving. You’ll then add sensors and write algorithms that will enable your robot to follow lines and avoid obstacles. The course will also encourage you to think about the wider effect of robotics on society.

You don’t need any experience with physical computing to take this course, though basic familiarity with Python – as taught in our Programming 101 course – is recommended. It is particularly suited to teachers who teach GCSE or equivalent, who wish to add engaging Raspberry Pi projects to their curriculum.

You’ll need a Raspberry Pi 3B, 3B+ or 4 for this course, along with compatible hardware and robot buggy parts. You can find the full list here.

Simple yet powerful, the Raspberry Pi is ideal for teaching physical computing to students. The Teaching Physical Computing with Raspberry Pi and Python course will get you up and running with the Raspberry Pi so that you can use it in your lessons.

You’ll learn how to capture data using input devices, process data using Python 3, and use output devices to extract that information from your computer. You’ll also cover the sequence, selection and iteration principles used in physical computing, and learn to make basic circuits to use in your projects. In the final week of the course, you’ll embark on your own physical computing project.

Although this course is designed for teachers delivering lessons at GCSE level or equivalent, it’s suitable for anyone who wishes to develop their knowledge of programming. You’ll need a Raspberry Pi computer, plus a selection of components to use in your projects – you’ll find the full list on the course page.

What is the Raspberry Pi Foundation?

The Raspberry Pi was created by the Raspberry Pi Foundation, a charitable organisation based in Cambridge, England. Their aim is to educate and empower young people through digital technologies and computing.

The Foundation’s vision is based around three principles:

In addition, the Foundation has three long-term goals:

Designed with accessibility in mind – both in terms of cost and simplicity – the Raspberry Pi is an excellent choice for anyone wishing to pick up coding or physical computing skills. Browse our full range of courses offered by the Raspberry Pi Foundation and start your educational journey today.