In this post Tess Cooper, Product Manager, discusses the hack day she ran to tackle Youth Unemployment, covering how the day unfolded, and what the results were.

In this post Tess Cooper, Product Manager, discusses the hack day she ran to tackle Youth Unemployment, covering how the day unfolded, and what the results were.

When I left school I didn’t go to university. I wanted to start working as soon as possible but I had absolutely no idea what I wanted to do. I had no experience except for working in shops at weekends, and I knew nothing about career options apart from those which I had come into contact in my life such as ‘shop manager’, ‘teacher’, ‘doctor’ and whatever all those people did when they went to an office.

I was lucky enough to have a Dad who ran a printing business who, instead of allowing me to wallow and contemplate my future, immediately made me work at his factory, initially cleaning and tidying, then answering phones and emails. Quickly he trusted me to do all sorts of jobs such as managing finances, speaking to prospective clients and organising print jobs and deliveries. The experience I gained at my Dad’s helped me to get my job at the Guardian, and from there I was lucky enough to have got into a company that encourages their employees to progress.

I cannot begin to understand how I would’ve found a job without the support of my family. 12% of 16-24 year olds are not in education, training or employment in the UK (and that number is skewed is because 16-18 year olds are legally obliged to stay on in education). Those who are in employment have often struggled to get there, taking unpaid or low-paid jobs along the way. All of this contributed to why I decided to run a hack day focused on Youth Employment.

The event took place at the start of April and we brought together 50 or so people to explore the problems facing young people today in finding employment and come up with ideas to help tackle some of those problems. We had a bunch of young people there, plus a whole variety of people from different sectors such as Technology, Charity, Publishing, Retail and Education, who either work with young people or just had a general interest in the topic.

We started by exploring the problems 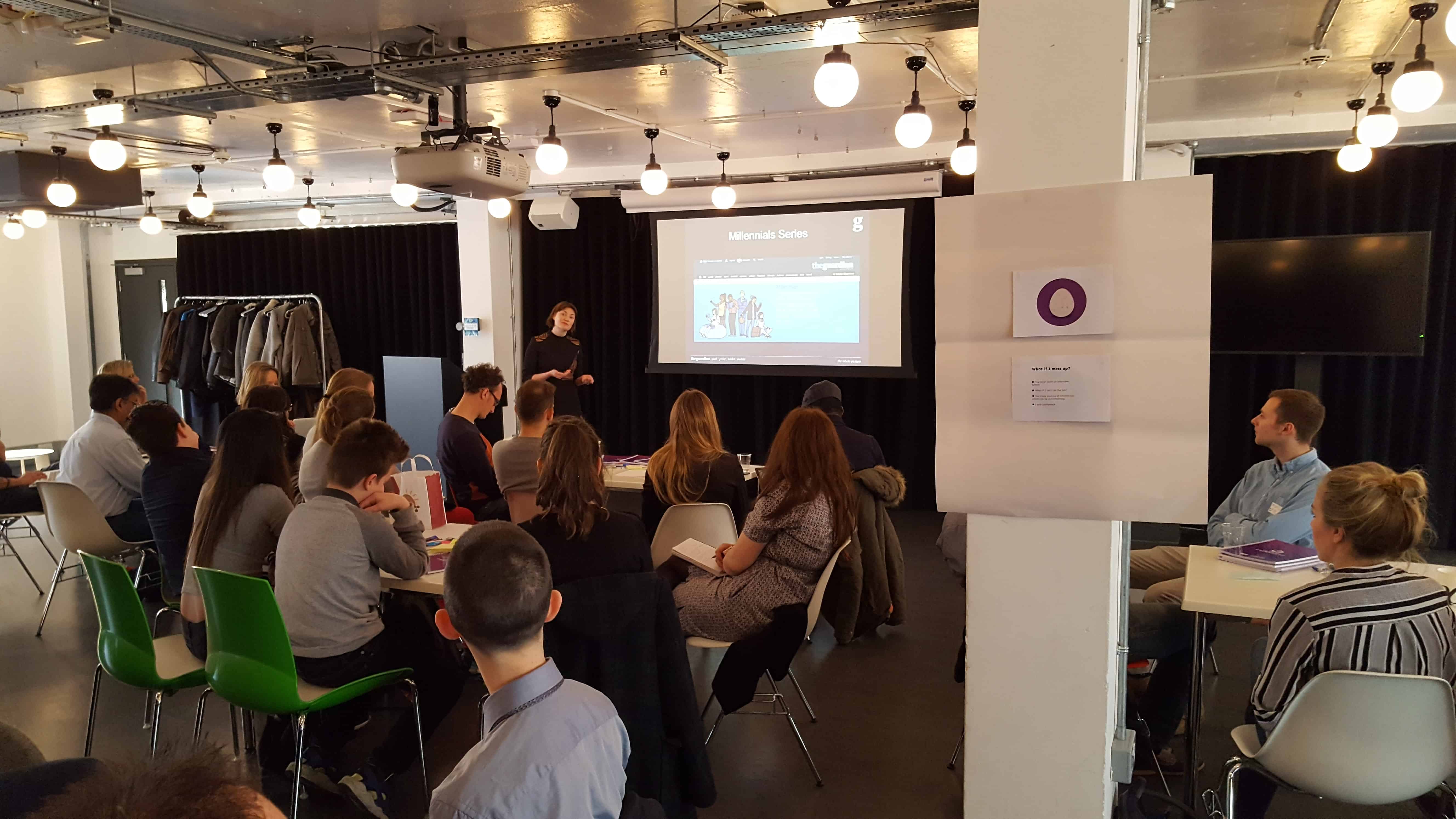 Caelainn Barr, a data journalist, kicked off the day sharing research into ‘millenials’ and the problems they face with employment. As a large group we then brainstormed all the different challenges that young people and employers face:

Then came the ideas 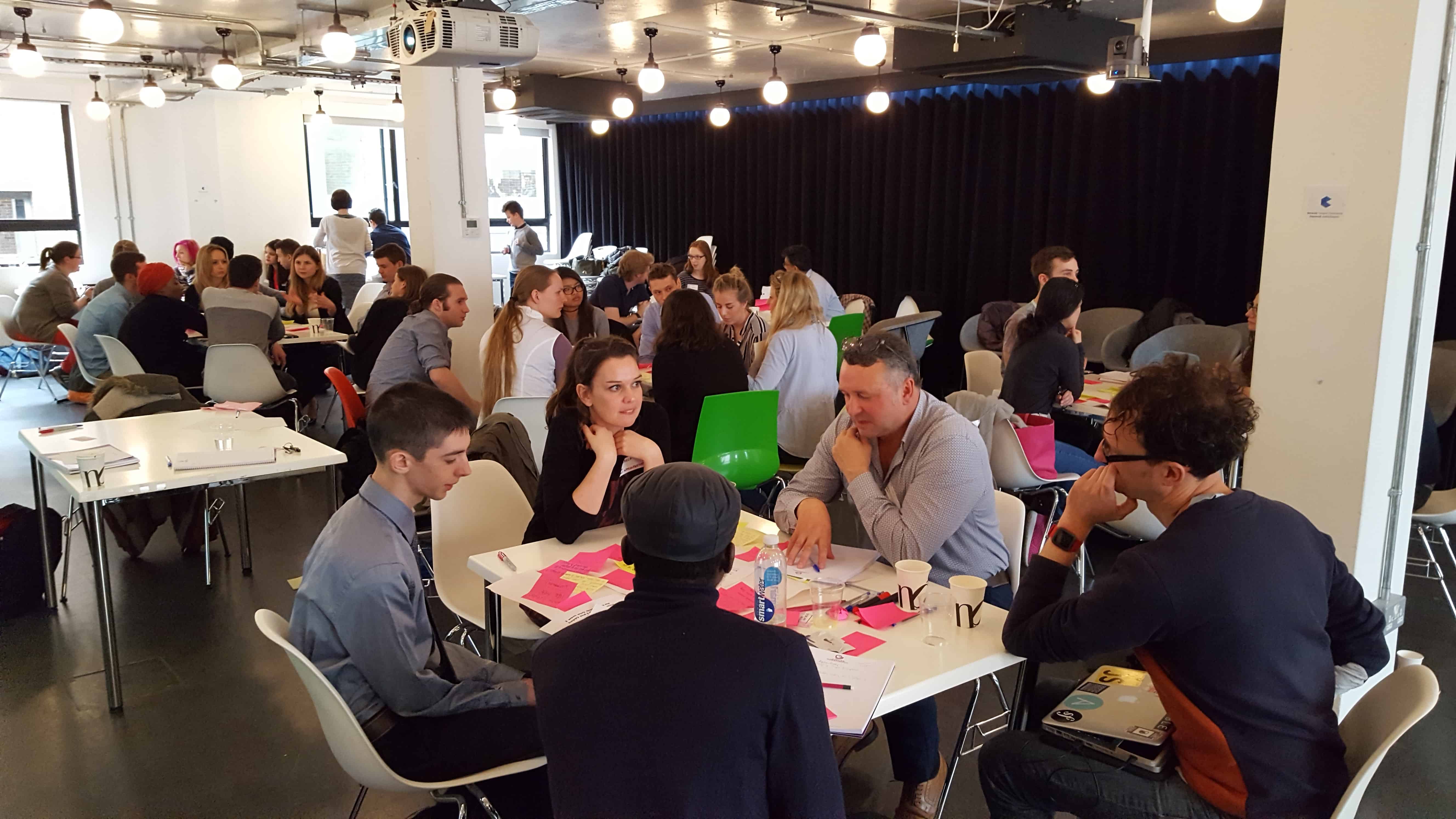 We then broke out into smaller groups to come up with ideas to tackle specific problems. Each team showed serious passion for the topic, with many people getting into deep conversations about the problems with the education system, with politicians, with parents and all of the conflicting messages that young people have to contend with. These are big problems to combat but many of the teams managed to come up with focused ideas to tackle these problems one step at a time. Here are some of the highlights: 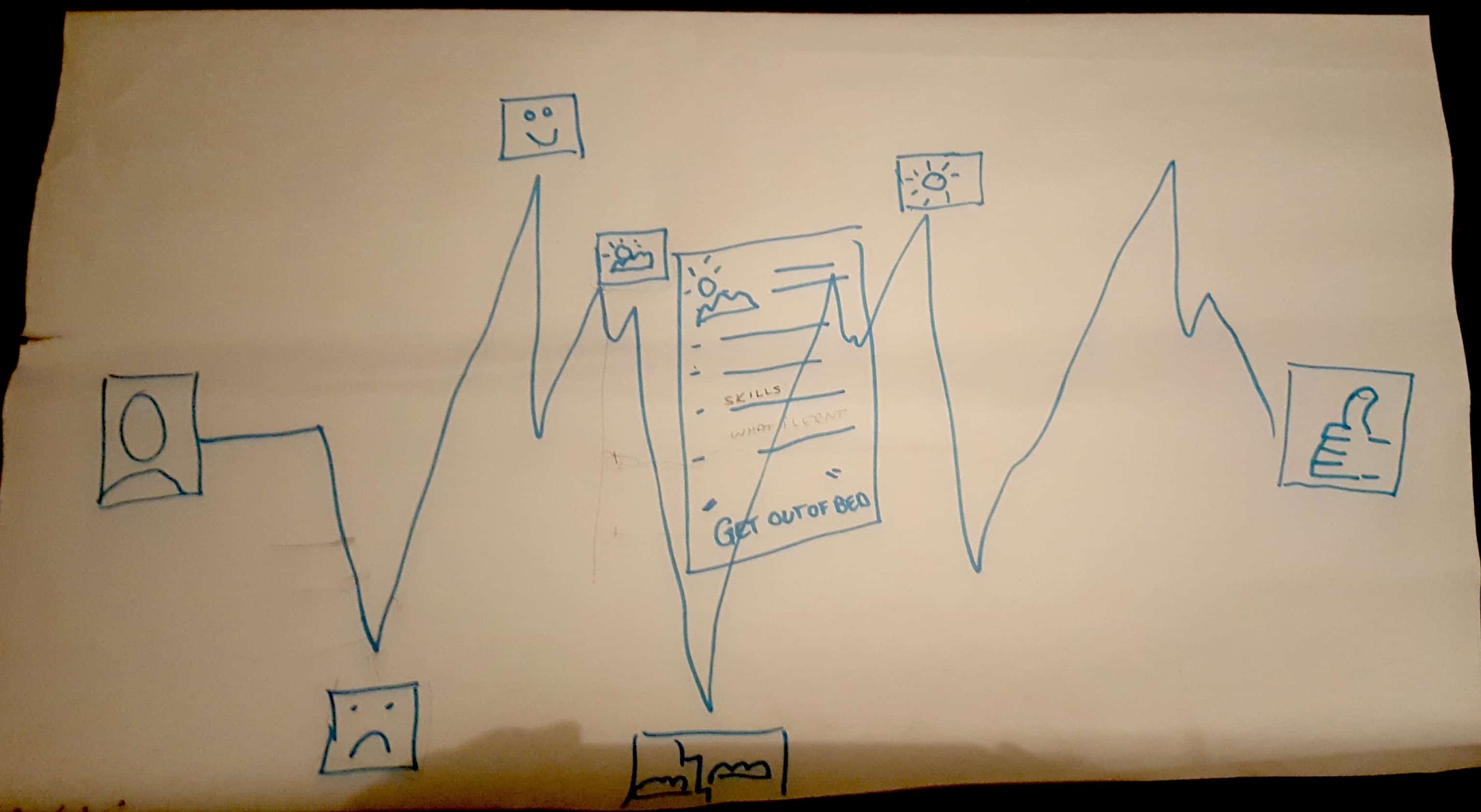 This idea centred on capturing people’s career paths. They wanted to make it clear that finding a job and developing your career is usually not a linear path. Their idea was to create an app which not only allowed young people to explore some of the ups and downs and sideways moves that individuals in various sectors and roles had experienced in the past, but which also allows them to map their own journeys; to record their training, the interviews they have, their highs and lows so far and what they have learnt along the way. 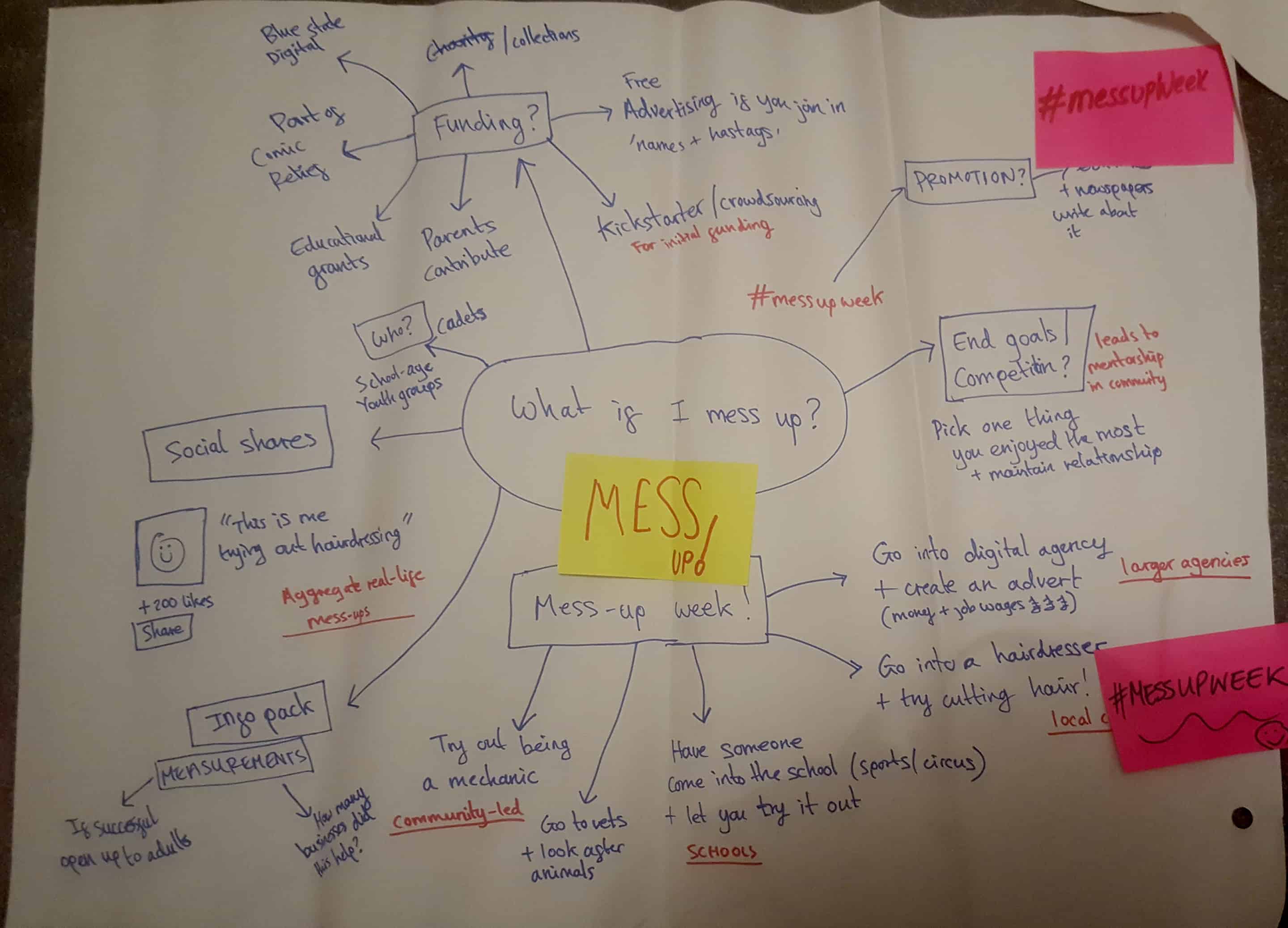 One idea was to work with schools and employers to introduce “Mess Up Week” throughout a young person’s schooling. The team felt that the week-long work experience that most young people get when they are 15 or 16 years old was not enough to help them determine what type of industry they wanted to work in. Their idea allowed young people of all ages to try a whole variety of skills and jobs, with a particular emphasis on making it okay for them to “Mess Up” and celebrate the mistakes that they make during the week. 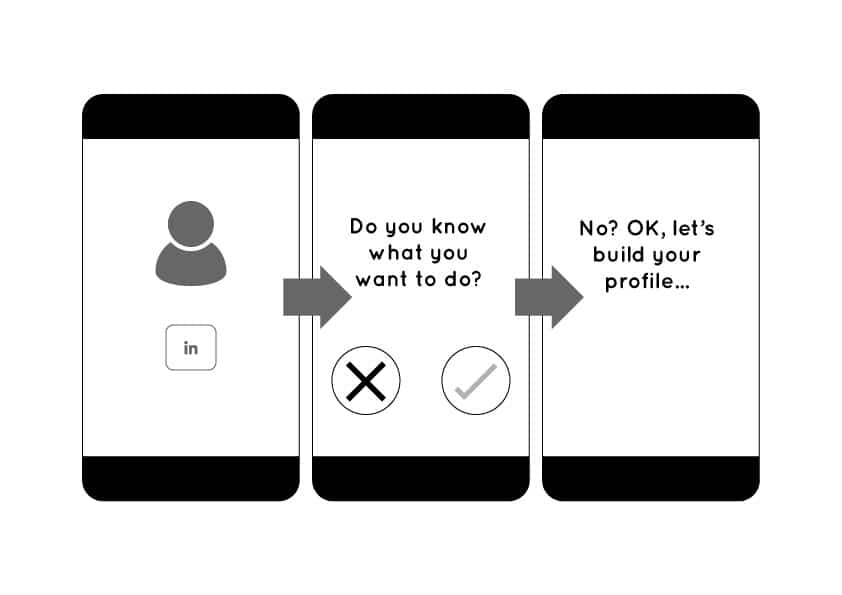 Another approach that one team took was developed to help young people better understand what skills they had already and what they might be suited to. They suggested building a short app questionnaire which would ask them questions about their interests and experiences and suggest jobs, apprenticeships or training at the end. The team recognised that similar tools exist already but their focus was on simplicity, and purposefully aimed at young people who really don’t know where to start with their search.

So what happens next?

The best outcome of the day was that within the group exploring the skills assessment idea there was  an unemployed 18 year old boy working together with a director from Tech City Stars. Thanks to the connection they made, Tech City Stars offered him an apprenticeship shortly after the event which he is now thoroughly enjoying and gaining lots of experience from.

In addition an attendee from the Sainsbury’s Technology team also said that they would now be exploring options to hire more junior members of staff after having heard some of the discussions throughout the day, and many other attendees are keen to pursue similar recruitment drives.

The day even created a spin off group: now there is a group of passionate people from across different sectors who enjoyed the event so much that we have agreed continue working on some ideas together. We’ll be getting together at the FutureLearn offices in a few weeks time to start building one of the ideas.

If you are interested in helping us to progress any of the ideas to help tackle youth unemployment then please feel free to add a comment below.

Enjoy this post? Find out more about life at FutureLearn.