Find out more
Home What is influencer marketing? And how can you get into it? 
Published on July 12th, 2022 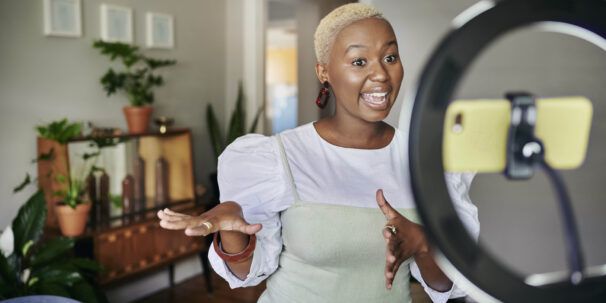 Although it’s existed for little over a decade, influencer marketing now wields significant power over our day-to-day decisions. A study by Civic Science found that 14% of 18-to-24-year-olds and 11% of millennials had bought something recommended by an influencer or blogger – and that’s just in the past six months.

In this article, we’ll explain what influencer marketing is and how you can get into the industry – whether you’re a small business owner looking to promote your product, or a social media aficionado wondering how to become an influencer. We’ll have expert insights from Emma Wills – senior account director at SEEN Connects, a London-based influencer marketing agency – and Professor Jonathan A J Wilson, who designed our Personal Branding ExpertTrack.

What is influencer marketing?

Influencer marketing is when a company hires a social media influencer to promote their product or service, either directly or through an agency. The definition of an influencer is one who influences others – in this case, using social media sponsored posts to influence people to either buy a product or complete any other action that increases brand awareness (such as sharing a post or following that brand on social media).

The precursor to influencing was the celebrity endorsement. The celebrity would receive money in return for promoting that product in an ad or using the product in a public setting (such as Roger Federer wearing his Rolex watch during a trophy ceremony). The main difference with influencers is that they can be known for influencing in their own right – they don’t need to be famous for any other reason (though it helps, as we’ll discuss below). Influencers also don’t need to be particularly well known to wield considerable marketing power, especially if they post in a niche area. These lesser-known influencers are known as “nano-influencers” and represent an exciting new trend in influencer marketing.

Instagram is the main platform used by influencers, with 93% of US marketers using it for their 2021 marketing campaigns. However, TikTok is fast gaining ground as Generation Z begins to enter the workforce and gain spending power. YouTube is another popular social media platform for influencer marketing, with sponsored products finding their way into makeup tutorials and interior design vlogs.

Bloggers are a less talked-about, yet extremely effective influencer group. Instead of using social media platforms, bloggers post about a product or service on their personal site. Bloggers often have a dedicated audience with a specific interest, such as travel or fashion.

How to create a successful influencer marketing strategy for your business

According to Emma Wills of SEEN Connects, the most successful influencer marketing campaigns incorporate three elements: authenticity, direct engagement and holistic thinking. We’ll take a closer look at each below – but first, let’s get to know the five influencer types.

The 5 types of influencers

How many followers do you need to be an influencer? Not as many as you think. Broadly speaking, influencers fall into five categories:

Generally, how much you pay for an influencer’s services is proportional to how many followers they have, with celebrity mega-influencers being the most expensive of all.

The rise of the nano-influencer (and why engagement is important)

With that in mind, you would assume that you should fork out for the highest-tier influencer you can afford for your social media advert, right? Not necessarily – a fascinating new trend in marketing shows that nano-influencers wield greater power than their tiny following would suggest.

The social media accounts of nano-influencers typically have a less polished aesthetic – they use fewer filters and speak to their followers more. As such, they display two of the most desirable traits of successful influencing: authenticity and engagement.

“Successful influencer campaigns… should speak directly to the target audience,” says Wills. With fewer followers – and therefore fewer commitments – nano-influencers are more likely to engage with their community, answering every comment and building a meaningful dialogue with their followers. This way, they gain a small but dedicated fanbase who are more likely to trust their recommendations. In fact, a 2019 survey by HypeAuditor found that the engagement rate of nano-influencers was twice as high compared with any other influencer group. Therefore, the client’s cost-per-impression is much lower.

The importance of authenticity in influencer marketing

Authenticity is marketing’s holy grail – a source of considerable power, but almost impossible to find. Find it, however, and you’ll significantly increase your chance of success. Authenticity is particularly important to influencers, whose audiences will detect phony marketing a mile off.

One of the most common reasons for a campaign going awry is a lack of influencer/brand alignment, which feeds into a lack of perceived authenticity. Asking a fashion influencer to promote a range of shoes? Great. Asking them to promote life insurance? Not so much. “Partnerships need to feel natural and authentic,” says Wills. “Authentic alignment is essential; unfortunately, there are a lot of terrible examples out there that give influencer marketing a bad rep. When the influencer is inherently an ambassador, the message lands authentically.”

How do agencies like SEEN Connects find the perfect match? “First and foremost, take the time to really understand the brand and then it’s a case of mapping out the influencers that authentically align,” says Wills. “At Connects, we use a philosophy of ‘archetypal alignment.’ We spend a lot of time on the strategy side of the project, defining the archetypes that are the right fit for the brand and campaign. When you get this right, audiences are far more likely to be engaged and it feels less like an ‘ad.’”

Finding archetypal “sneakerheads” was the key to one of SEEN Connects’ biggest successes – their EBay’s OG Drops sneaker campaign, which saw the opening of eBay’s first-ever bricks-and-mortar pop-up store at Morley’s, London. Sneakerheads who attended the pop-up had the chance to enter an in-store raffle to get the world’s most hyped trainers on their feet – for their original retail value.

“We curated a collective of sneaker influencers who fronted the OG Drops campaign,” says Wills. “The aim was to win back authentic consumers, and drive buzz and excitement around eBay’s first UK sneaker store.”

The Ebay OG Drops campaign succeeded because it wasn’t just about social media – there was a real-life store involved. “The best campaigns that incorporate influencers have been thought about holistically as part of a 360° campaign,” says Wills.

Even if your campaign doesn’t have a physical element, there are other ways to think holistically. “It should never be about just looking at how the content will sit on the influencer’s own channels, but how it can be extended through paid, owned and earned [media],” says Wills. For the unfamiliar, here’s a quick primer on those three:

It’s also important to analyse the results of your marketing to keep developing more effective campaigns.

How to become an influencer

“You should strike the balance between caring and not caring,” says Wilson. “These things may take time… but on the other hand, you might get lucky, and something happens, which is outside of your control or you hadn’t expected – and that catapults you to the next level.”

Consistency is key – you’ll put yourself in a good position if you’re posting regularly and building your personal brand with every post.

“You need to have a clear idea about what you’re known for and what you’re prepared to do; you should have worked out your pricing rates are in advance,” says Wilson. Treat your clients as you would any other working relationship: be easy to work with, efficient and professional. You don’t need a huge following – nano-influencers wield significant marketing power, as we’ve mentioned above – but you should be able to tell potential clients details about your account performance, such as the number of accounts reached and the number of interactions (you can do this using native tools such as Instagram Insights).

You’ll also need to build a simple website and pitch deck. As well as follower stats, these should contain a compelling bio, links to your social media handles, a contact email, several profile photos and examples of your best social media posts.

It’s worthwhile to identify your main rivals and what works well for them – but you’ll need to put your own spin on things if you want to stand out in a cluttered field. “You need to know what other people are doing and experiment with doing something a little different,” says Wilson.

According to Wilson, the best posts have at least one of three things: they’re attractive, informative or entertaining. “Try all three if you can, but that’s hard to maintain all the time. It helps if you have worked out what image, identity and personality you’re presenting and whether they are read in the same way by the people that you want to connect with.”

Even when you secure your first influencer-brand partnerships, it’s important to post in the same way as before and adhere to your authentic style. “Don’t deviate from the style you’ve worked hard to create in terms of your content and personal identity,” says Wilson. “Don’t accept work that undermines them. Ask yourself: what will your audience think if you do this post?”

Become an authority in your field

Remember, you can’t have successful branding without a worthwhile product – this applies to influencers, too. “Personal branding and influencing are not your reason for existing,” says Wilson. “You need to have expertise in one, if not several areas; branding is about value creation for you and others. It is a way of building your reputation, making you easier to find and understand what you’re about.”

What are you good at, or knowledgeable in? Find out and build your social media channels around this. This will help you build authentic brand partnerships – and charge more for your work. “For example, if a guitarist has an influencer deal with a guitar company, or an athlete has a sports shoe deal – assuming that they use the items they are promoting – then this raises them in our esteem,” says Wilson.

Gaining additional qualifications in your chosen field can help you to construct more authoritative posts. If you’re an aspiring fashion influencer, for example, our Fashion Business microcredential will teach you professional skills in fashion marketing and branding.

“Don’t get caught in the trap of wanting to be an influencer or brand and having nothing of value to offer,” says Wilson. “Work out what you have that’s of value to others – that you value, too.”

Influencer marketing is an exciting and fast-developing field. For brands, it’s an effective avenue through which you can speak directly to your audience; for aspiring influencers, it’s the chance to add another stream of income or even move into an entirely new career. And with FutureLearn’s range of social media and marketing courses, you’ll be sure to start out right.