The Geospatial Revolution: What Makes It Possible?

What has changed in geography to make the Geospatial Revolution possible? In this article, Dr. Anthony Robinson from Penn State explains.
© The Pennsylvania State University
I think the Geospatial Revolution involves major transformations in the way we do these things: What’s unique here is that concepts of space and technologies designed to leverage location information have made huge advances in all three of these areas possible. The past decade alone has seen a complete paradigm shift in how normal people are able to use and think about Geography. It’s not just geeks like me with fancy software and high-tech expensive gear who can make and use maps anymore. And maps aren’t just for naming places or placing pins on the nearest Waffle House, although that’s pretty important too.

So are we really experiencing a Geospatial Revolution? Let’s use my daughter as an example. Claire was born in 2012. When she arrived, it had already become commonplace for many people to have interactive maps accessible through computers and handheld devices at relatively low cost. In her world, nobody needs to learn how to use a paper road atlas to find their way to Grandma’s house. Instead, directions to and from almost anywhere can be had for free in an instant using easy-to-manipulate tools like Google Maps.So that’s one way in which personal navigation has been completely transformed. In contrast to Claire, when I was born, it was really important to plan ahead about where you were going (using paper maps, which you had to buy or borrow) or you had to be prepared to take longer, rambling journeys that relied on dead reckoning alone. I still have fond memories of working as the navigator on our family car trips to the beach in South Carolina, spending hours poring over a big paper road atlas that showed only a couple of map scales. When we hit a lot of traffic, I might have to help find an alternate route. Today, we still need to intervene from time to time to find a new way to get somewhere, but it’s as simple as dragging the route around on the map, or telling the GPS to give us another option.For Claire, by the time she’s ready to drive, I suspect it’s likely that making those alternate route decisions will also be a thing of the past. Our cars will simply know the best way to go given current weather and traffic conditions, and take us there with minimal intervention. We’ll all be a little dumber because we won’t even remember how to navigate the old way. I will be stumbling around an old folks home, dragging a shopping cart behind me filled with dog-eared paper atlases while loudly decrying the downfall of civilization.

The Geospatial Revolution is much more than just a transformation in how we go from Point A to Point B, however. It’s also about making decisions and analyzing problems using Geography. Let’s consider the age-old problem of deciding where to eat dinner tonight. We’ll assume that we’ve already looked through the cabinets and decided that nothing good was there for us to make, so we’ll need to take a trip. My wife and I are pretty bad at reaching a decision about such matters, and thankfully we can rely on geospatially-enabled stuff to help us reach consensus. Today, we can just fire up Yelp from a phone and ask it to find the nearest restaurant that serves amazing Sushi and also happens to be open on a Monday night. That question can be answered in just a few seconds now, and if we haven’t been there before, we can tap on a little button to tell us how to get from where we’re standing to our reserved table. It won’t help us sort out the personal conflict that arises when I want a sub and she wants tacos, however. That’s what we need Facebook and Twitter for—to gripe about mundane crap and hear what other people think about our mundane crap. But I digress.Figuring out where to eat is a pretty simple decision for me to describe. What about making decisions like where to locate the next shopping mall in your home town? How about forecasting the potential for a city to be impacted by natural disasters? What about protecting endangered species? Each of these problems requires one to use and make sense of Geography in various ways. What’s exciting is that the Geospatial Revolution has brought about new sources of data and amazing interactive tools that are capable of helping us make those decisions. In each of the five lab assignments you’ll complete in this course, you’ll gain experience evaluating Geographic problems like these and you’ll see how powerful (and how complicated) geospatial analysis can be. You’ll also lose weight, feel happy about yourself, and maximize your earning potential!

This content is taken from
The Pennsylvania State University online course,

View Course
In less practical, but more engaging terms, we’re also able to use Geography now to share our personal stories in much richer ways. I’m a big photo nerd (and map nerd, and airplane nerd, and… basically just a many-faceted nerd) and even if you’ve barely been paying attention for the past 10 years, you’ve no doubt seen photo sharing sites like Flickr and Picasa. Both services allow you to easily Geotag your photos. Geotagging is a form of geocoding, which is the term used to describe the assignment of location information to a data record. After you upload your pictures to Flickr, you can say where they were taken by either assigning place information manually (“tagging” a photo of the Eiffel Tower by saying it was taken in Paris) or by uploading coordinates that were captured by a GPS device that you used to track your movements (so you can be much more specific about the exact spot on the earth where the photo was taken). I bought a camera recently (a Canon 6D) that has a built-in GPS tracker to assign coordinates to every photo automatically. As I travel, I’m actually making maps. Awesome.It’s this kind of revolution that allows us to tell stories using Geography much more easily than ever before. In 1999 if I wanted to make a map that showed all of the places where I stood and took pictures on the epic 5-week trip I took across Bolivia, Peru, and Ecuador, I would have had to buy and carry with me a heavy, cumbersome Global Positioning System (GPS) receiver and develop my own workflow for scanning my photos from film and digitizing everything into Esri’s ArcView 3.0 Geographic Information System (GIS) software. While it was possible, it would have been incredibly difficult to pull off, and it was certainly the type of thing that was well out of reach of most normal people who just want to document their cool travel experiences. If we went back another ten years to 1989, even that clumsy process would have been impossible to imagine unless you happened to also run a huge spy agency.Today, however, I could actually go back and scan those photos, and just drag them onto the map in Flickr (assuming I remember where I took the pictures… but just play along with me). I’ve shown that process here using the current Flickr interface and a picture of my daughter crying which I thought really needed to be on my personal map. 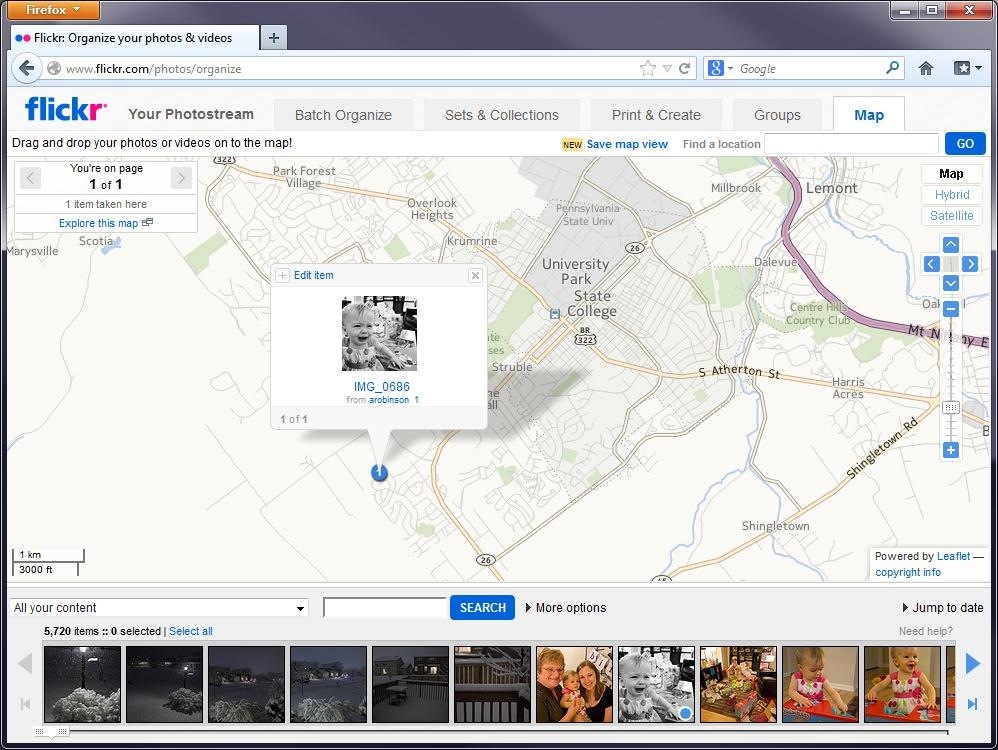 This content is taken from The Pennsylvania State University online course 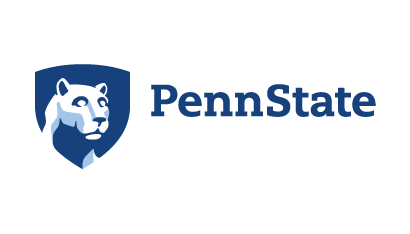