Disruptive technology and next generation sequencing

The rapid progress in the field of human genomics has been driven by the emergence of key technologies exploiting the chemistry of DNA synthesis. 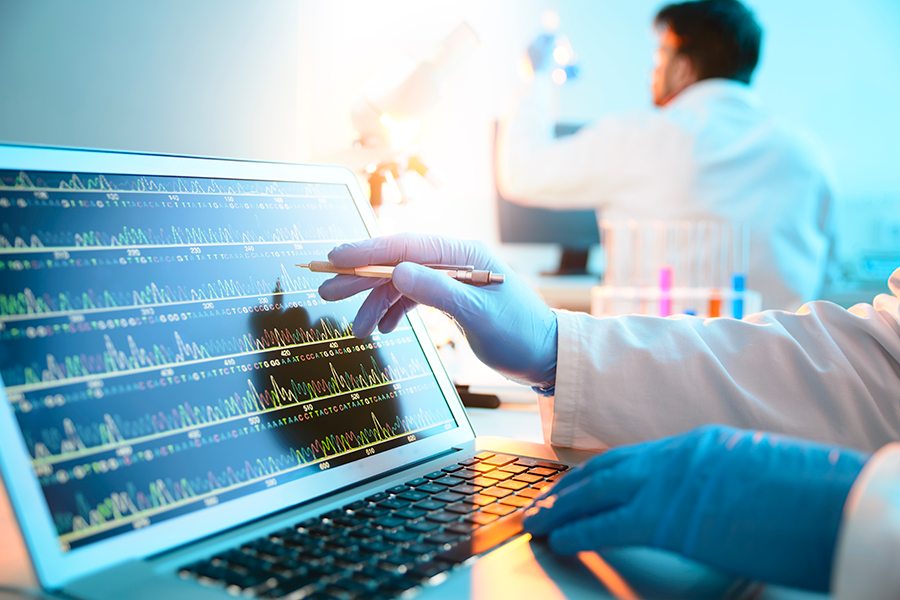 The rapid progress in the field of human genomics described in this course has been driven by the emergence of key technologies exploiting the chemistry of DNA synthesis. For example, since 1986 the polymerase chain reaction (PCR) has allowed for the exponential amplification of short targeted nucleic acid sequences. PCR has been applied to the diagnosis of genetic disease, the detection of microorganisms, and the ultra-sensitive detection of minimal residual disease during cancer treatment. The prescient genomics community has recently developed and embraced another disruptive technology; high-throughput DNA sequencing referred to as next generation sequencing (NGS). This development may herald the translation of our understanding of the genomic basis of disease into laboratory tests with cost-effective utility.

The use of Next Generation Sequencing (NGS) in Diagnostic Pathways

NGS technologies enable the inexpensive production of very large volumes of DNA sequence data in a short amount of time through the massive parallel reading of sequence. More than 6 billion short sequence reads (1800 giga base pairs) can be generated in a single run, in less than three days. The commercial platforms available do vary in cost and application, each employing a different underlying chemistry or protocol, however Illumina’s HiSeq is currently by far the dominant player.

View Course
Every platform requires DNA preparation; optional DNA selection; sequencing and imaging; followed by data interpretation and analysis. Short-read or shotgun sequencing technologies such as Illumina’s (breaking the sequence into short fragments of ~150 bp before sequencing) minimise the risk of misclassifying some inevitable sequencing-errors as genome variants through repeated duplication of the sequencing analysis (this is referred to as a high-coverage, or deep-sequencing).We have nearly reached the goal of the thousand-dollar genome (the first human genome took more than a decade to sequence at a cost of nearly $3 Billion dollars) with the launch of new platforms such as Illumina’s HiSeq X; which is optimised for whole genome sequencing (WGS) rather than just exome sequencing (which focuses on the protein coding elements of the genome only; comprising < 2% of the total DNA sequence). The continuing decrease in costs and huge potential clinical utility will lead to widespread adoption of these technologies in the hospital in the next five to ten years.This includes all production costs, further information can be seen on the National Human Genome Research Institute website.

Bioinformatic analyses are used to detect differences between the DNA sequence of the patient and the human reference sequence (to identify germline variants); or between diseased tissue and normal tissue (to identify somatic or acquired variants). These differences in the genetic code hold the keys to unlock the causes and accurate diagnosis of genetic disease. The biggest hindrance to the utility of whole genome sequence in clinical practice is that many variants are detected which are inconsequential or of unknown significance. The importance of specific variants are continuously improving through large scale projects such as Genomics England’s 100 Thousand Genome Project, the precision medicine initiative, and AstraZenca’s 2 million sequences project. Despite this it might be more appropriate to target specific areas of genes known to be mutated in human diseases could be analysed; for example searching for functional variants of the CFTR gene for individuals who are symptomatic for cystic fibrosis. Or analysis of the relevant genes for a pharmacokinetic pathway if the risk of drug-related adverse events was under consideration. Selected genome analysis would avoid the need for the individual or their doctor to grapple with incidental findings and unsolicited information. Studies show that service users generally say they want to receive all the genetic information relevant to them. However, as individuals we may not anticipate the psychological or familial impact of being told about risk factors for future diseases for which there are no preventive or curative options, for example dementia.See also, Whole Genome Sequencing. A FutureLearn Course produced by Health Education England’s Genomics Education Programme
© University of East Anglia

Hi there! We hope you're enjoying our article: Disruptive technology and next generation sequencing
This article is part of our course: Using Personalized Medicine and Pharmacogenetics