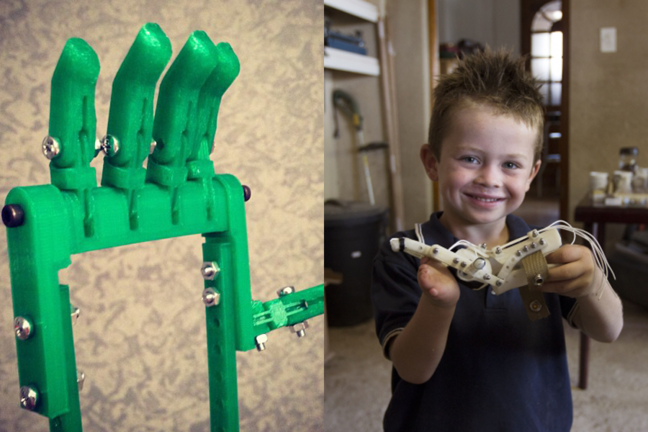 In May 2011, Richard van As, a South African carpenter, lost all four fingers on his right hand in a woodworking accident.

Dismayed by the lack of affordable prosthetics available, he decided to invent his own. He met an engineer, Ivan Owen, on an internet forum and they collaborated in designing a low-cost finger to return some function to Richard’s hand. The project was a success, and soon after publicizing it they received an enquiry from the mother of a boy born without fingers. Could they design a new hand for her son?

Whereas they had been successful in creating their first customised prosthetic finger using traditional manufacturing methods, it was a long and difficult process to replace a hand. During development of the full hand prosthetic, Richard and Ivan realised that 3D printing could dramatically accelerate development. They contacted the ‘Makerbot’ company, explaining their idea to invent a prosthetic hand that could be printed out and assembled by the wearer. Makerbot donated two 3D printers to the project (one for Richard in South Africa; one for Ivan in the US). Thus began the iterative (and intercontinental) rapid prototyping involving design, printing and redesigning to make the prosthetic ‘just right’.

“Prototyping just became that much quicker with Richard sending his changes and ideas to Ivan during the day, while the USA was sleeping, and Ivan would work his magic and make those changes into tangible files that he sent back, while SA was sleeping. Rich would then print it out when he got up he could put it all together and rework the design. It was amazing to watch this scenario unfold.”

The result was the ‘Robohand’ The emphasis of the Robohand design is low cost, and so the device can be printed using ‘household’ scale 3D printers using the plastic ‘Acrylonitrile butadiene styrene’ (ABS). Orthoplastic is used to attach the ABS hand to the arm. Whereas custom fitted prosthetics can cost tens of thousands of dollars, Robohand costs only $200 in materials.

Rather than patenting and licensing the technology for profit, however, Richard and Ivan made the design freely available. Now over 200 people around the world have been fitted with a prosthetic they could never otherwise have afforded. Richard went on to set up his company, Robohand, and their 3D printable prosthetics now include Robofinger, Roboarm and Roboleg.

Imagine you were designing a prosthetic hand:

An entertaining and illuminating course for everyone to explore the impact dentistry has on our lives.