Working with groups: norming to performing

To ensure you get the best out of participants in a storyboard workshop, it helps to be aware of group dynamics – how groups form and work together effectively.

One of the most well-known pieces of research on groups is by Bruce Tuckman who coined the familiar stages of group development processes in his 1965 paper Developmental Sequences in Small Groups as:

With respect to storyboard development, when a small group first convenes, they spend a short time getting to know each other and engaging in polite discussion (forming).

The storming phase is where groups start to get into the task and throw in lots of ideas and the discussion becomes more intense. They may have disagreements about what direction to take and tensions may arise.

When the group successfully manages to agree on the group task then they start working productively together agreeing on a way forward and getting ideas down onto the storyboard.

At the performing stage, the group is working together extremely effectively. Ideas flow and the group are motivated and enthusiastic in working towards their common goal and handle differences of opinion respectfully. Group identity is strong and they have a sense of ownership and pride in the results. 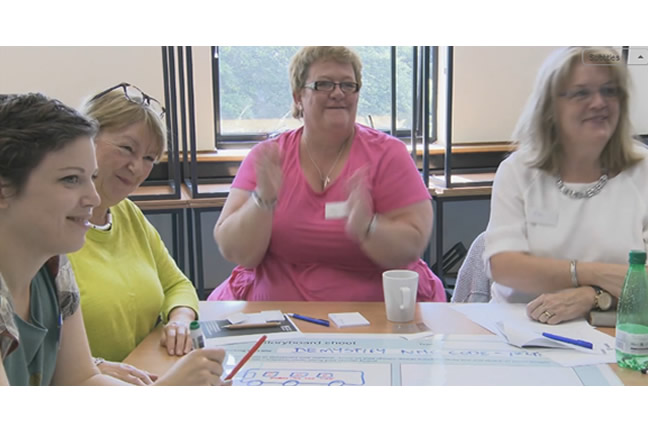 As a facilitator, you can be aware of these development stages, and try to gently steer the groups into the performing phase. The structure of the workshop may be one method so you can move groups along if, for instance, they spend too long not moving beyond forming. Be vigilant and watch out for ‘storming episodes’ – try to mediate by ensuring everyone has their say and remind the group of the goal and outcomes of the workshop.

Alan Williams, a researcher at the University of Nottingham, is currently researching tutors and student group dynamics in the RLO storyboard design process. Interestingly, he found that a group consisting of just students were more likely to get on with the storyboard in an uncomplicated way, whereas the group of just tutors spent more time up front discussing detail and the objective of the RLO. The ‘storming’ phase for the students was not as long.

There is no right or wrong – each phase has value and is a normal part of the process. You may have a quiet group who you want to get past the ‘forming’ stage and into the ‘storming’ stage. Perhaps you as facilitator ask a controversial question to get them thinking and talking to nudge them towards a ‘performing’ stage.

© The University of Nottingham 2016 (Creative Commons Attribution-NonCommercial-ShareAlike UK 2.0 Licence) except for third party materials or where otherwise indicated

Introduction to Psychology: The Psychology of Learning

Explore how new behaviours are learnt by examining different types of psychological conditioning.