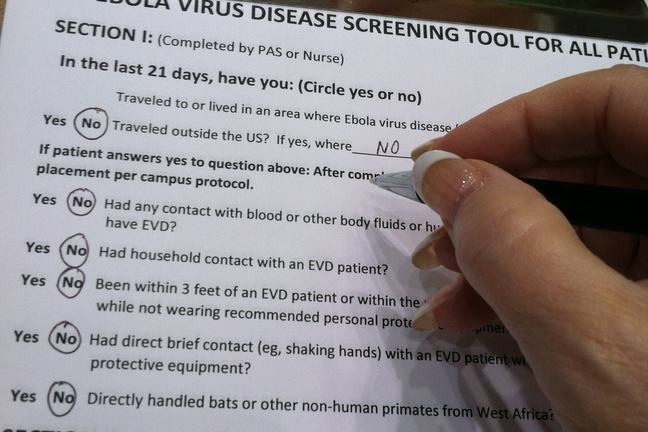 Airport screening for Ebola and other travel restrictions

People with Ebola arriving in new areas may trigger new outbreaks. Countries and territories have responded with travel restrictions and entry screening for those arriving from Ebola-affected areas. The Southern Africa Development Community (SADC) countries imposed quarantine for 21 days for all such passengers, and other countries have closed their borders. Which restrictions make sense?

The World Health Organisation (WHO) recommends that travellers should be screened before leaving Ebola-affected countries, and those with fever not allowed to travel. In addition, the UK and other countries have introduced airport screening to try to identify people with Ebola on arrival, to prevent further transmission. This was also tried for severe acute respiratory syndrome (SARS). Like Ebola, the incubation period of SARS is shorter than the latent period, so people only become infectious after they get symptoms. It was therefore thought that screening people at airports would help detect cases and limit transmission.

In an editorial in the BMJ, Professor David Mabey, Dr Stefan Flasche and Professor John Edmunds from the London School of Hygiene & Tropical Medicine argue that this does not make sense for Ebola.1

Their first argument is logistic. In the UK, direct flights from affected areas were cancelled. Passengers now arrive from different European cities and are thus difficult to identify. Passengers may also fear delays if they report that they have been in West Africa, had contact with sick people or attended funerals, or have any symptoms, so screening may miss the people most at risk.

Secondly, there is a comparison with SARS, where airport screening did not detect any cases. In Canada, 677,494 arriving passengers completed questionnaires and 2478 were selected for further screening; none had SARS. Thermal scanners at 6 major airports screened 467,870 people, and identified 95 passengers with suspected fevers, none of which were confirmed. The cost was estimated at US$15million.1

Using a simple model, taking account of the incubation period of Ebola and the flight time to the UK (allowing for indirect flights), Mabey, et al1 estimate the proportion of passengers with Ebola that could theoretically be detected by screening at arrival at an airport, if screening worked perfectly. If there were pre-flight screening, the model assumes this will pick up anyone with Ebola who is symptomatic at that point, so that screening on arrival can only detect those who develop symptoms during the journey. In this situation, only about 13% of those with Ebola would be picked up by the screening on arrival. If there were no pre-flight screening, those who were already symptomatic could get on the flight and screening on arrival could detect 43% of cases.

They emphasise that providing information on where and how people arriving from those countries should seek help if they do get symptoms is a much higher priority than screening on arrival at western airports, and is much cheaper. The money saved could be more effectively spent in West Africa.1

In countries with weak health systems the potential consequences of admitting even one person with Ebola are severe. In that context the severe travel restrictions imposed and the use of quarantine are understandable. Restrictions have changed since the height of the epidemic. The current situation is summarised by International SOS.

Travel restrictions and quarantine areas are an important control measure within the affected countries. Directives on national and regional restrictions are summarised on a ‘dashboard’ for easy access in areas with poor internet coverage.