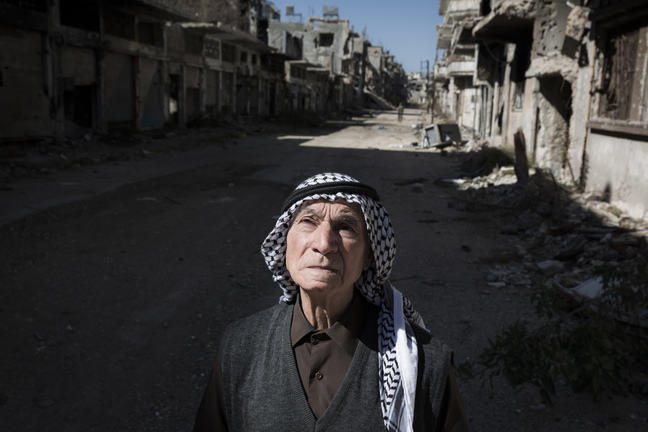 How are the elderly affected by humanitarian crises? In this step we explore the ways in which older people can be disproportionately affected by disasters due to their specific needs and vulnerabilities, inability to access key services, and the fact that their needs are not generally considered as part of a crisis response.

Data on the elderly

Today, around 12% of the world’s population is aged 60 or over, totalling approximately 901 million people. In just four years’ time, the number of older people will surpass 1 billion1. Currently, two-thirds of older people live in low-income countries , where disasters are more likely to occur and the impact of humanitarian crises is greater. This demographic change now demands that humanitarian assistance is adapted to the specific needs of older people.

However, while the data available is limited, it is clear that older people are disproportionately represented in disaster-related mortality and morbidity. When Hurricane Katrina struck New Orleans in 2005, 64% of those who died were over 65, even though this age group comprised a small proportion of the local population2,3. In spite of this, humanitarian response overwhelmingly fails to consider older people. Even basic steps such as the collection of age-disaggregated data are not always completed. A Tufts University study from 2011 found:

“almost no documented and published cases in which lead agencies […] collected Sex- and Age-Disaggregated Data [SADD] properly, analysed the data in context and used those findings to influence programming.”4

Humanitarian financing research conducted by HelpAge International found that of the 16,221 humanitarian projects analysed that were implemented between 2010 and 2014, just 154 included at least one activity specifically targeting older people, and only 74 of these projects (48%) were funded5.

Why are the elderly so vulnerable in humanitarian crises?

The physical, psychological, and logistical vulnerability of situations often faced by older people before a crisis places them at significant risk during the onset of an emergency. They are often among the poorest members of a community, and this affects their access to basic goods and services, posing a risk for their survival both during and after a crisis.

Compounding their limited access to services and contrary to the common assumption, older people are not always cared for by their family or community. Furthermore, older people with physical and sensory disabilities or poor health status are likely to experience greater dependency and vulnerability as their usual family and community support structures are disrupted.

The health needs of the elderly in crises

By 2020, non-communicable diseases (NCDs) are expected to account for 70% of deaths in developing regions compared with less than half of deaths today6. NCDs disproportionately affect older people and interruptions in treatment for common conditions such as hypertension and diabetes are debilitating and can be fatal.

Research in Jordan and Lebanon found that 54% of older refugees were affected by one or more NCDs7. However, appropriate treatment options delivered by humanitarian health actors are rarely adequate. While the latest revision of the Sphere Handbook recognises the increasing evidence of acute complications from chronic diseases in disasters and encourages their treatment, there are virtually no guidelines for the management of chronic medical conditions that disproportionately affect older people in the humanitarian sector.

In the nutrition sector older people are almost completely left out of humanitarian interventions despite being highly vulnerable. Even with a growing body of evidence relating to the challenges of meeting older people’s nutritional needs in emergencies, they are still not specifically included in assessments and there are very few elderly-specific nutrition interventions. In contrast, targeted assistance is a well-established practice for other vulnerable groups, such as pregnant and lactating women and children under five.

To begin to address the current evidence gap, HelpAge conducted nutrition assessments in Kenya, Chad, Ethiopia, and South Sudan and found significant levels of malnutrition among older people that had not been assessed or responded to by nutrition actors8. More than two in five older persons in the Protection of Civilians sites (POCs) in Juba were severely or moderately malnourished. HelpAge International, Valid International, and Brixton Health have now developed a simple, rapid, low cost, accurate, and reliable survey method for assessing the nutritional status, vulnerabilities and needs of older people called RAM OP9.