This content is taken from the London School of Hygiene & Tropical Medicine's online course, Health in Humanitarian Crises. Join the course to learn more.
View course
3.2 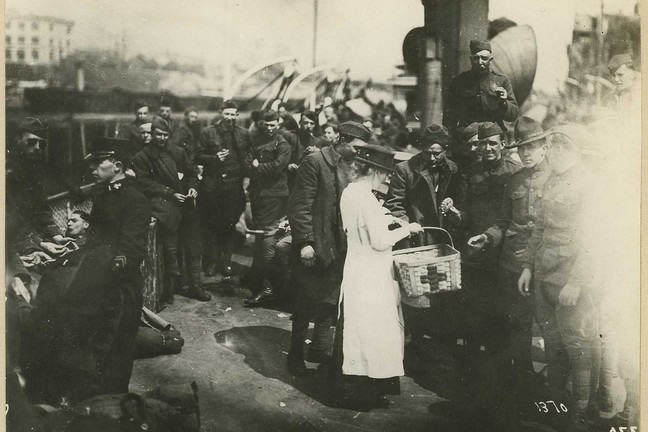 Sick and wounded aboard hospital ship.

The history of humanitarian health and emerging challenges for the future

What do we know about the origins of humanitarian aid, and how has it changed in line with our needs and priorities? In this step we discuss the history of humanitarianism, the changing burden of health needs, and look at the current shift in focus towards NCDs, sexual and reproductive health, and mental health and psychosocial support.

The history of humanitarianism

With the world’s eyes on the humanitarian response to the conflict in Syria and migrant crisis in Europe, it is important to remember that humanitarian action in times of war, disease, and disaster has been evolving since the 18th century. The history of humanitarianism in conflict began with the French Revolutionary and Napoleonic Wars between 1793 and 1814, and during these battles the Duke of Wellington came to value his surgeons for their ability to preserve military manpower, allowing soldiers to recover and return to the battle field more quickly. This established the role of the military medic. In 1819 a service manual was commissioned, covering every aspect of military medical management from setting up camp to the provision of ambulances. The manual was intended to act as a guide for surgeons engaged in future conflicts, when those who had experienced the war were no longer around to advise1.

Humanitarian aid began formally in the 19th century, when state, religious, commercial, and philanthropic actors became involved in famine relief efforts. This aid was focused mainly on the idea of containment, and viewed those who benefited from aid as a threat to the social order and requiring discipline. However, a second strand of humanitarianism emerged when Henri Dunant was so appalled by the neglect of wounded soldiers in the Second Italian War of Independence that in 1863 he created the International Committee of the Red Cross (ICRC). A new focus on human dignity and the easing of suffering emerged, as the main aim of ICRC was to care for sick and wounded soldiers. Dunant was also instrumental in achieving the first Geneva Convention (1864), which established protection for prisoners of war, the sick and wounded, and civilians in conflict zones1.

During and after the first world war, international humanitarian non-governmental organisations (NGOs) and non-combatant neutral countries emerged as sources of humanitarian aid and shifted the focus towards political change. Throughout the war the Danish State Serum Institute furnished vast quantities of much needed vaccines, such as tetanus, to armies on both sides of the conflict2. After the war ended, this period enabled the endorsement of the Declaration of the Rights of the Child (the League of Nations) and later on, the Convention of the Rights of the Child (the U.N.), showing a shift towards political change.

A shift in thinking

Ever-evolving, the face of humanitarianism was changed once again during The Nigerian Civil War, fought between 1967 to 1970. This war led to a famine crisis and humanitarian emergency in the secessionist state of Biafra. It was the first televised famine. A combination of Irish Catholic missionaries, radicalised medical workers, and the propaganda-savvy Biafran regime elicited unprecedented personal donations from people across Europe and North America. These groups put together an aid airlift and mass food distribution programme inside the besieged and rapidly shrinking Biafran territory1.

These networks and methods were transformed into a new humanitarian language that was politicised, pointed, and decidedly non-governmental. The Biafran relief programme also transformed the organisational principles of humanitarian work. Humanitarians were charged with having prolonged the conflict by abetting the survival of the Biafran regime. However, these interventions were responsible for the foundation of activist humanitarianism and crisis response, and in particular the NGOs Médecins Sans Frontières (MSF) and Concern Worldwide. Ultimately, the Biafra programme has had a profound impact on shaping the contemporary humanitarian landscape1.

Every large crisis has been crucial for developing parts of the humanitarian system. At the Khmer-Thai border in the 1980s, humanitarian organisations started to develop guidelines and medium term strategies to support the lives of Khmer refugees fleeing the Pol Pot regime. The response to the Rwandan genocide (April-July 1994) demonstrated the link between politics and humanitarian response and the importance of accountability and evaluation. Furthermore, the Yugoslavia war in the 1990s highlighted the lack of power of humanitarian organisations in the absence of strong political decisions1. Finally, recent natural disasters, such as the 2010 Haiti earthquake and 2011 tsunami in Japan, demonstrated that the scale of these disasters cannot be tackled with the current level of humanitarian resources.

What is changing now?

Today, with the worsening refugee crisis in Europe, we are seeing a shift in the disease burden experienced by these displaced populations. In response to the changing disease burden the focus of humanitarian health interventions has altered as well. Over the past century, the world has been in an epidemiological shift from infectious diseases to non-communicable diseases (NCDs), such as cancer, diabetes, and heart disease. These diseases, which were thought to only affect high-income countries, have now trickled down to effect low- and middle-income countries as well3-5.

These high burden NCDs are changing the face of humanitarian health needs. Additionally, other health burdens, such as mental health and reproductive health issues, have begun to gain attention in the humanitarian world. These changes can be seen in major NGOs like MSF, who in 2016 released new guidelines for dealing with NCDs in humanitarian contexts, the Inter-agency Standing Committee (IASC) and WHO guidelines on Mental Health Support in Humanitarian Emergencies (2010), academic centres, like LSHTM, who launched the Centre for Global NCDs in 2016, and the development of a sexual and reproductive health toolkit for humanitarian settings by UNFPA.

Humanitarian efforts have evolved throughout history from being run by governments and focused almost solely on the health and wellbeing of armies, to extending protection and care for all citizens affected by conflict and having a stronger charitable and political motivation. Each new conflict or crisis drives changes to the way academics, governments, charities, and the general public view humanitarian efforts. It is important to reflect on and learn from successes, failures, and challenges of humanitarianism in the past in order to best help those affected by humanitarian crises, both now and in the future.