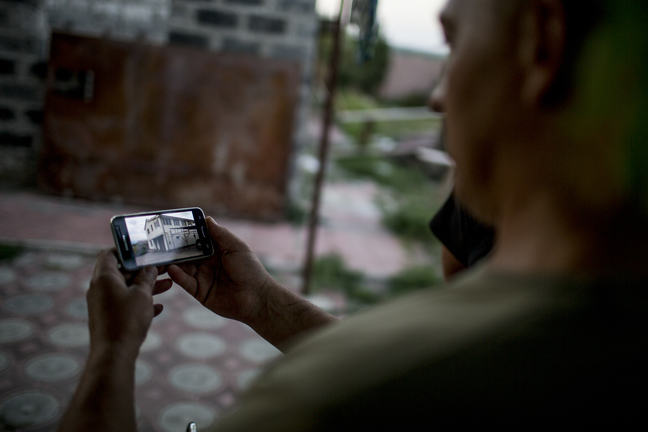 Struggling to rebuildlives shattered by conflict

We are in the midst of a mobile ‘revolution’, but in what ways can commonly available technologies help us to better manage health outcomes in challenging settings? In this step, Alain Labrique of the Johns Hopkins Bloomberg School of Public Health presents some examples of the vital ways in which mobile technologies can help us.

By the end of 2010, the International Telecommunication Union (ITU) estimated that over 90% of the world’s population lived within reach of a mobile phone network and over 143 countries had access to high-speed internet services. In 2016, it was estimated there were over 7.4 billion mobile or cellular network subscribers globally, with the majority (78%) in low- and middle-income countries1.

Since the beginning of this century mobile technology has become increasingly ubiquitous, and with at least one mobile phone per household in many places this change has sparked similar changes in global development. While the ownership of phones is less prevalent among refugees than the global population, 80% of refugees have access to 2G and 3G connections2. As a result, entirely new fields of research and science have emerged, prefaced by an ‘m’ that represents the ‘mobile’ facet of their approach, such as mHealth, mNutrition, mBanking, mAgriculture and mLearning. Each has potential applications to improve the health of refugees and better assist those implementing interventions in humanitarian settings. The humanitarian sector now has the opportunity to improve collection of routine data, access real time data, improve quality of care, connect healthcare workers and organisations, and provide powerful tools for populations affected by crisis to make their own healthcare decisions. UNHCR recognises the potential for mobile platforms to improve the lives of refugees and host communities, and is currently developing a Global Strategy for Connectivity for Refugees3.

Mobile technologies are helping to widen the reach and versatility of existing eHealth infrastructure to support frontline health workers, providing access to patient information when and where they need it (case study 1). As the cost of connectivity continues to plummet, we are also witnessing a global transformation in the ease with which families can connect to necessary information, sometimes simply by a phone call, and when they need it most.

In the last decade, hundreds of pilot projects across the globe have tested mHealth strategies to increase the capacity of healthcare workers and improve the quality of care they provide. We now have many evidence-supported digital strategies, including targeted text messaging to pregnant women, tailored messages to improve antiretroviral therapy (ART) adherence, and phone-based training of health workers, and these are being used in countries at regional and national levels. Such innovations also provide a means to improve system efficiencies, from worker management to monitoring supply chains, as well as real-time monitoring and reporting of vital events and system performance.

Connecting frontline workers to the systems they support

Community health workers are often the first and only point of care for many people in low- and middle-income settings. Their isolation and often rudimentary training limits their capacity to provide more than basic care, and this is often detached from the broader health system within which they function. Mobile systems now exist to address such gaps, and these are discussed in case study 2. Furthermore, strategies such as BBC Media Action’s ‘Mobile Academy’ have provided continued skills development and training to frontline health workers which can help to integrate them as fully-fledged members of their health systems.

Many drivers, from competitive funding to government expectations, cause the capabilities of new technologies to be exaggerated before they have been field tested and evaluated. Frustrations around the difficulties of improving programme coverage can also drive us to embrace new, promising, but untested solutions. Evidence of impact, scalability, sustainability, and cost-effectiveness is required to drive integration of digital health solutions. However, in just five years, numerous large-scale randomised trials have been completed, and a growing evidence base has allowed the WHO to launch formal guideline development activities. A number of frameworks and categorisations have also been developed. These focus on the issues being targeted and the acceptability of the innovation, rather than the technologies being used to do so.

In Lebanon, an mHealth app has been developed to improve the quality of care for patients with hypertension and/or type II diabetes at primary health care centres. Based on tablet devices, the Sana mobile app can be used by both physicians and patients to keep track of their medical records4. It provides flexibility for displaced populations by enabling physicians to provide patients with their disease history and medications prescribed at every visit by sending an SMS directly to the patient’s phone. The application will also track the date of the next follow up visit, and send an appointment reminder to the patient’s phone. The application improves the patient’s ability to monitor their condition, and provides easy access to medical information in case the patient moves or unexpectedly seeks care from another provider.

Sana is an excellent example of an mHealth tool which meets the needs of Syrian refugees to maintain continuity and quality of care of NCDs, but also benefits the local Lebanese population who also have a high prevalence of hypertension and diabetes.

Case study 2: Communicating with people affected by the Haiti earthquake

TERA (Trilogy Emergency Relief Application) from the IFRC is an SMS text messaging system designed for two way, real time communication between disaster-affected populations people and aid agencies5. The information that it delivers helps to save lives, protect livelihoods, and strengthen recovery from disasters and crises. It also helps to give communities a voice, ensuring that the correct type of aid is delivered to the right places. The Haiti earthquake in 2010 left over 300,000 people dead, more than one million people homeless, and over three million people were affected in some way. Radio and TV broadcasts, posters, leaflet distribution, loudspeaker trucks, and face-to-face discussions were all used as part of the response. However, it was quickly realised that more was needed. As a high proportion of Haitians own mobile phones, the IFRC decided to base the mobile communication system on SMS text messaging.

TERA provided early warnings to more than half a million people in the vulnerable areas on Haiti’s northeast coast. The hotline, operated by volunteers from the Haitian Red Cross, received 710,000 calls during that particular early warning operation. The SMS system was also used for public health promotion campaigns and cholera prevention, reaching vast numbers of people who may otherwise not have received such critical information.

The collaboration between IFRC and one of the local operators to create the SMS communication system has been further developed since the earthquake. Today TERA is able to send geographically targeted messages to disaster-affected people and to send automatic responses to inbound SMS texts, and is being rolled out to over 40 countries vulnerable to disaster.