Find out more
Home How does the economy work? A quick guide to the basics of economics
Published on June 10th, 2021

Ever wondered how the local, national or global economy works? We take a look at some of the key definitions and principles of economics, as well as different types of economies. 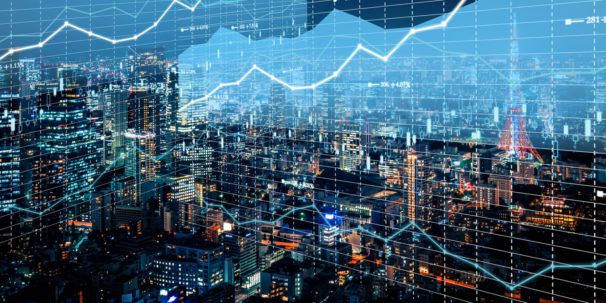 Whether it’s thriving or in decline, the global and local economy is rarely out of the news. But what, exactly, do these terms mean? And how does an economy work? We explore the basic principles of economics, exploring how they affect the world around us and how we influence them.

Let’s start by exploring some terms that are going to crop up throughout the article. These simple definitions can be a useful reference:

What is an economy? A brief summary

Before we look at how the economy works, let’s first explore the term in more detail. As you might expect, it’s a fairly complex concept with many different elements. As this is an introductory article, we’ll keep things simple. However, if you want to learn about the economy in more detail, we’ve provided links to courses and resources that can help you.

You can also check out the video from our open step; what is an economy?

First, let’s explore the different levels of complexity when it comes to an economy:

When we think about a local economy, we’re referring to the interconnected markets and networks within a particular community. The local government, organisations, businesses, and people all contribute to this economy.

Local businesses may purchase their raw materials from sellers who are nearby. These sellers may get grants or tax relief from local councils or governments. People in the area pay tax, work for businesses, and purchase goods and services.

Of course, historically, such local economies were fairly commonplace. As we explore in our open step on globalisation, until the beginning in the 19th Century, consumption and production usually happened in the same place. Food was grown locally, and those in the surrounding area purchased it, for example.

However, as countries, and eventually the entire world, became more accessible and connected, economic webs expanded to become ever more complex. Of course, local economies still exist; they’re just part of something larger.

According to the Bank of England, when we talk of a national economy, such as the UK economy, we’re referring to a system for distributing scarce resources. An economy, they suggest, is based on the fact that resources, such as workers, land and raw materials, are limited. Demand, however, is infinite.

Although this principle of distributing scarce resources is at the heart of any economy, national governments often have radically different approaches to how they mould and manufacture a nation’s economy. That’s why the US economy, for example, is very different from the Chinese economy.

By the time we could move resources and produce across borders, these national economies again became part of a much wider network of interconnected nations.

The world economy (also known as the global economy) refers to the economy of all humans of the world. This definition includes the various economic systems and activities that take place within and between nations.

This broad scope captures the exchange of capital (money and assets) as well as the consumption and production of goods. Thanks to globalisation, international trade, finance and investment all help to power the world’s economy.

So far, we’ve spoken mainly in general terms. We’ve looked at how economies in general function. However, there are all kinds of different economic systems that local and national economies might adopt. What’s more, throughout history, we’ve seen various types of systems emerge, thrive, and decline.

Below, we’ve briefly explored some of the main types of economic systems that have been used and are used today:

This type of economic system was used in the Middle Ages. Essentially a king or ruler ‘owned’ all of the lands in a particular area. That ruler would then allocate land to certain nobles who fought for them. Regular people worked the nobles’ land, paying tax by means of products and services (such as food and farming) in exchange for protection.

Most economies around the world today follow a capitalist system. One of the key characteristics of a capitalist economy is that private entities (as opposed to state-owned) control property and production in accord with their interests. In capitalism, supply and demand mean that market prices can be set to serve the interest of the wider society.

While in capitalism, private companies own the means of production, in socialism, everything is owned by the state or the public. Rather than working for the profit of the individual, everyone works for wealth that is distributed among the people.

Rather than supply and demand setting prices and the production of goods, in a socialist economy, products and services are produced based on usage value – the needs of society. Examples of socialist economies include North Korea and The Democratic Socialist Republic of Sri Lanka.

Much like with socialism, a communist economy aims for ownership of the means of production by the community. It aims to create a classless society where everyone contributes and takes out according to their ability and needs. However, this often comes at the expense of individual freedoms.

Examples of communist countries today include China, Cuba and Vietnam. However, as we explore in our open step, countries can be both capitalist and communist.

Markets are the mechanisms by which scarce resources are allocated. They ensure that consumers and producers can obtain the goods and services they want. When it comes to macroeconomics, the type of market a country has plays a big role in its economy.

There are two extremes here, depending on how much influence a government has over the market. As you’ll notice throughout this article, politics and economics are closely linked subjects. With that in mind, there are three different types of economy at the macro level:

At this extreme, all the factors of production are controlled by the state. This means:

At the other end of the spectrum are free-market economies. Rather than the government controlling decisions, the factors of production are decided by the consumer and producer and usually depend on money. This means:

At the middle of the spectrum is a mixed market – a compromise between the other extremes. This means that there is some level of government intervention, usually setting boundaries in which the free market can operate. This means:

Other types of economies

As we’ve seen, there are different levels at which economies operate. Whether at a local, national or international level, the way we organise our markets and distribute resources can vary considerably. That’s why you’ll often see different phrases related to the economy. Here are some other notable types that you might encounter:

How does the economy work?

A key part of understanding how an economy works is to understand what underpins it and the principles that drive it. We’ve explored the basics of both of these points above, meaning we can now look at the way an economy forms and works and the factors that impact and are impacted by it. 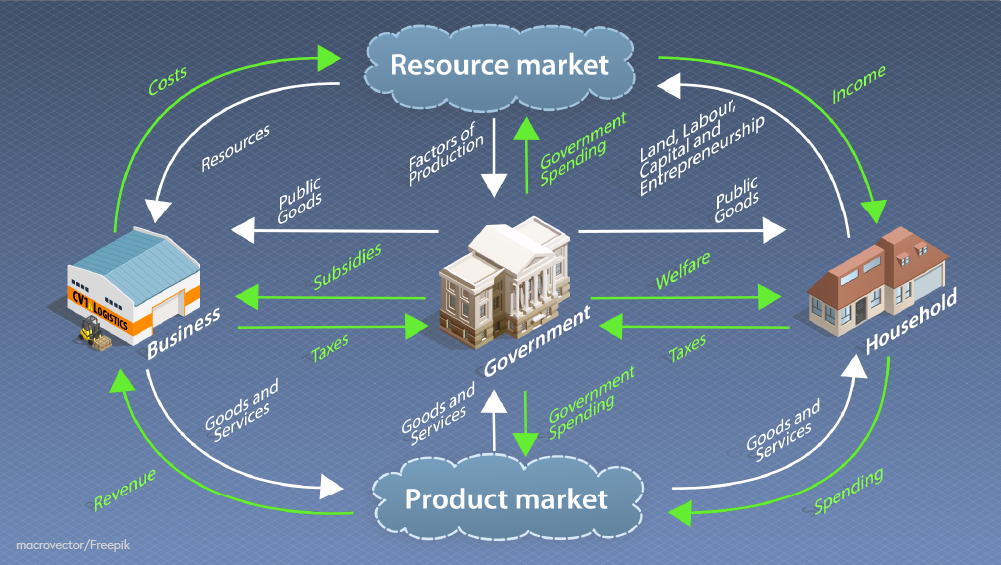 Again, this is a top-level view. If you want to learn more about economics, you can check out our range of online economics courses.

How an economy forms

As defined on the financial website Investopedia, an economy is formed whenever a group of people combine their skills, interests, and desire to trade with others. Essentially, when people start to trade because they think it will make them better off, an economic market forms.

As we saw in our video above, households, businesses, and governments, along with the resource market and product market, form the basis of an economy.

When thinking about the economy from an economics perspective, there are two sides to consider – macroeconomics and microeconomics.

According to the IMF, macroeconomics focuses on the ‘big picture’ of the economy, such as the employment rate, gross domestic product (GDP), and inflation rates. These are the factors that a nation’s government creates fiscal policies in relation to.

Microeconomics looks at the more granular detail of an economy. They explore how households and businesses make financial decisions related to factors such as the impact of supply and demand on a market.

Both micro and macro factors influence the way an economy works, showing just how much complexity there is in this area.

The forces that impact an economy (economic indicators)

So, an economy works by creating a network of markets composed of buyers and sellers. These economic markets allocate scarce resources among the players within that market. When we think of a country’s economy, we’re usually thinking in terms of macroeconomics. Similarly, when we’re thinking of the individual markets in the network, we think in terms of microeconomics.

So what determines how well or poorly an economy performs? As we explore in our open step on economic factors, some of the aspects that influence an economy include growth, unemployment rates, inflation, interest and exchange rates, and commodity (oil, steel, gold, etc) prices. These factors affect the income and purchasing power of households and organisations.

When we measure the success of a national economy, we talk in terms of gross domestic product – the value of the country’s finished goods and services in a specific time period.

The impacts of an economy

We’ve learned that the economy is all around us and that we all play a part in it. But how does the economy affect our day-to-day life? As you might expect, there are several factors to consider here. We’ve outlined just a few of them below:

Again, this is a fairly simplified explanation of these points. In reality, there are many complexities and mechanisms that determine the economic impacts on individuals, organisations and nations. It’s linked to the way societies grow and develop, and can be a force for change.

“The economy is in constant evolution and the digital revolution of the past decades have inspired a number of companies to address various consumer needs and drive inclusion.”

He also outlines the fact that tech companies can impact both the local and global economies. Whether it’s through access to education or providing innovative banking services, technology can be transformative.

So how does an economy work? Well, it’s complicated. However, in essence, economies work by distributing scarce resources among individuals and entities. A series of markets where goods and services are exchanged, facilitated by capital, combine to make an economy. These networks exist at a local, national and international level.

Economies can take many different forms, focus on various priorities, and have different levels of government intervention. On both a micro and macro level, there are factors that determine how well or badly an economy performs. Similarly, our lives are affected by the various ebbs and flows of the systems we’re a part of.