This article details some of the current ongoing initiatives that are in place to fight antibiotic resistance. 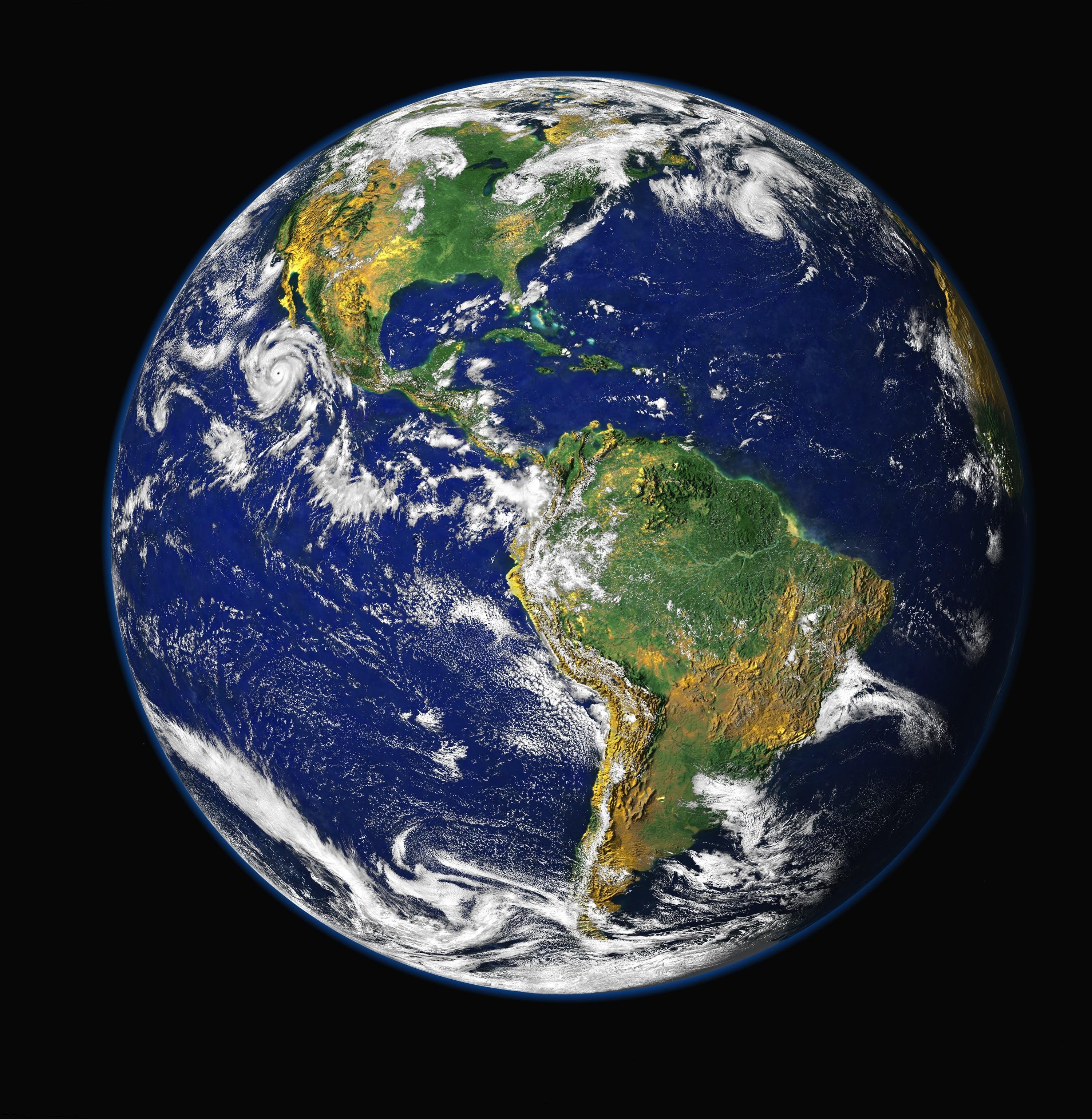 Over the last few years, political commitment to address antibiotic resistance has markedly increased. Antibiotic resistance is now widely recognized as  one of the major threats to global health and therefore countries and international actors now work together to find sustainable solutions. Below we’ve compiled a selection of ongoing initiatives to fight antimicrobial/antibiotic resistance. Given the complexity of the issue and the constantly changing landscape, it’s important to note that the list is not comprehensive.

In May 2015, the World Health Assembly (WHA) unanimously adopted the Global Action Plan on Antimicrobial Resistance (GAP). The goal of the plan is “to ensure, for as long as possible, continuity of successful treatment and prevention of infectious diseases with effective and safe medicines that are quality-assured, used in a responsible way, and accessible to all who need them”. To achieve this goal, the plan sets out five strategic objectives:
1. to improve awareness and understanding of antimicrobial resistance;
2. to strengthen knowledge through surveillance and research;
3. to reduce the incidence of infection;
4. to optimize the use of antimicrobial agents; and
5. to ensure sustainable investment in countering antimicrobial resistance. According to the plan, all countries are committed to implement actions in their countries, in all sectors of society. The member states of the World Organisation for Animal Health (OIE) and the Food and Agriculture Organization of the United Nations (FAO) have also adopted resolutions on antimicrobial resistance, and WHO, OIE and FAO are all part of the ‘Tripartite’ collaboration, which addresses antimicrobial resistance at the global level from a ‘One Health’ perspective. The GAP marks a transition from encouraging countries to develop national solutions towards a greater harmonization of national and international strategies. The need for immediate action and more concerted efforts was further emphasized by the fact that antibiotic resistance was specifically mentioned as  a threat to global development in the UN’s Sustainable Development Goals (SDGs). This has brought more attention to the exploration of different high-level political fora, which in turn can support the implementation of the plan.

In addition to policy development, there has been an increase in work on new strategies for the promotion of research and development of novel antibiotics over the past years. These involve not only research on the development of new business models for antibiotic resistance, but also substantial financial commitments  on national and international levels to support drug and diagnostic development by providing research incentives. One such example is the Longitude Prize, which is a £10 million prize fund with the aim to identify new point-of-care diagnostics that will help to conserve antibiotics.

This content is taken from
Uppsala University online course,

View Course
The Innovative Medicines Initiative (IMI) is a partnership between the EU and the European Federation of Pharmaceutical Industries and Associations (EFPIA). Its aim is to speed up the development of better and safer medicines for patients by facilitating collaboration between the key players involved in healthcare research, including universities, the pharmaceutical and other industries, small and medium-sized enterprises (SMEs), patient organizations, and medicines regulators. The already mentioned projects ENABLE and DRIVE-AB are both projects funded by IMI. With a budget of €3.3 billion for the period from 2014-2024, IMI is currently Europe’s largest public-private initiative in the life sciences. There is also increased awareness of the need to strengthen health care systems in order to address antibiotic resistance, especially by providing assistance for building surveillance capacities in low- and middle-income countries (LMICs). One such example is the US-led multilateral and multi-sectorial initiative the Global Health Security Agenda (GHSA). The GHSA is an effort between over 40 countries to enhance global capacities to prevent, detect, and respond to infectious disease threats in LMICs. The initiative was set up in 2014 and seeks to invest into capacity building, primarily in the areas of infrastructure, equipment, and health care personnel. Based on a ‘One health’ approach and in line with the GAP, the GHSA supports work that is coordinated by WHO, OIE and FAO to develop an integrated and global package of activities, including combating antibiotic resistance.

“…we must come together to prevent, and detect, and fight every kind of biological danger – whether it’s a pandemic like H1N1, or a terrorist threat, or a treatable disease” — former US President Barack Obama

Moreover, antibiotic resistance is increasingly being perceived as a social problem that must be communicated more widely to the public. Following its adoption as a theme for the World Health Day in 2011, antibiotic awareness is now promoted through annual information campaigns surrounding the European Antibiotic Awareness Day (EAAD). The EAAD takes place on November 18 each year and was initiated by the ECDC to increase understanding of antibiotic resistance and with the aim to curb unnecessary antibiotic use in Europe. Since its inception in 2008, the campaign has grown and spread, with more and more countries joining the initiative. 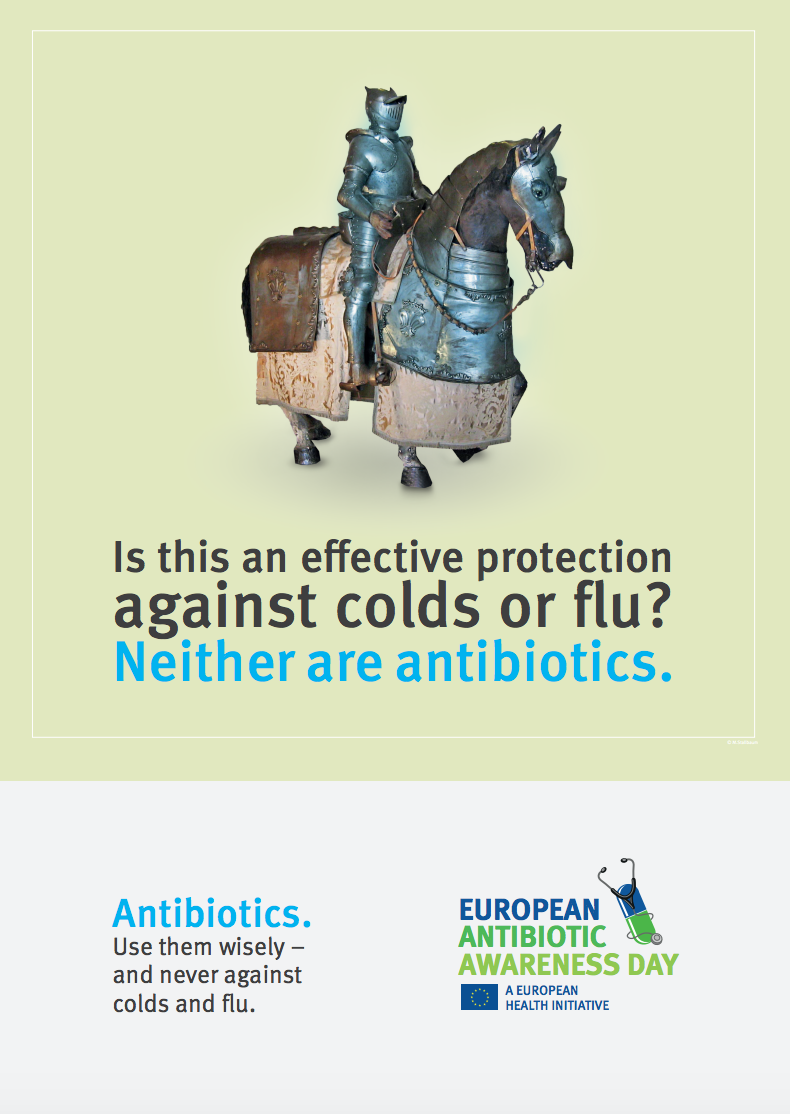 Poster about self-medication with antibiotics from EAAD 2015 (ECDC).
In the wake of the increasingly influential EAAD, WHO has since 2015 promoted the World Antibiotic Awareness Week (WAAW) in a bid to further raise awareness among health care professionals and the public. The theme of the campaign is “Antibiotics: Handle with care”, reflecting the message that antibiotics are precious and non-renewable medicines that should be used only when necessary, only for treating bacterial infections and only after prescription by a certified health professional.

“While there is a lot to be encouraged by, much more work needs to be done to combat one of the most serious global health threats of our time” — Keiji Fukuda, Special Representative for Antimicrobial Resistance in the office of the WHO Director-General

Another important effort is the Review on Antimicrobial Resistance (AMR Review). The review was commissioned by the UK Prime Minister in July 2014 and has the aim to explore and propose concrete actions to tackle antibiotic resistance at both the national and international level. To this end, the review has published a series of influential reports on different issues related to antimicrobial resistance and the final conclusions and recommendations for future actions were published in May 2016. The Sweden-led Joint Programming Initiative on Antimicrobial Resistance (JPIAMR) joins forces across 19 nations to fight antibiotic resistance through effective collaborative actions in areas of unmet needs. A shared common research agenda enhances multi-disciplinary collaboration and ensures that knowledge gaps are quickly identified and filled. Initiated by Center for Disease Dynamics, Economics & Policy (CDDEP) in 2009, the Global Antibiotic Resistance Partnership (GARP) has the aim to provide a platform for developing actionable policy proposals on antibiotic resistance in low- and middle-income countries. In collaboration with currently eight countries (India, Kenya, South Africa, Vietnam, Mozambique, Nepal, Tanzania and Uganda), GARP has conducted national situation analyses focusing on antibiotic resistance and use, and developed recommendations on how to address the resistance situation in each country. ReAct – Action on Antibiotic Resistance is an independent global network for concerted action on antibiotic resistance, which is hosted by Uppsala University. ReAct has nodes located on five continents (Europe, North America, Latin America, Africa and Asia) and has taken both regional and global approaches to mobilize policy action on antibiotic resistance. Their strategy has been to raise awareness on antibiotic resistance to a range of constituencies, develop networks with interested parties, and move forward towards developing national policy platforms with social mobilization in selected countries.

At the Download section at the bottom of this article, you can access the global action plan by WHA, a factsheet about the ‘Tripartite’ collaboration by WHO, FAO and OIE and an infographic about GHSA. At the See also section you’ll find links to all the AMR Review publications and an animation video about antibiotic resistance by JPIAMR.
© Uppsala University